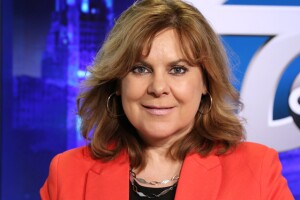 Eileen Buckley is a senior reporter at WKBW. She joined 7 Eyewitness News in March 2019.

Eileen Buckley is an award-winning news reporter who began her radio career as an intern at WBFO in 1985. She has worked at 10 radio stations in Buffalo and Albany, NY.

After 34 years of working in radio journalism Eileen made the switch from radio to television, joining the 7 Eyewitness News team at WKBW in Buffalo as senior reporter.

Eileen has spent most of her career as a news reporter at several top radio stations in Buffalo and Albany, including WBEN, WGR, WNED-AM, WBUF, WECK, WROW & WGNA and WBFO.

Eileen has been the recipient of numerous broadcast awards.

She received a nationally 2019 media award by Mental Health America for excellence in reporting and portrayal of mental health conditions during her prior reporting at WBFO.

Eileen is a nine-time recipient of the prestigious Art Athens Award for General Excellence in Individual Reporting from the New York State Associated Press Broadcasters Association. Eileen also received a first place Edward R. Murrow Award in 2012 for “Best Use of Sound”, and earned a 2012 first place Public Radio News Directors Inc. (PRNDI) Award for spot news on the “Bullying of Jamie Rodemeyer”. The PRDNI’s are the only national contests recognizing outstanding public radio news reporting at local stations.

Eileen currently serves as a mentor with the Buffalo Broadcasters Association, working with students to help shape future broadcast/journalism careers.

In the spring of 2013 Eileen received the “Pinnacle Award” from the Buffalo Broadcasters Association. The Award is presented to an individual who has exhibited outstanding performance over a career span of 25-years or more of service to the radio or television outlet in the Buffalo market.