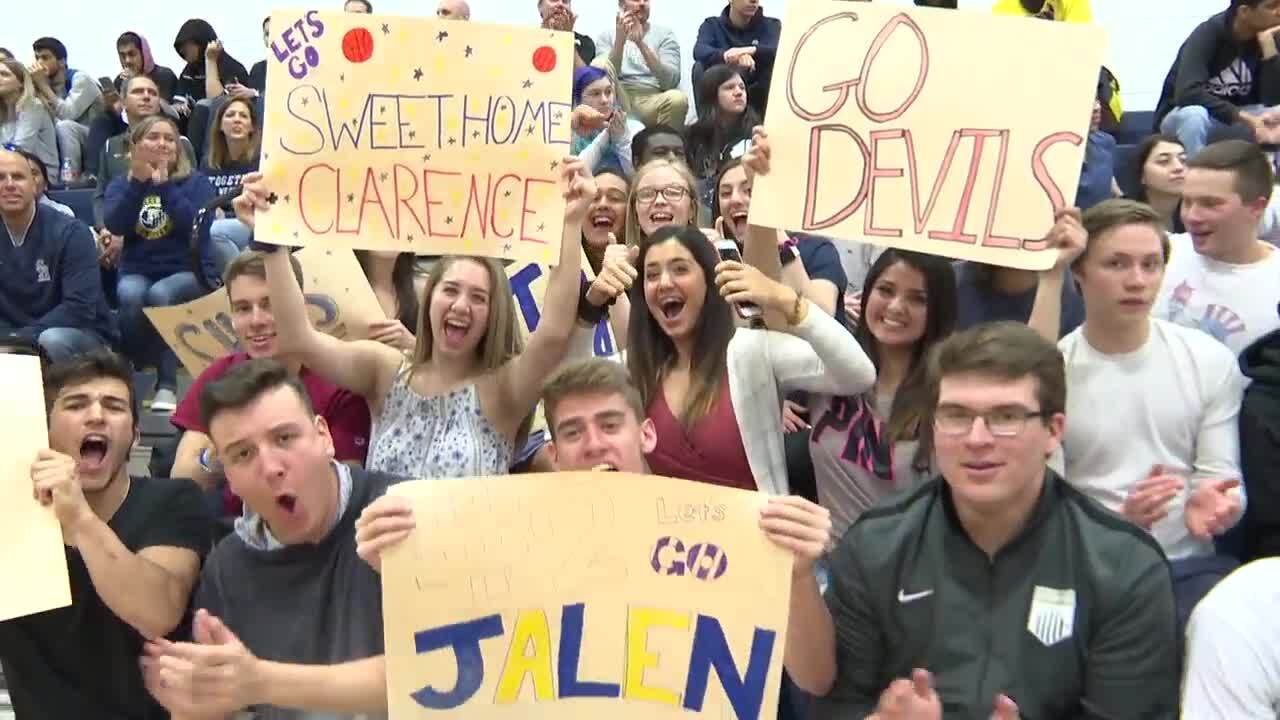 The Bills are headed back to the playoffs and the Sabres are turning things around, but this list is all about the lesser-known superstar athletes in the Western New York community. Our 7 Eyewitness News sports team picked their seven favorite stories of the year. Here they are:

Panama High School senior Sally Watson made history as the first girl to play on the Clymer/Sherman/Panama football team. She started playing in 9th grade, and she stuck with it. Her senior year, she played lineman on the varsity squad.

"Once they put the pads on, there's no difference between Sally and our male players," head coach Ty Harper said. "She's one of the guys on the field."

Two and a half years ago, Nas Jackson's life changed forever. After a seizure in the show, Jackson was diagnosed with systemic lupus. Despite the diagnosis, he held onto his dream of playing sports again.

Faustin Ushindi came to the United States when he was 7. He put ice skates on for the very first time when he was 11. Two years later, he's excelling at ice hockey and playing on a travel team.

"He just grinds, but it's never a grind. It's just fun for him. So I think that's the big thing that keeps him getting better," head coach Ian Trudell said.

Ushindi and Trudell have bonded in their time together with the Wheatfield Blades. Trudell celebrates holidays and birthdays with Faustin and his family, and they've had family dinners together. Faustin says, "it means everything to me that Ian helps me and cares."

Running full speed, vaulting yourself ten feet in the air, clearing a bar and landing on a mat on the other side sounds pretty scary to most people. Now imagine not being able to see the bar.

That's what Ellie DeLucia of Hamburg was up against when she started pole vaulting as a freshman. Ellie is legally blind from surviving a brain tumor as a child.

Sports director Matt Bové caught up with Ellie during her senior year. Ellie says she counts steps to make sure she's vaulting at the right time. She's now a student at Kutztown University, studying special education.

"Do not define a person by their background or their disability," Ellie says. "The only person who defines you, is you."

When he was a freshman at Sweet Home High School, Alex Gauld helped to found the competitive fishing team. Sports anchor Jenna Callari spoke with Gauld in his senior year about the success his team has found.

In his junior year, Gauld's team placed second in a FLW state tournament. Last May, he and his partner set a state record and had their first ever win in a team trail event.

Gauld is now studying at SUNY College of Envornmental Science and Forestry. When we spoke to him, he was planning on competing on the school's bass fishing team.

A love for competitive bass fishing

Julia Barr plays varsity volleyball at Williamsville South High School. As a starter, she had a role to play in the team's Section VI title this past season.

She's doing all of this without her right forearm. Barr tried out for volleyball in middle school, and picked up some tricks to get better at the sport. She blocks and spikes with one hand.

"It's become my favorite thing to do," she said about volleyball. "I really don't know what I'd do without being on this team."

Williamsville athlete inspiring others on the volleyball court

Unified basketball bringing everyone together through daytime games

On a Friday afternoon in May, 50 basketball players from Sweet Home and Clarence High Schools played ball in front of packed seats, but this wasn't a typical game.

This was a unified basketball game. Unified basketball pairs athletes with an intellectual disability with a partner. Together, the duos play the game and learn from each other. Adding to the excitement, the schools got together and scheduled this game for a Friday afternoon during school hours-- so that Sweet Home students could attend.

The Panthers say they hope this becomes a tradition around Western New York.

Okay, we couldn't let this list go by without one Bills reference. The team is having its best season since 1999, and the hype-- and expectations-- are growing.

That makes it all the more exciting when Bills stars Josh Allen and Reid Ferguson agreed to sit down for a game of trivia with sports director Matt Bové. The topic was a favorite TV show among several Bills players-- "The Office."