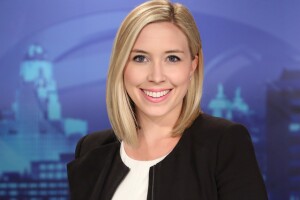 Hannah Buehler is a Multimedia Journalist and anchor on 7 Eyewitness News.

You can watch Hannah reporting weeknights on 7 Eyewitness News at 11 and anchoring on The Now, which airs Monday-Friday on WKBW.

Prior to joining the 7 Eyewitness News team in 2014, Hannah was a reporter for the Buffalo Bills, covering all off the field content.

While reporting on 7 Eyewitness News, Hannah has covered a variety of stories including the New York prison escape, one of the prisoner's ties to Western New York, and the November snow storm of 2014.

Hannah was the E.W. Scripps Company correspondent for the Scripps National Spelling Bee in National Harbor, Maryland in 2016 and 2017. During Bee Week, Hannah reported live for all the Scripps stations across the country, put together wrap stories of the day, interviewed spellers and interviewed the winners of the Bee.

When she's not at work, Hannah has a passion for DIY projects and is usually working on making something. She also loves to read and spend time outdoors, especially summers on Chautauqua Lake.

She loves hearing from her viewers and telling your stories.