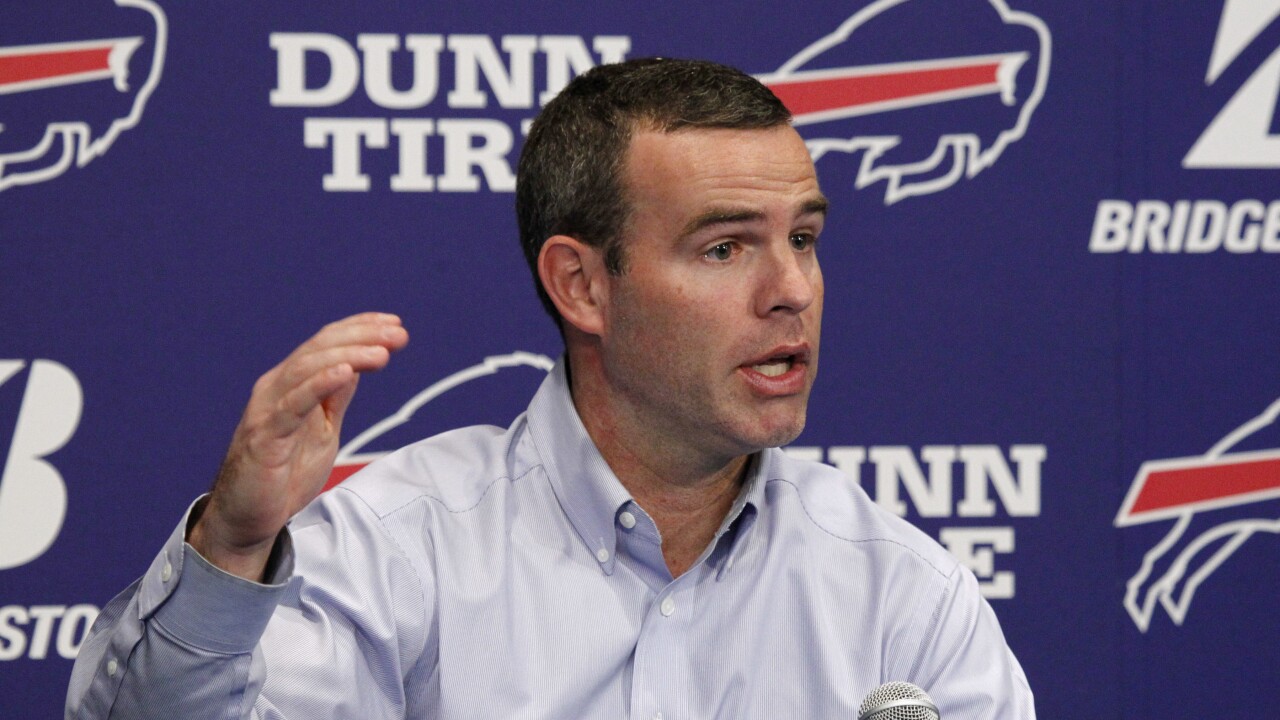 ORCHARD PARK, N.Y. (WKBW) — The arrival of veterans to One Bills Drive yesterday marks another step closer to the 2020 NFL season. But from top to bottom, there are still countless unknowns for the Bills and every other NFL team.

"We still have to hold ourselves to a high standard," Bills GM Brandon Beane said. "We expect playoff caliber practices."

The ramp-up period established by the NFL in place of a typical training camp and preseason keeps players from putting on pads for another two weeks. So the staff will have to get creative about making the stakes higher.

"We have to find a way and use different scenarios. Whether it's hey, if this kicker makes this long kick, we'll cut 20 minutes off meetings. Or hey, no pads tomorrow," Beane said.

The Bills are also facing personnel hurdles: Five players are on the Reserve/COVID-19 list, DT Star Lotulelei and CB E.J. Gaines have opted out, and Jon Feliciano is out for over two months with a torn pectoral. But that's actually helped the

"Technically we are down to 80 [players] even though we didn't cut a bunch of people to get there," Beane said.

Getting down to 80 players doesn't solve all of the problems, though. In order to bring a free agent in to work out, the Bills have to have a roster spot available for that player.

In Feliciano's case, with a likely return sometime in October, he'd have to be taken off the active roster in order to create the space to work out someone who could provide depth.

"I have to get to 79 just to bring a player in to visit. And when I say visit, they can't even come in the facility," Beane said. "They have to have a negative [COVID-19] test before we can [give them a physical], and that physical is outside of our building."

Beane says that takes about five days from start to finish. In training camp, that's not an issue. For any in-season pickups, though, that's nearly a full week before any potential new Bills can practice with the team.

That, in turn, makes practice squad players that much more valuable. Up to 16 are allowed, with four that can be "protected" from poaching each week. But even that's not a guarantee.

"It'll be kind of free access to poach up until Tuesday at 4:00 p.m. [each week] after games are played," Beane said. "We'll be able to designate four guys that we have for the week. And that can change. Each week is a new four on the list."

With 53 roster spots and 16 practice squad spots, the Bills could cut only a total of 11 players between now and Week 1. Any activations from the Reserve/COVID-19 list will require a cut as well.

The Bills' first day that they can be in pads for a practice with contact is August 17th. They open their season at home against the New York Jets on September 13th.