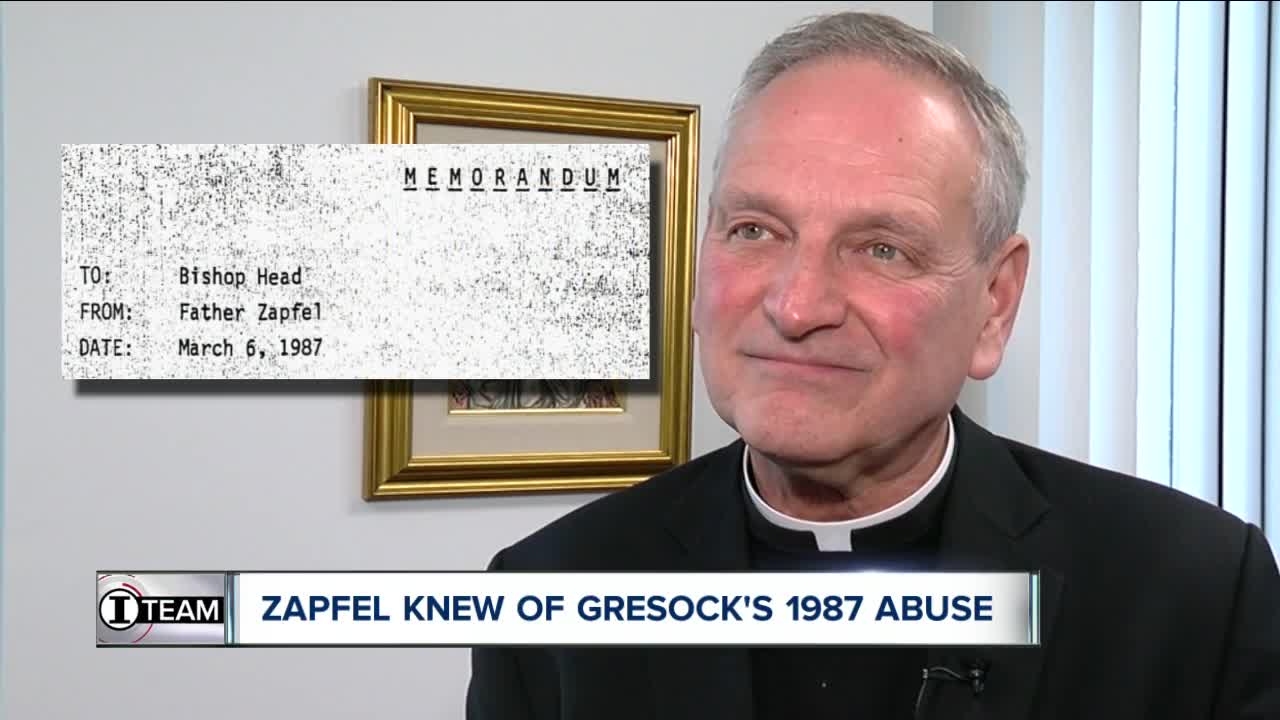 Documents obtained by 7 Eyewitness News show Msgr. Robert Zapfel knew details of a priest's abuse in 1987 -- three decades before he allowed him to celebrate Mass at St. Leo the Great.

At that Mass, Fr. Thomas Gresock was invited to bring up the gifts -- bread and wine, to be consecrated into what Catholics believe is the body and blood of Christ -- even though Zapfel himself investigated child sexual abuse claims against Gresock in 1987 and determined them to be credible, internal documents obtained by the 7 Eyewitness News I-Team show.

The I-Team obtained portions of Gresock's personnel file stored in the secret archives of the Diocese of Buffalo. The file includes multiple envelopes titled, "CONFIDENTIAL" and "MATTERS OF CONSCIENCE AND DISCIPLINE," and stored within is a letter from a Pennsylvania church official describing allegations of a high school freshman that Gresock allegedly molested him around 1987 when the boy was on a visit to his grandparents in the Buffalo area.

Bishop Edward Head sent Father Zapfel -- who was the vice-chancellor of the diocese -- to investigate the matter, and Zapfel typed up a report to Head describing allegations by the 14-year-old that Gresock, in the rectory of a Buffalo Diocese parish, attempted multiple times to expose his genitalia and on one occasion fondled the boy's genitalia after ordering him to pull down his pants.

"...the Priest next said, "Let me show you mine," the report states. "When the Priest stood up, his pants were unbuckled and his zipper down...The Priest moved toward [the victim] and quickly unbottoned and unzipped [the victim's] pants and then pulled them down. The Priest then 'touched' [the victim's] penis and the area around it...[The victim] said that he 'couldn't move' and 'didn't know what to do.'"

The report also states that the victim provided Buffalo Diocese officials copies of his diary and letters Gresock sent to him as corroboration for his allegations. Additionally, two Pennsylvania priests to whom the victim first told the story vouched for his credibility.

"Both Priests agreed that [the victim] was a truthful person, and that he most probably did not exaggerate what happened," Zapfel wrote to Head.

7 Eyewitness News is not identifying the victim, as we do not identify victims of sexual assault without their consent.

Zapfel, in the report's conclusion, said the victim "has been very consistent in the details about what has happened. Both [Pennsylvania] priests testify to his truthfulness. Given the very circumstantial evidence of the Buffalo Priest's letter to [the victim], it would seem that the incidents did indeed happen as related in this report."

But despite the report, Buffalo Diocese officials did not remove Gresock from ministry until 1993. He has been accused of child sexual abuse by other alleged victims, documents show, including in a Child Victims Act lawsuit filed last year. Diocese officials never defrocked Gresock, so Catholics have been paying his salary and benefits since 1993. His case is currently being evaluated at the Vatican, diocesan officials have said.

Through his father, Gresock -- who lives in North Tonawanda across the street from an elementary school and playground -- declined to comment. Zapfel did not respond to multiple messages seeking comment about why he allowed Gresock to celebrate the Mass in priest vestments in his church and to bring up the bread and wine during the controversial Mass.

Zapfel has been front and center during the abuse crisis, holding prayer sessions for victims and urging an end to sexual abuse and cover-ups so the church can heal. But he has never publicly revealed his role in the Gresock case and other cases while he worked at the chancery, and he has come under fire among some Catholics for allowing Fr. Joe Gatto -- accused by multiple men of sexual misconduct, though he denies the allegations -- to return to ministry at St. Leo the Great as senior parochial vicar.

Scharfenberger has apologized for the Mass but also defended his right to hold it, saying abusive priests are part of the "family" of the church.