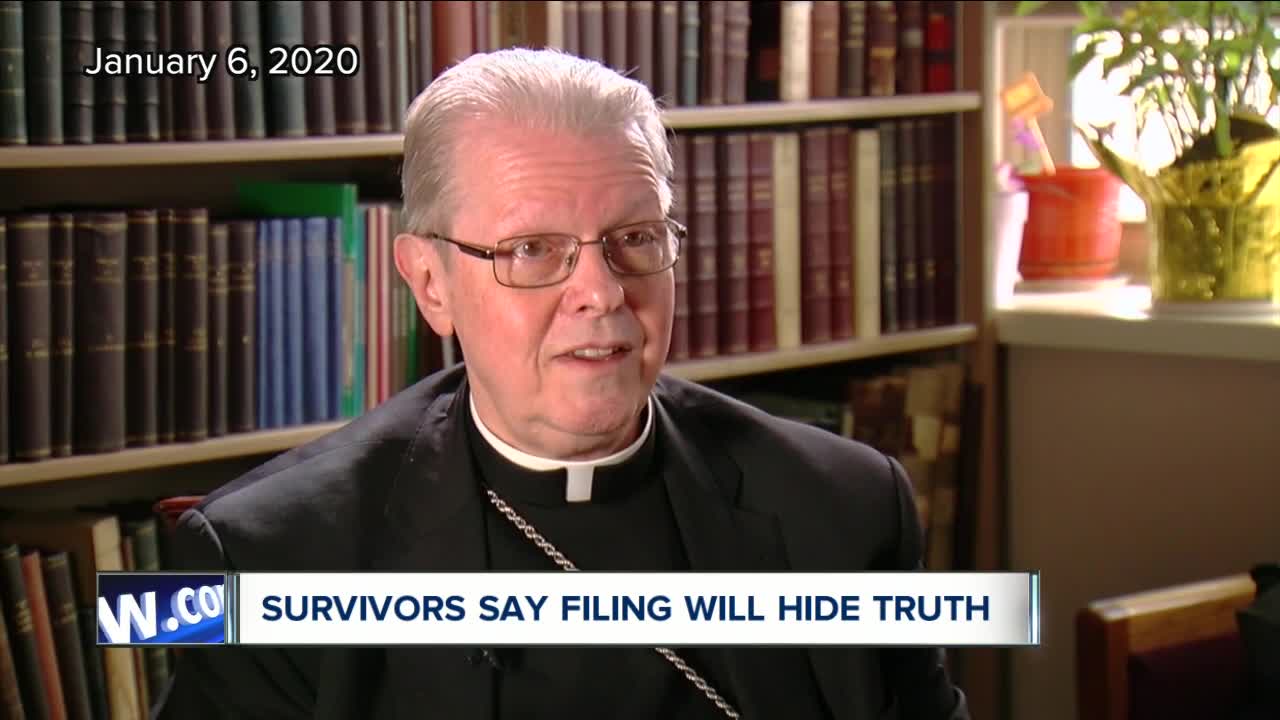 Bishop Scharfenberger explains why he believes abusive priests are part of the "family" of the church.

BUFFALO, N.Y. (WKBW) — Bishop Edward B. Scharfenberger on Friday first apologized for -- and then doubled down on -- his support of abusive priests, saying they are still part of what he calls the “family” of the church.

BISHOP SCHARFENBERGER:
“I really consider every single person, including our priests who may have abused people, as part of our family that I'm responsible to take care of in some way.”

REPORTER:
“I'm sorry, did you just say that the abusive priests are part of the family, as you call it?”

REPORTER:
“So why would a survivor want to be a part of a family where the father figure of the family invites child molesters to be part of the family?”

SCHARFENBERGER:
“Well, first of all, Charlie, I assume you're referring to what happened last Monday.”

“It's something that we do together -- we celebrate Mass,” Scharfenberger said. “You know, I think the idea that the Mass is a reward for virtuous behavior...You know, this is a church of sinners. As far as that man in the cross, there's not a person that I know that he didn't die for.”

Declaring bankruptcy is another reason abuse survivors are clashing with Scharfenberger. They say the filing will give them compensation, but not answers and documents that would reveal details of what the diocese knew about the abusers.

“We don't get to have our clients sit in a room with a bishop or a priest and have them questioned, and that's going to be tough on a lot of our clients,” said Steve Boyd, an attorney for clergy abuse victims. “They wanted that transparency.”

Scharfenberger in January said he would provide abuse survivors with access to the secret files of the priests who abused them.

"Yes, yes absolutely,” Scharfenberger said on Jan. 6. “Absolutely. If a survivor puts that question out and is interested [they] should come forward and we'll do whatever we can to be...to let that person know what they need to know and want to know."

But the 7 Eyewitness News I-Team has heard from multiple survivors who say staff members at the Catholic Center have made that process difficult -- even infuriating.

“I called January 14, January 15, asking what the process was,” said abuse survivor Gary Astridge. “Just got voicemail, and never [a] returned response. So to me, that as a survivor, that was extremely insulting not to get any kind of word back.”

Survivor Kevin Koscielniak said an employee cited "labor laws and federal laws" and said there was no process in place to see the files.

“Scharfenberger is really good about saying in public that survivors can come in and see the files,” said Koscielniak. “But that is not the case.”

Survivor Stephanie McIntyre was asked in an email by the diocese’s victim assistance coordinator “what information you are seeking and how this would best assist you” in her healing path.

“I don't think it is any of her or their business as to how this will assist me on my healing path,” McIntyre said.

Additionally, diocesan sources said the diocese made electronic copies of most of the priest files -- with sensitive information redacted -- in September 2018 to comply with a state subpoena, so the files would be readily available, they said.

REPORTER:
“Why can't the diocese just take these files that apply to these priests who abuse these people and put that file on a flash drive and send to the victim? Why are they making them come here into the diocese and making it so much harder for them emotionally?”

SCHARFENBERGER:
“Because not everybody...because we want to make sure that the people that have a right to those files and need to see that get it and that they don't, they're not abused by others who may have other interests in using them. Because some of those files contain confidential information that we're legally unable to release.”

“And [they will] turn it into a financial transaction,” Boyd said. “And it's not a very church-like way to apologize to people that you've hurt.”