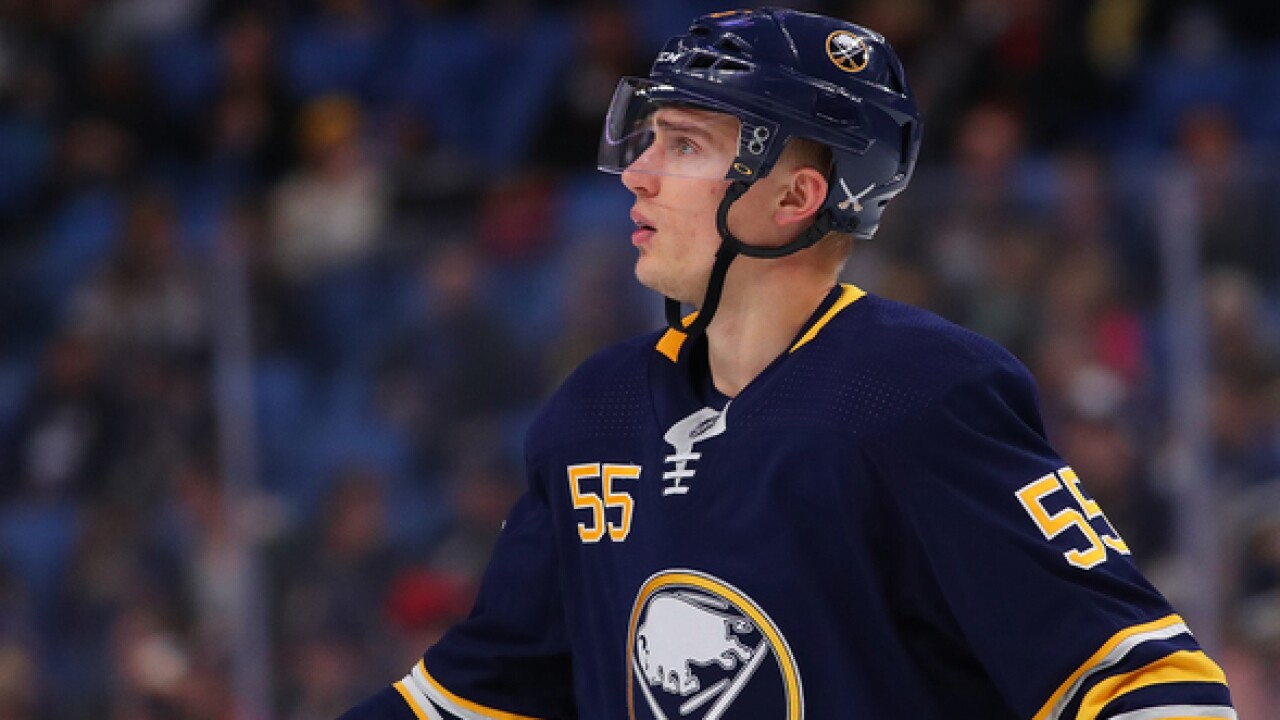 Copyright 2018 Scripps Media, Inc. All rights reserved. This material may not be published, broadcast, rewritten, or redistributed.
Kevin Hoffman
<p>BUFFALO, NY - OCTOBER 30: Rasmus Ristolainen #55 of the Buffalo Sabres during the game against the Calgary Flames at the KeyBank Center on October 30, 2018 in Buffalo, New York. (Photo by Kevin Hoffman/Getty Images)</p>

For only the third time in franchise history, the Buffalo Sabres have won 10 straight games.  Jeff Skinner scored the game-winner in overtime, lifting the Sabres to a 3-2 win against the San Jose Sharks. Rasmus Ristolainen and Nathan Beaulieu also scored for the Sabres, who improve to 17-6-2 with the win.

When it looked like the win-streak might come to an end Jeff Skinner sent KeyBank Center into a frenzy, scoring his 19th goal of the season to seal the win. After two third-period goals from Joe Pavelski, it appeared the Sabres streak may be coming to an end. But just like they've done countless times this season, the Sabres found a way to get the job done.

Your man of the hour, Jeff Skinner #Sabres pic.twitter.com/6KFeijJKwh

"Everybody is contributing," Phil Housley said after the game. "Everybody is playing for one another and it's a very tight group right now."

"We did things right in the summer and we talked to each other about what was wrong," Ristolainen added. "It feels great but the main goal is the playoffs, that's all I want."

Stop me if I've said this before -- Carter Hutton was the Sabres best player on Tuesday, despite allowing two goals in the third period. The Sabres netminder made multiple huge saves, keeping the Sharks at bay. His prettiest came in the first period, snagging a shot from Joonas Donskoi that surely looked like it was destined for the back of the net. If it weren't for another solid game Hutton, this game could've ended very differently.

For as great as Jeff Skinner and Jack Eichel have been for the Sabres this year, Carter Hutton deserves just as much credit. With his win on Tuesday, Hutton has now won eight consecutive games and improves to 12-6-1 on the season.

Goal of the Year

Rasmus Ristolainen nearly caused a small earthquake inside KeyBank Center after undressing All-Star defenseman Brent Burns and scoring the prettiest goal of the season for a player wearing blue and gold. In the second period, Tage Thompson connected with a streaking Ristolainen, who scored the Sabres first goal of the evening. Ristolainen perfectly slid the puck through his legs, giving him a better angle. He then immediately cut across the crease, beating Martin Jones with a pretty wrister top-corner.

For my money, it was the most impressive play from a Sabre this year. To pull off that move, against such an elite defender with so much speed is simply incredible. Oh yeah, and then Ristolainen capped things off with an incredible celebration.

10-game win streaks are cool but Rasmus Ristolainen has his eyes set on something else #Sabres @WKBW pic.twitter.com/Yw0nfKV5XY

After practice on Monday, Tage Thompson said he's starting to feel comfortable and build confidence. On Tuesday that was evident, as the young winger fired off some quality shots and picked up his fourth point in five games. Thompson still has some areas that he needs to clean up but his emergence has been a huge benefit for the Sabres...quite literally.

Tuesday was so much more than a hockey game. In the final minutes of the second period, fans held up their "The Reason Why I Fight:" signs as the Sabres celebrated Hockey Fights Cancer night.

He was surrounded by others who have had their own run-ins with cancer. Among the group, Ashley Johnston, a good friend of mine. Ashley was diagnosed with breast cancer in 2015. If you have a minute, check out her story as told by my colleague Katie Morse.

Cancer affects us all. For as many gripes as I have with the NHL, it's nice to see a night dedicated to those who fight