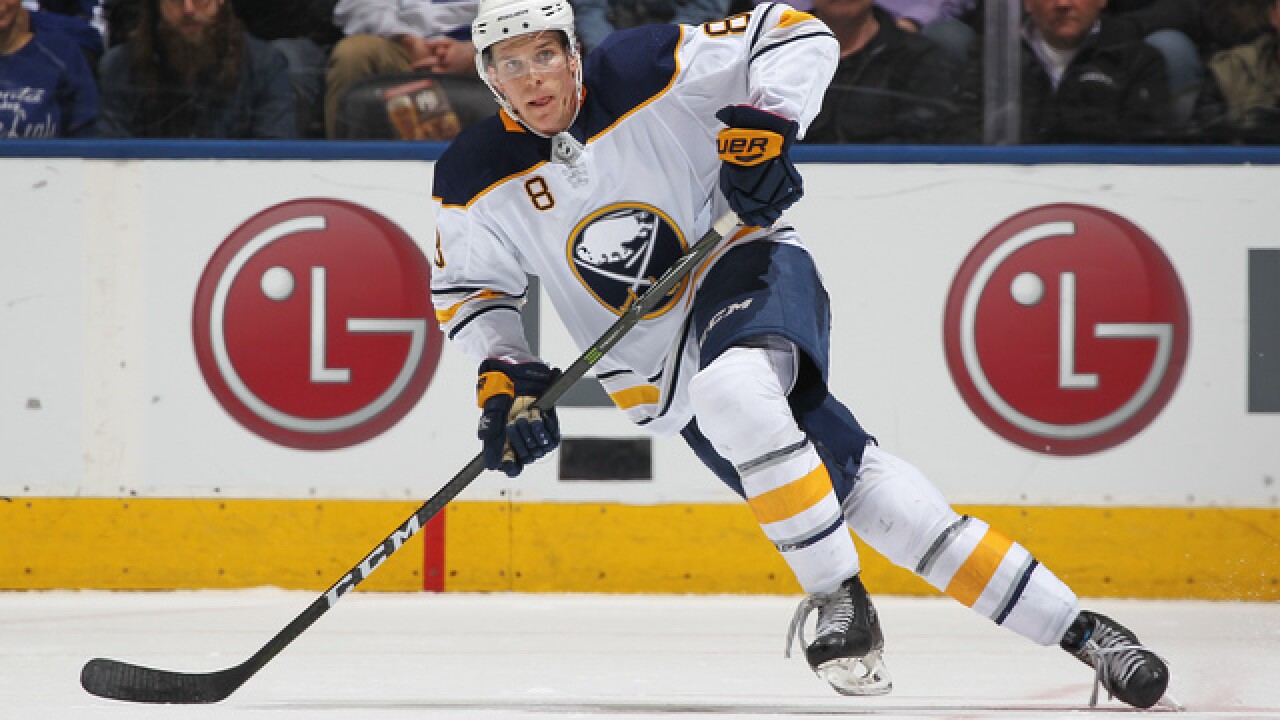 Copyright 2018 Scripps Media, Inc. All rights reserved. This material may not be published, broadcast, rewritten, or redistributed.
Claus Andersen
<p>TORONTO, ON - APRIL 2: Casey Nelson #8 of the Buffalo Sabres skates against the Toronto Maple Leafs during an NHL game at the Air Canada Centre on April 2, 2018 in Toronto, Ontario, Canada. The Maple Leafs defeated the Sabres 5-2. (Photo by Claus Andersen/Getty Images) *** Local Caption *** Casey Nelson</p>

After starting the preseason with two wins the Buffalo Sabres have dropped three straight, falling to the Columbus Blue Jackets 4-2 on Tuesday in the Kraft Hockeyville game in Clinton, New York. Casey Nelson and Sam Reinhart scored for the Sabres, who have only two preseason games remaining.

In his three preseason appearances, 2018 No. 1 pick Rasmus Dahlin has had his fair share of ups and downs. With a national audience watching, Dahlin had his most impactful game thus far, pinching into the play on several occasions and tallying his first assist.

These guys are good. 😍 pic.twitter.com/U2Z9aTB7WW

Undoubtedly the play that stands out the most was his aforementioned assist on Sam Reinhart's second-period goal. While on the power play, Dahlin fired a perfect pass to a streaking Jack Eichel, who found Reinhart camped in front of the net. If Dahlin's pass is off the mark or a second later, the Blue Jackets would have been in a position to block the passing lane. There will be mistakes but there will also be awesome plays like the one we saw on Tuesday.

Brendan Guhle is going to be a solid NHL hockey player. But on Tuesday he struggled and with the current players on the Sabres roster, I wouldn't be surprised if he started the year in Rochester.

These players will almost certainly be on the Sabres opening night roster if they are healthy next week:

That leaves Casey Nelson, Nathan Beaulieu and Brendan Guhle likely competing for two spots. Of the three, only Guhle can be sent to Rochester without having to clear waivers. While Beaulieu certainly struggled last season -- I don't see the Sabres waiving him right away. Nelson, who was impressive last season in Buffalo, would almost certainly be claimed if the team tried sending him to Rochester.

While it may be disappointing to some fans, a bit more time developing for Guhle in Rochester isn't the worst thing. Remember, he just turned 21-years-old.

For the second straight game the Skinner - Eichel - Reinhart trio was the Sabres best combination. It seemed like every scoring chance the Sabres had happened when this line was on the ice. At this point, I'd be very surprised if this line was broken up in the next week. Chances are, they'll be the first line you see on the ice when the Sabres open the regular season next week.

I'll be missing you

It was noticeable that the Sabres were without Tage Thompson. After his impressive debut this preseason I don't see a scenario where he isn't on the Sabres opening night roster. I could certainly be wrong but his size and creativity were missed on Tuesday evening.

Escaping the preseason without any significant injuries is imperative for every NHL club. While the severity of the injury remains unknown, Blue Jackets defender Seth Jones left Tuesday's game early with a lower-body injury. If nothing else, this should be a reminder to the Sabres to give the rest of the preseason off to some of the more established players on the roster. No need to risk injury, especially for the players who have already secured a roster spot.