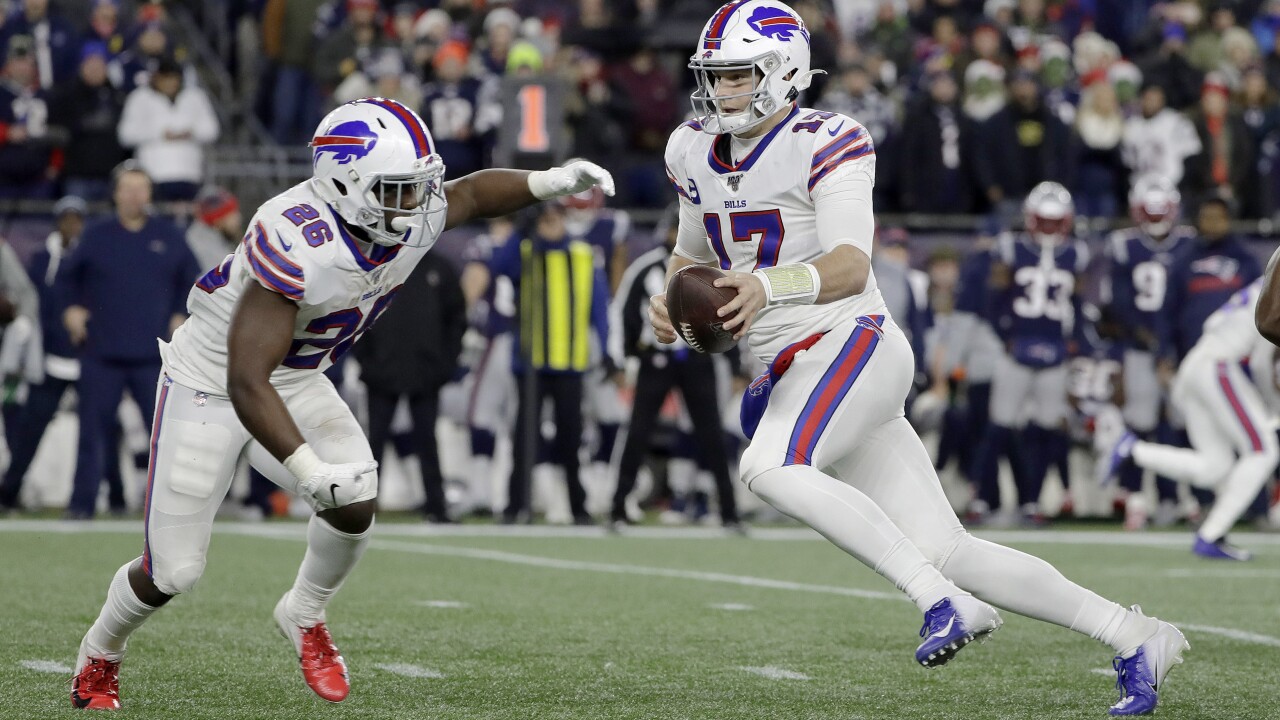 ORCHARD PARK, N.Y. [WKBW] — Can the Buffalo Bills take control of the AFC East with a win against the New England Patriots? Our sports team shares their picks as we get ready for kickoff!

During the Tom Brady and Bill Belichick era, the Buffalo Bills have knocked off the New England Patriots only four times. With Brady now in Tampa Bay, the Patriots are off to their worst start in decades -- but have the tides turned in the division?

All week long, players have avoided the question by talking about the importance of this particular game. While that's fair, and quite frankly, the smart thing to do, something about this week feels different. That could all go down the drain if the Bills lose, but when you look at both rosters, the Bills have more talent.

The Patriots will be withouts Julian Edelman and N'Keal Harry when they line up on Sunday. With Cam Newton's early struggles in the passing game and a watered-down group of weapons, the Patriots should look to run early and often. Expect a heavy dose of Sony Michel, Rex Burkhead, and Damien Harris as the Patriots look to gash the Bills on the ground like many teams have done earlier in the season.

Defensively, New England isn't as dominant as they've been in years past. With plenty of players opting out before the season, the Patriots have allowed an average of 24 points per game. As a unit, they still have a strong secondary but have been exposed at the line of scrimmage.

If the Bills are going to have success, they'll need to beat New England's man coverage in the passing game and hit the edge with speed whenever they keep it on the ground. Stephon Gilmore, who is considered by many the best corner back in the league, won't play either. This could be a huge mismatch for the Bills offense if the conditions allow the Bills passing game to get in a groove.

As long as Bill Belichick is their coach, the Patriots will always be dangerous. But compared to the teams we've seen in the past, this looks like a game the Bills should win and I think they will.

Bills fans, savor this moment. Your team has a chance to beat the Patriots for the first time since 2016 and hand the Patriots their 5th loss of the season... in week 8.

The Patriots are not the same team we've seen over the last two decades but despite their current three-game losing streak and struggles as of late, I think this one will be close. What the Patriots do well is run the ball. They're 4th in the league when it comes to yards per game and with a dual-threat QB in Cam Newton, can utilize not just their backfield but their signal caller on the ground when they need to. The Bills defense has had their highs and lows against the run but given Sunday's forecast and the way the Patriots run the ball, I wouldn't be surprised if they put more guys on the line to try and close up some of those holes.

On the other side of the ball, the Bills offense has a lot more weapons than the Patriots do when it comes to stopping those weapons. I think the Bills will be able to move the ball, it'll just be about whether they can capitalize more than they did last week against the Jets. I think the run game will be big in this game and the Bills shouldn't be afraid to put trust in their young backfield, especially if it's working early on.

I think it's going to come down to the 4th quarter and I think Bills fans will be celebrating their 6th win of the year.

So even with the absence of Stephon Gilmore, I'm sticking to my guns with my prediction from Leading the Charge. And here's why: the Bills have a knack for playing down to their competition. We saw plenty of it in 2019 against the Giants and the Bengals. It got the better of them in their losses to the Browns and the Eagles, too.

This year, they've done the same against Miami and when they visited the Jets last week. If you do that against one of the greatest coaches of all time, even with a much less talented team at his disposal, Bill Belichick will make you regret it.

Weather's going to be a factor, too. It impacted the passing game against the Chiefs a few weeks ago; and Bills' run defense was absolutely gashed by Clyde Edwards-Helaire. The 2019 Bills were built for bad weather football. But all signs point to the 2020 Bills being the opposite.

The talent disparity should still be enough for Buffalo to get a win. I expect a big game out of Zack Moss will help the Bills put this one in the bag. It should be a monkey off of Sean McDermott's back, and it should help the Bills tighten their grip on the AFC East midway through the season.