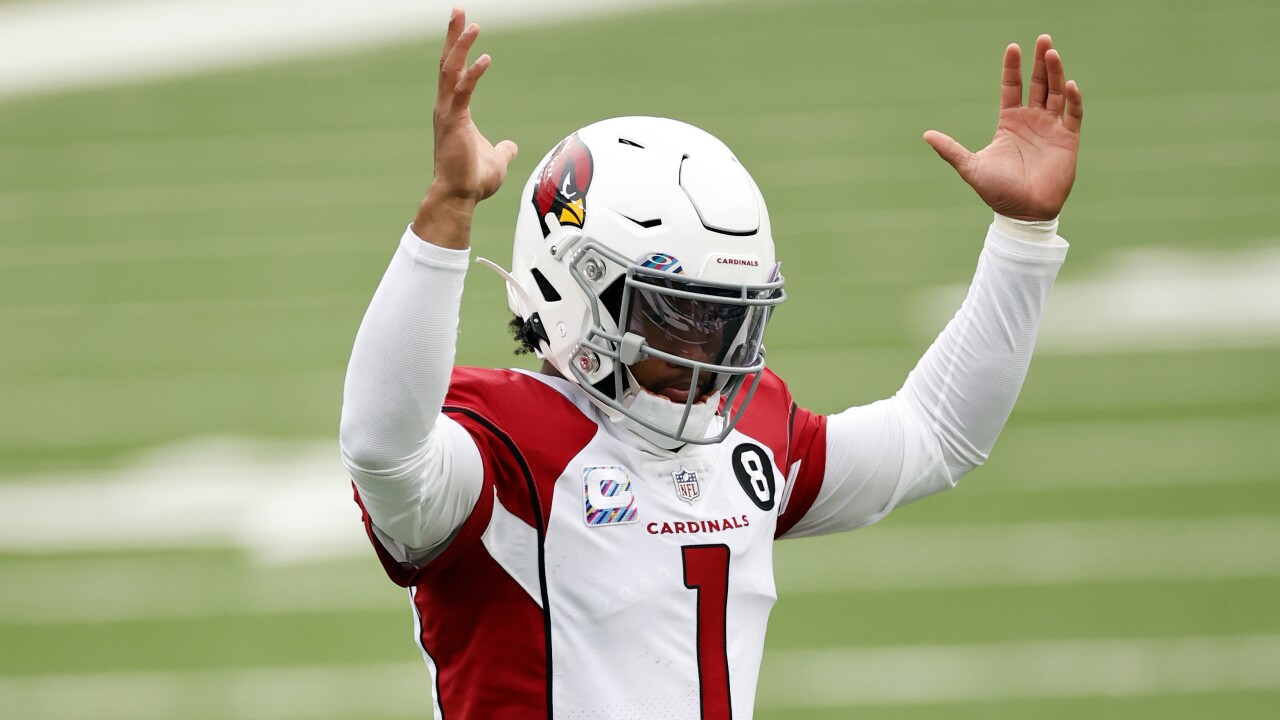 Adam Hunger/AP
Arizona Cardinals quarterback Kyler Murray (1) reacts after a touchdown against the New York Jets during an NFL football game, Sunday, Oct. 11, 2020, in East Rutherford, N.J. With the NFC East a total mess, the conference's West Division is so strong that three teams, possibly all four, figure to challenge for the playoffs.(AP Photo/Adam Hunger)

BUFFALO, N.Y. [WKBW] — For one last time before their bye week, the Buffalo Bills [7-2] will look for a win against the Arizona Cardinals [5-3] in Phoenix. Both teams feature prolific offenses and defenses with questions. Can the Bills head into the bye week with a win? Here’s what our sports team thinks:

Can the Bills win another track meet against the Arizona Cardinals like they did last Sunday against the Seahawks? This season the Bills offense has been inconsistent. Some weeks they look like one of the most dangerous units in the NFL. Other weeks, they can't score a touchdown against the Jets. Now that we're nine weeks into the season I believe they're much closer to the prolific team we watched against the Seahawks than the group that struggled against the Titans, Chiefs, and Jets.

Arizona's defense is much better than the Seahawks but they're average compared to the rest of the league. Through nine weeks, they're allowing 370 yards of offense and 22.5 points per game. Expect the Cardinals to use Patrick Peterson to cover Stefon Diggs which could leave some favorable matchups for John Brown, Gabriel Davis, and Cole Beasley. Both Zack Moss and Devin Singletary will likely be featured more than they were against the Seahawks, but this is another game when the Bills should let Josh Allen throw it around the yard.

On defense, the Bills will be without Josh Norman, Levi Wallace, and Dean Marlowe after they were placed on the COVID-19 list Saturday. This is a huge blow to the Bills because there will be plenty of favorable matchups for the Cardinals offense. If Tre'Davious White covers De'Andre Hopkins, which is no small task, both Larry Fitzgerald and Christian Kirk will go against cornerbacks at the bottom of the Bills depth chart. And then there's Kyler Murray, who is just as dynamic on the ground as he is in the air. Arizona enters this game with the NFL's top offense and if the Bills are going to get a win, they'll need to force some turnovers and pressure, just like they did against the Seahawks.

That's no small task when you consider the opponent and this should be a close game -- but I'm sticking with the Bills as they look to head into the bye week with a win.

I love this matchup for so many reasons. Whether it be Josh Allen vs. Kyler Murray, Patrick Peterson vs. Stefon Diggs, or Tre'Davious White vs. DeAndre Hopkins, this is going to be a really fun one to watch.

This is a game the Bills need to win, especially since they have the Bye the following week. Going into the break with an 8-2 record and momentum is important now more than ever if they want to maintain that AFC East lead and build off what they've been able to do so far.

The Bills defense will have their hands full with Kyler Murray, a QB who's really dangerous on the ground... but the Bills have been able to contain dual-threat QBs so far this season and hey, when you go up against Josh Allen every day in practice, you're bound to get a lot of practice in that category. The Bills offense needs to once again go punch-for-punch, just like they did with the Seattle Seahawks because you can expect the Cardinals to put up big numbers.. in fact, they lead the NFL right now with an average of 422 offensive yards a game. Each side of the ball is pretty even keel and it's going to come down to which team makes the least amount of mistakes and takes care of the football.

Normally I'd go with the home team in a game like this but.. I'm going with the road team. Give me more of what the Bills displayed last week.

The only safe bet in this game is the over. I know the Bills are riding high, but on the road, and going into a bye week, this could wind up being a trap game for them. Look no further than the Bills' other NFC West opponents, and you'll see Buffalo's tendency to let the other team back into the game in the second half.

That's exactly how Kyler Murray and the Cardinals have stolen some of their best wins this season. The halftime adjustments on both sides of the ball are unreal. So is Murray's danger as a runner. The Bills have faced improvisers who can extend plays, but they haven't seen a running threat from under center like this since Lamar Jackson in 2019.

The good news is, and this is something the Bills have done all season, that Buffalo can take away teams' primary threats (see: Josh Jacobs, Derrick Henry, Tyreek Hill). If they can keep Murray from running all over the field, and contain WR De'Andre Hopkins, the Bills will give themselves a great chance.

Losing Josh Norman and Levi Wallace to the Reserve/COVID-19 list hurts. On a human level, you never want to see anyone contract it. But on a X's and O's level, to lose your CB2 and CB3 in a week where you're also up against Larry Fitzgerald and Christian Kirk? Yikes.

Buffalo's capable of winning this game. And they proved me wrong against Seattle. But I think to get this one in the bag, it's going to come down to Josh Allen getting the ball last and orchestrating a little late-game magic.