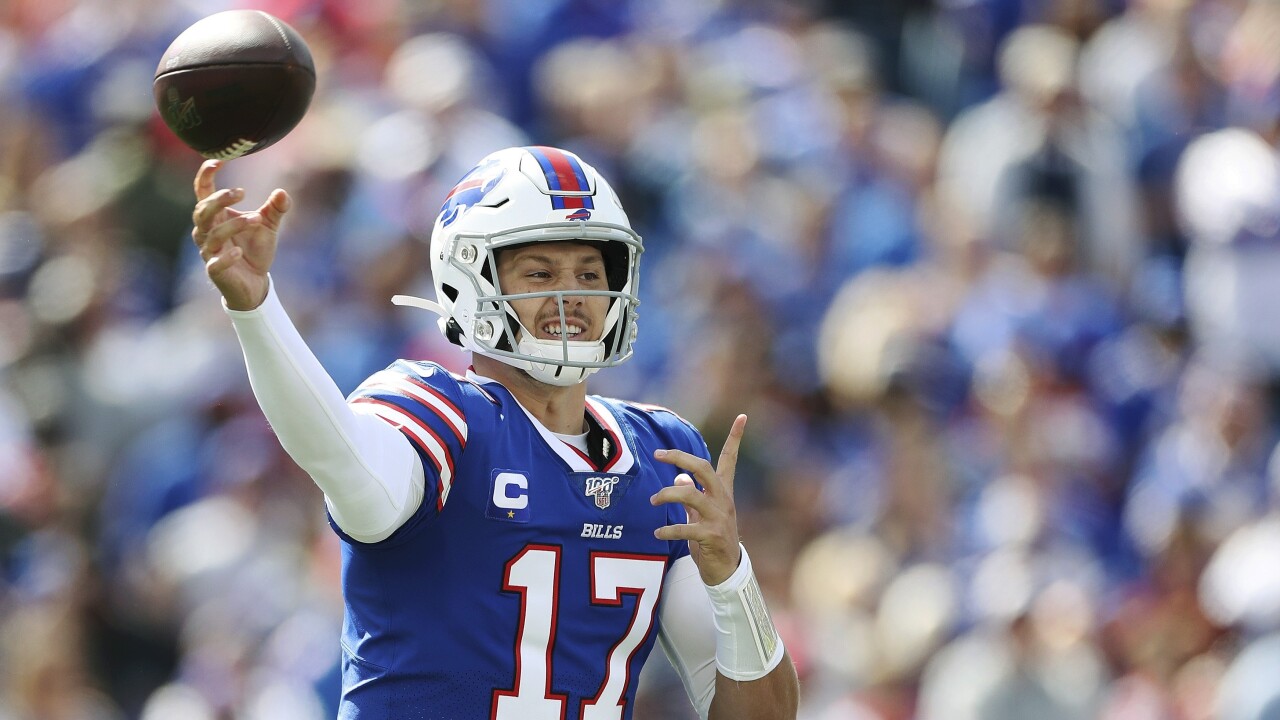 NASHVILLE, TN [WKBW] — Thousands of Bills fans made the trip to Nashville to watch the Buffalo Bills take on the Tennessee Titans. But will they be rewarded with a win? Here's what our sports department thinks:

Will the real Tennessee Titans please stand up? All week I’ve wondered which Titans team will show up on Sunday. Will it be the team that looked great in a rout against the Browns in Week 1? Or the team that allowed nine sacks to the Jaguars?

Coming off a big win in Atlanta the Titans appear to have returned to form and look like a playoff contender. The Bills, on the other hand, are looking to rebound after their first loss of the season. Despite going toe-to-toe with the defending champs in Week 4 and owning a better record, the Bills are an underdog against the Titans.

That’s not necessarily a surprise, especially after the Bills struggles on offense against the Patriots. On Saturday the team announced Josh Allen had cleared the concussion protocol and would start against the Titans. But the Bills bread and butter is their defense. Buffalo is allowing their opponents on average just 16 points a game. If Buffalo can force Titans QB Marcus Mariota to have a day like Tom Brady did last Sunday the Bills would be in a great position to go into the bye week with a win.

The Titans' defense, while not as dominant statistically as the Bills, is also very good. On offense, the Titans love to run the ball. Derrick Henry had 27 carries last week against the Falcons. If Henry gets in a groove early, the Bills could be in trouble.

All week I’ve gone back and forth on this pick and I’m giving the tie to the home team. It should be a close game and I won’t be at all surprised if the Bills come back to Buffalo with a win. But I’m not counting on it.

The Bills made mistakes last weekend but they also had several opportunities to beat the Patriots. The defense continues to keep the team in games and has proven to be a unit that could easily play in the postseason. The offense still needs a little work and it starts with Josh Allen being smarter with the ball. After clearing concussion protocol on Saturday, Allen will try and bring this squad to 4-1 before the bye week... but it won’t be easy.

The Titans defense is a tough unit that hasn’t allowed opposing teams to move the ball all that well, especially on third down. The Titans have Derrick Henry who has given teams some headaches on the ground and Marcus Mariota who has yet to turn the ball over, but their offense as a whole has been up and down over these first four weeks.

I don’t think this is going to be a cakewalk, but I also think the Bills defense will win this game for them.

The Bills are certainly capable of beating the Titans with or without Josh Allen. A defense that can hold Tom Brady to 150 yards passing and a completion percentage below 50 can keep Buffalo in any game that they play. Fortunately for the Bills, Allen is cleared to play.

But the Bills defense faces two unique challenges when they face Tennessee on Sunday: Marcus Mariota is the most mobile quarterback they've faced yet this year, and Derrick Henry might the biggest running back that they'll probably see all season. Sound tackling and QB containment on passing downs are the keys to keeping the Titans out of the end zone.

On offense, the fact that Allen was practicing all week as he worked through the NFL's concussion protocol is a huge plus. Sean McDermott He'll need to be more careful with the football to ensure a victory.