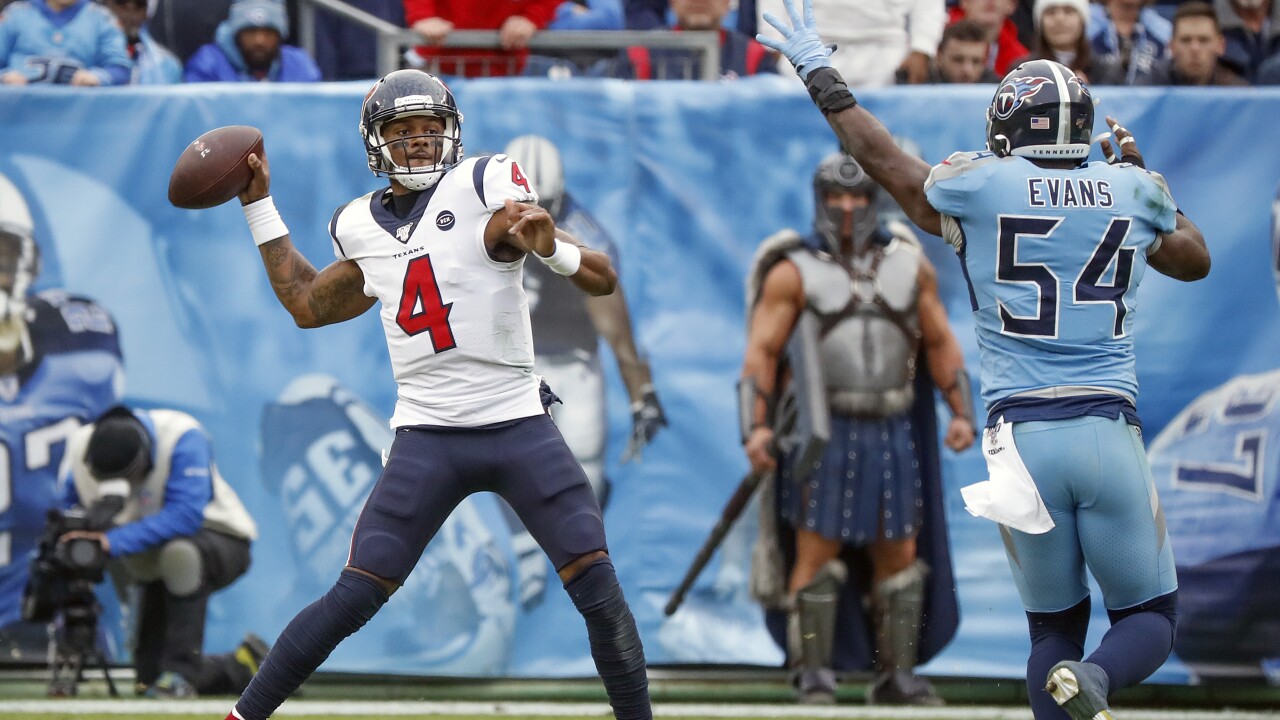 HOUSTON, TX (WKBW) — For the second time in three seasons, the Buffalo Bills are in the playoffs. On Saturday the team will take on the AFC South Champion Houston Texans. But can the Bills get their first playoff win since 1995 and keep their season alive?

While the Texans have the star power, the Bills have the depth. Despite dropping three of the last four, the Bills matchup well with the Texans and could very well leave Houston with a win.

On offense, QB Josh Allen should be able to make some plays against a Texans’ defense that has some weaknesses. Despite the return of JJ Watt and explosive linebacker Whitney Mercilus, the unit as a whole can be attacked.

As my Uber driver told me Thursday, “the defense stinks.”

I’m not willing to go that far, but after games against the Ravens, Steelers and Patriots, there should be some plays to be had.

Defensively things get a bit more complicated. Deshaun Watson is a baller and DeAndre Hopkins is one of the best wideouts in the league. For as talented as Bills CB Tre’Davious White is, Hopkins can create problems for whoever he lines up against.

If fellow Texan WR Will Fuller can’t go, that will be a huge break for the Bills. He has the ability to stretch the field opposite of Hopkins and has been a big play threat since he’s entered the league. As of Saturday morning, Fuller is questionable. But there have been several reports that Fuller is not expected to play.

Bills CB Levi Wallace is also questionable and was limited in practice on Wednesday and Thursday. If he can’t play, the Bills felt on former Texan Kevin Johnson to take over the starting roll. Johnson has flashed this season but the Bills love using a rotation in the secondary.

Houston could absolutely win this game and they very well might. But from a matchup perspective I don’t think the Bills could’ve asked for a better Wild Card matchup. It won’t be easy but it’s put up or shut up for an organization that hasn’t won a playoff game since Bill Clinton was President.

For the second time in three years, the Buffalo Bills are playing in a postseason game. But making it to the postseason, in my opinion, doesn't define this season as successful; winning at least one playoff game does.

The Bills and Texans matchup is one we've been keeping an eye on because it's one the Bills can certainly take advantage of. Yes, the Bills offense has been so up and down lately but the Texans defense has struggled in so many areas this season. The unit has a really hard time stopping the run so this could be a HUGE day for Devin SIngletary with some help from the offensive line. Yes, J.J. Watt is making his return but I don't see him being the difference maker.

The difference maker, in my opinion, will be the Bills defense. They’re the strongest unit on that field tomorrow on both sides of the ball. Yes, I know they have DeAndre Hopkins but the Bills have Tre White who’s been doing a phenomenal job shadowing the opponent’s best receiver.

Two years ago, the Bills cleaned out their lockers following Wild Card weekend. I think those lockers will stay in tact for at least another week.

At the start of the season, I honestly wouldn't have chosen the Bills to get this far. There's just something about the players, staff, and culture that feels different. They've had their bumps in the road and the team certainly has its flaws, but this is a playoff team.

The defense has played like a playoff team all season. It's just a matter of which offense the Bills get. Aside from some big names getting after the quarterback, Houston doesn't have a whole lot going for them on the defensive side of the football.

JJ Watt will pose a problem. So will Whitney Mercilus. But the former talked about staying disciplined against a mobile quarterback like Josh Allen, so it's not like they'll get to pin their ears back for the entire game.

Another matchup to watch will be Tre'Davious White against De'Andre Hopkins. It's a battle that Hopkins won when the two teams met at NRG Stadium last season. Outside of those two All-Pros, it could be an eye for an eye: No. 2 CB Levi Wallace is questionable and No. 2 WR Will Fuller is doubtful.

The Bills are capable of winning this game. And I think they will. They just can't have the offense disappear for stretches at a time like we've seen the last few weeks.