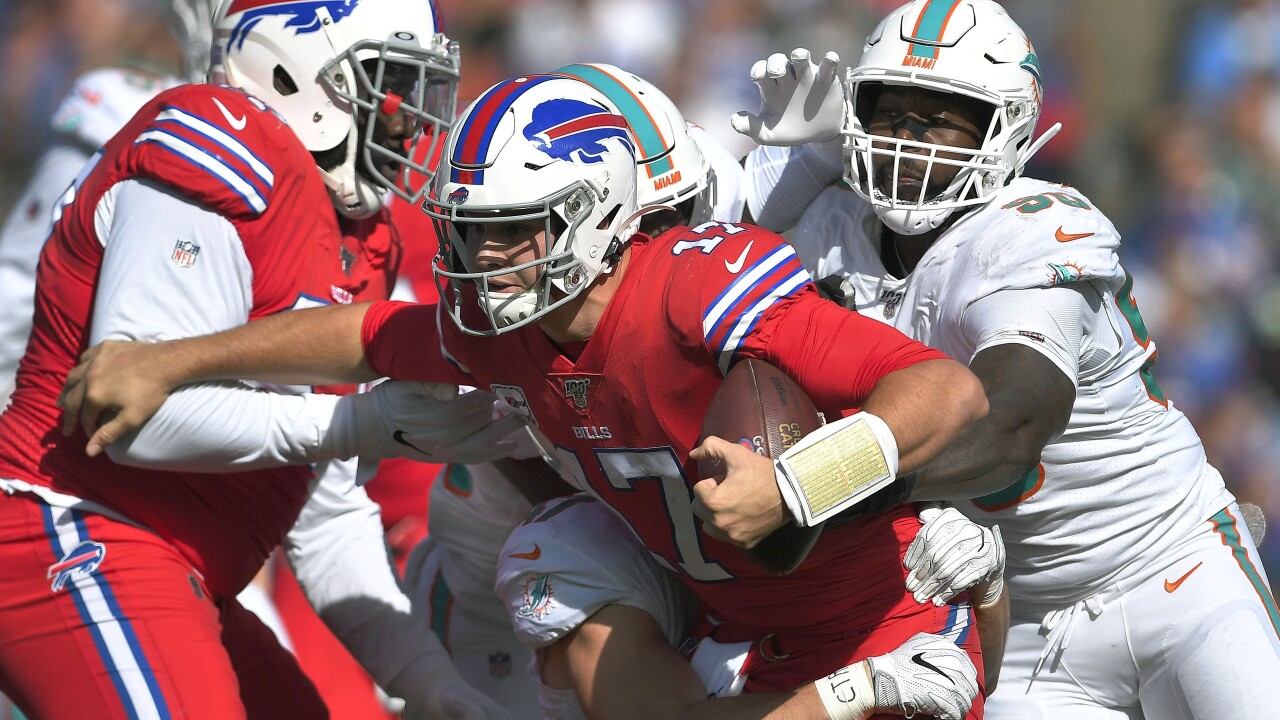 MIAMI, FLA — What seemed like an easy win a few weeks ago for the Buffalo Bills is now anything but. The Miami Dolphins have won their last two games and are playing their best football of the 2019 season. But will it be enough to give the Bills their first back-to-back losses of the season? Here’s what our 7 ABC staff thinks:

It’s time for the Bills to make a statement. So many times this year they’ve squeaked out wins or fallen just short. Sunday needs to be different. When they step onto the field against the Miami Dolphins the Bills need to dominate from start to finish, proving they truly are a playoff team.

Miami is rolling, with two straight wins. Not bad for a team that a few weeks ago looked like it was trying to lose. It’s amazing what a little Fitz-Magic can do. But the Bills are still the more talented team and despite a 6-3 record should be the more desperate team. With the AFC wild-card picture getting more crowded the Bills need to stay a few steps ahead. If they can’t do that against the Dolphins, they don’t deserve to be playing in January.

Josh Allen: I have a lot to work on and I’m no where near where I need to be and where I want to be #Bills @WKBW pic.twitter.com/GBXoERilm7

If you’ve read any of our prediction articles this season you’ll know I don’t often give the Bills the benefit of the doubt. This weekend I am.

The last time these two teams met, the Bills struggled in the first half before managing to pull out a win in the second half. The Bills are the better team and there are no excuses when it comes to this weekend.

Yes, the Dolphins have found a little spark in recent games but that shouldn’t matter. I’d like to see Josh Allen put up a few deep balls (not on 3rd and short) and actually connect on one. I think it’s needed in more ways that one. I’d also like to see Devin Singletary explode against a team he can easily do so against. The Dolphins run defense has given up nearly 150 yards a game. Let the kid loose and see what he does. The team is healthy [Jerry Hughes is questionable] and that defense should have no issues making Fitz’s day a nightmare.

The Bills have found a way to bounce back after every loss this season and this weekend should be no different.

For every loss, it seems like the Bills keep having a game that presents a grade-A chance to right the ship. But Buffalo's games against teams at the bottom of the league standings are running out.

The Bills' last game against Miami was too close for comfort, but this Dolphins team has come to life with back-to-back wins over the Jets and the Colts.

They are no longer the cakewalk that they were supposed to be a month ago. But they still have their weaknesses in their running game (32nd in the NFL) and running defense (30th). The Bills are the more talented team, but they'll have to exploit those weaknesses to make sure they come out on top.