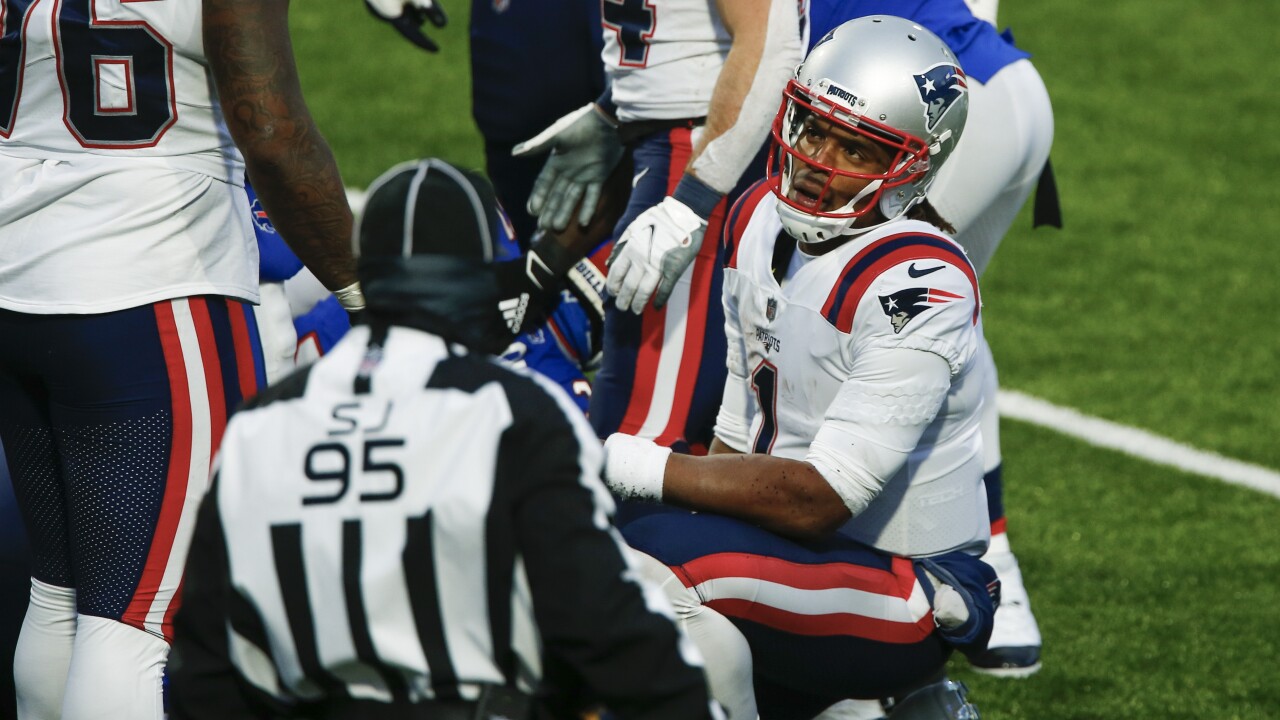 John Munson/AP
New England Patriots quarterback Cam Newton (1) reacts after fumbling the ball during the final drive of second half of an NFL football game against the Buffalo Bills Sunday, Nov. 1, 2020, in Orchard Park, N.Y. The ball was recovered by Dean Marlowe as the Bills won 24-21. (AP Photo/John Munson)

ORCHARD PARK, N.Y. [WKBW] — Sometimes the biggest plays come from the most unassuming players. On Sunday it was defensive tackle Justin Zimmer, who is known as the “quiet assassin” inside the Bills locker room. With 31 seconds left in the game, Zimmer made the play that sealed the win.

“I honestly don't know what to feel right now, I’m still just breathing heavily from the game,” Zimmer said after the game. “[I’m] just excited. It will probably take me a good 24 hours just to realize kind of everything that happened. But right now I’m just excited.”

Justin Zimmer forces the fumble with less than a minute left in the game!

With the Patriots marching, Zimmer shot out of a cannon towards Patriots quarterback Cam Newton as he was rushing towards the line to gain. After moving down the field with ease, it appeared the Patriots were about to score a game-winning touchdown with just seconds on the clock. At the very least, the Patriots would have a chip shot field goal to force overtime. Zimmer had something else in mind, as he punched the ball out of Newton’s hands. It hit the deck and backup safety Dean Marlowe was there to fall on it.

“It was big for our defensive line room, big for Zimmerman to do what he does,” defensive end Jerry Hughes added. “We know what Zim is about. We call him our quiet assassin. “It’s just great to see him go out there and produce and make the plays.”

The man of the hour, Justin Zimmer #BillsMafia @WKBW pic.twitter.com/Am3zNWUbeH

Zimmer was promoted to the 53-man roster just 11 days ago after a strong performance against the Kansas City Chiefs. This season, the 28-year-old defender has played in four games but his made his presence felt, not only on game day but on the practice field.

“I’ve never seen somebody who is as quiet but works as hard as he does at his craft,” safety Jordan Poyer said. “He’s what the Buffalo Bills embody. He’s a Buffalo Bill. I’m happy he’s on our team, he made a huge play, probably the play of the year so far, and we’re going to keep that momentum going.”

“It was huge. Just how relentless our defense played. All week we knew we had to stop the run,” quarterback Josh Allen said. “To a see a lineman run down there and make a play seven eight nine yards downfield and to see a guy who stepped in for Micah making huge game-changing plays for us and allowing us to secure the win there especially in our territory, that’s huge. And that’s what you love to see out of your defense.”

Before joining the Bills, the undrafted 28-year-old spent time with the Cleveland Browns, Atlanta Falcons, New Orleans Saints, and even spent a season in the Canadian Football League. He said his forced fumbled against the Patriots was the biggest play he’s ever made.

“They were all just hugging me and giving me congrats and telling me ‘huge play’ and things like that, just really lifting me,” Zimmer said with a smile. “We’ve got a great team around here, it’s a tight-knit family, it was just great to do it as a team. I might’ve made the last play but everybody played a big part in this. That one play didn’t win us the game, the whole game did.”

“We know what Zim is about. We call him our quiet assassin,” Jerry Hughes added. “It’s just great to see him go out there and produce and make the plays.”

When asked about the ending, Newton said he’s trusted to make a play and he didn’t deliver.

‘It’s unacceptable, I need to protect the ball better,” Newton said. “Coach trusts me with the ball in my hands and I wouldn’t want it any other way but I need to do a better job protecting it.”

So while Zimmer might be known as the quiet assassin by his teammates, he made plenty of noise on Sunday, coming up with the Bills' biggest play of the season.