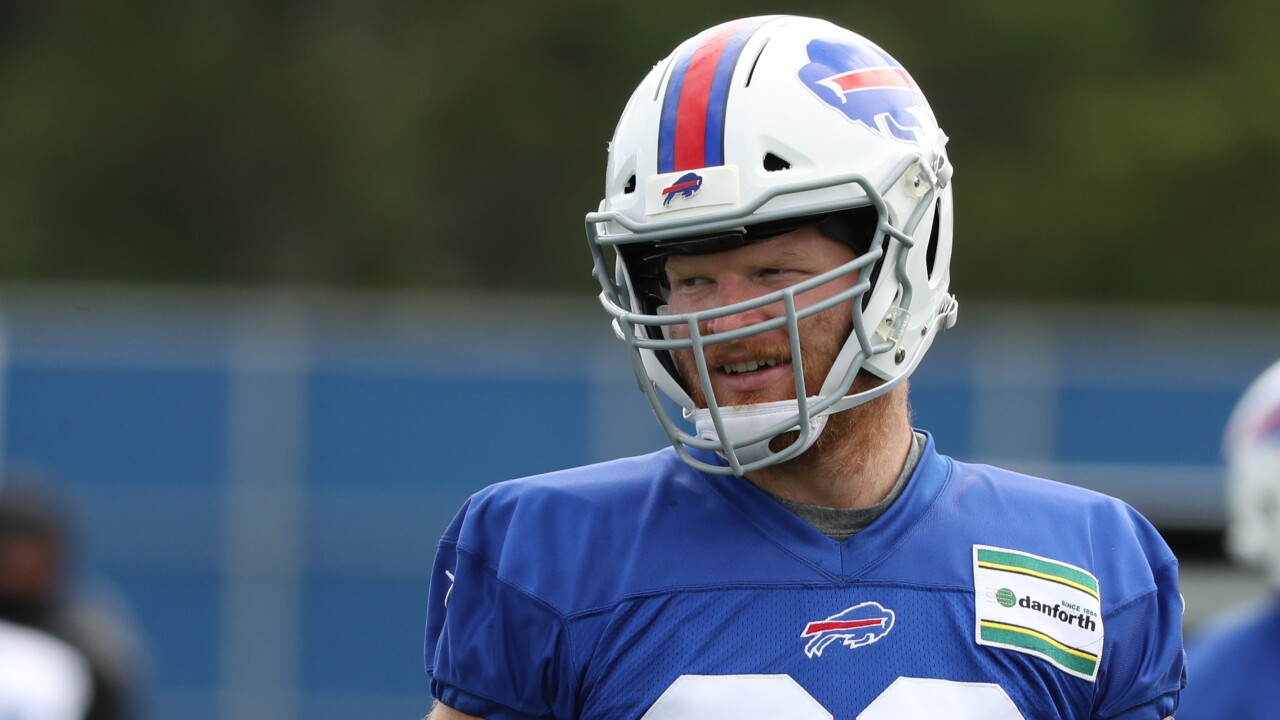 BUFFALO, N.Y. [WKBW] — Thursday was likely the last time the Buffalo Bills will practice before Saturday's cut-down day. By 4:00 p.m. Saturday, GM Brandon Beane and his staff will need to have the Bills roster down to just 53 players. With a Bills roster as deep as it has been in years, this will be no easy task for the front office.

"Friday and Saturday in my opinion are the saddest days in all of sports," Bills quarterback Josh Allen said Thursday. "There are guys that I know can play on other teams that might not have that opportunity, especially this year with all the COVID restrictions and what not. They've got a bunch of tough decisions upstairs but at the end of the day it's a business and we understand that as players we need to put our best foot forward and look forward to next Sunday."

So who do we think will make the cut and who could be on the outside looking in? Here are our thoughts on how the roster could shape out.

Like many of you, I didn't foresee a scenario where fifth-round pick Jake Fromm wouldn't find a way onto the Bills roster. Yet during camp, the rookie failed to impress with his limited reps. There's a chance Davis Webb could be kept as the Bills third quarterback, but McDermott and Beane have shown in the past they're comfortable rolling with just two guys. I'd expect Fromm to be placed onto the Bills practice squad if he isn't claimed by another team.

Singletary and Moss will serve as the Bills one-two punch all season. When we spoke with Beane a few weeks back, he said they'll roll with Singletary as their starter, but I'd expect both will get plenty of work this season.

Jones, who returned to practice as a limited participant Thursday, provides the Bills with a difference-maker on special teams. Yeldon provides depth behind both Singletary and Moss if the Bills are bit by the injury bug. He may not be the flashiest player, but he's a reliable option in the passing game and can still play when called upon.

Once Reggie Gilliam switched his number and started working with the tight ends, it became apparent that this is still DiMarco's job, at least to me. Although DiMarco has missed practice for more than a week with neck soreness, I'm expecting him to be the guy lining up behind Allen Week 1 if he's healthy. Or maybe he'll be running a go route down the sideline in overtime.

Few players, if any, have had a more impressive camp than rookie wideout Gabriel Davis, who continues to make plays. While some fans don't see the benefit of bringing back Andre Roberts, the Bills believe he can change a game if he pops off a big return. Although he wasn't able to do that in his first year with the Bills, the added emphasis on special teams contributors leads me to believe he'll be even better than he was last year, when he was sent to the Pro Bowl.

While Hodgins hasn't been as impressive as Davis, the fellow rookie has made some nice catches and gives the Bills a player who can be a serious mismatch based on his size. While there's a very real chance the Bills keep just six receivers, I believe McKenzie's skill set is something the team isn't willing to part ways with. While he may not be a contributor every week, McKenzie has the speed and versatility to help the Bills in plenty of different situations.

For those Duke Williams truthers out there, he could always end up back on the practice squad where he began last season. He didn't do anything wrong or have a bad camp, this is just the deepest wide receiver room we've seen in years. The same can be said for Robert Foster, the darling of the 2018 season.

Dawson Knox understands that targets are going to be at a premium this year with so many different weapons on the Bills offense, and he's okay with that.
“It’s about being unselfish and knowing whatever is best for the team that week will be called and I’m not going to have a problem with that if we’re winning, obviously.”

Bills fans won't have a problem with that either. While Knox will likely get the majority of the work, I'd expect the Bills to also keep Tyler Kroft and Lee Smith heading into the season.

Brian Winters was brought in to fill the hole at right guard until Jon Feliciano can return. If Feliciano doesn't look like he's going to miss significant time, Winters could be released and the Bills could save some money. With other players who have more position flexibility than Winters, he may be the odd man out. If he does make the team, which is a very real possibility and probably the more likely outcome than what's explained above, the Bills will have plenty of experienced depth.

From a talent standpoint, Trent Murphy is a good enough player to make this team and would help the Bills. But there are plenty of other factors that will go into this decision.

After a mediocre start to last season, Murphy closed out the year with a stretch of productive games. Murphy finished the regular season with four sacks in five games and added two more sacks in the playoffs. But based on the additions the Bills made in free agency and the draft, parting ways with Murphy makes sense financially. If the Bills cut Murphy, they save more than $7 million that can be rolled into the 2021 cap. If the Bills want to keep Matt Milano and Tre'Davious White long term, this may help them get there.

Andre Smith seems to be the wild card here. Although the Bills only gave up a conditional draft pick in 2023 to acquire him, the fact that they gave up anything leads me to believe he'll make the team. While his primary role will be as a special teams contributor, he can fill in for one of the linebackers in a pinch.

Dodson gets the edge over Vosean Joseph, largely in part because of availability. During his first year with the Bills, Joseph missed the entire season after having shoulder surgery. Chances are, the Bills will try and keep him on the practice squad if he's cut and isn't claimed by another team.

Cam Lewis, the former UB Bull, has received plenty of praise this training camp, but in this scenario, he finds himself on the outside looking in. For the sake of the Bills, they'd love to keep Lewis on the practice squad for another season. None of the players kept are necessarily a surprise.

Predicting this position group may have been the easiest of the bunch. Poyer and Hyde are an exceptional tandem, Neal can play the big nickel spot on defense, Marlowe can do a bit of everything, and Johnson has turned into an important player on special teams.

The Bills made this decision for us last week when they released Stephen Hauschka and Lachlan Edwards.