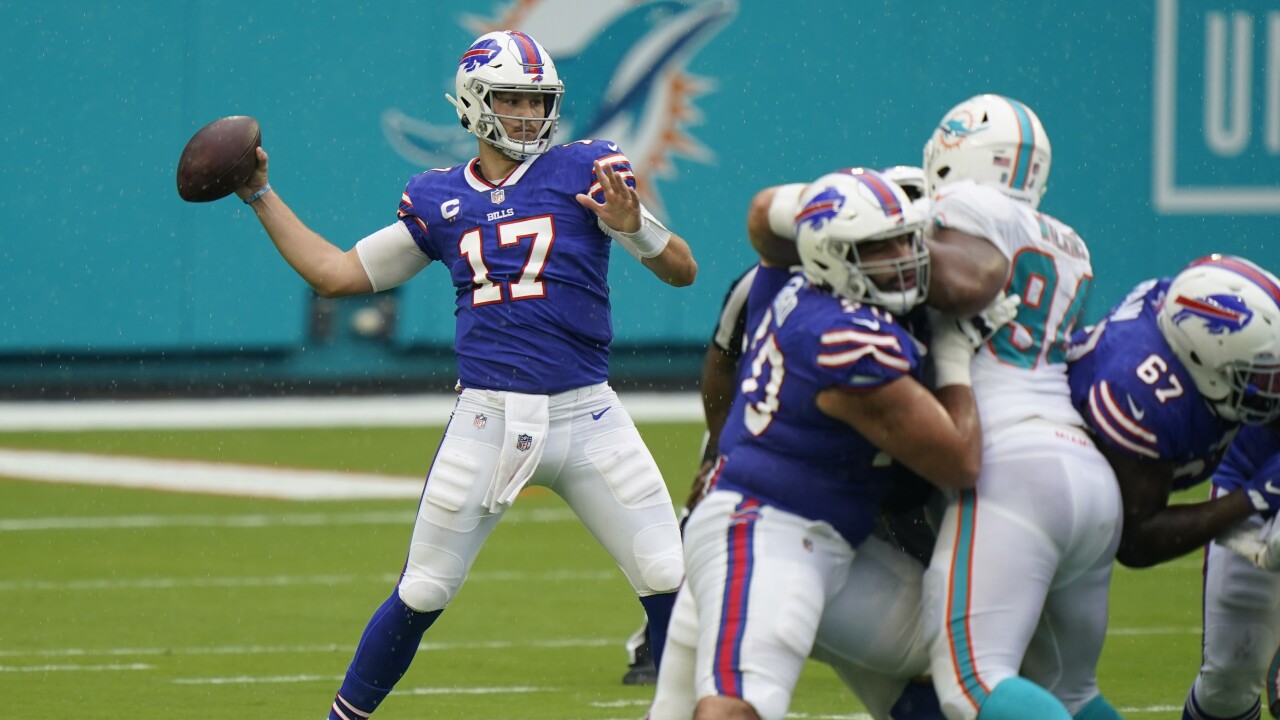 BUFFALO, N.Y. [WKBW] — Josh Allen did something on Sunday a Buffalo Bills quarterback hasn't done since 2002. His 417 passing yards are the most from a quarterback in Buffalo since Drew Bledsoe also threw for 417 yards against the Oakland Raiders in his first year with the Bills.

For Allen, it was his best game as a professional quarterback. In addition to his ridiculous passing numbers, he had four touchdowns and didn't turn the ball over as he led the Bills to their second win of the season.

"We had a good day today," Allen said of the win. "The offense had to pick it up. We got a little sluggish there in the third quarter. I had a couple of throws I wish I could have back but at the end of the day, we got a victory and that's all that matters."

Allen took his game to another level in the final quarter. After a terrible third quarter from the Bills offense following the lightning delay, Allen threw several strikes of his own to lift the Bills to the win.

"There's going to be games when the offense needs to step up and today was one of those days," Allen said after the win. "

"He's got ice water in his veins," Sean McDermott said of Allen's role in the Bills comeback. "There is no moment that is too big for him. That was true from the very start when we got him here."

Once the Bills got the ball back after Miami scored to take a 20-17 lead, Allen was 6-for-8 for 145 yards and two touchdowns.

"There was no panic," Allen said. "It was just, let's go get six. We need to put points up for our defense now."

"He does a great job leading by example and just [has that winning mindset," McDermott added. "He's a highly competitive guy, as are a lot of guys in our locker room, so we've got a bunch of guys like that, and that's a good thing for us."

With injuries to starting linebackers Matt Milano and Tremaine Edmunds, the Bills allowed 28 points to a Dolphins team led by Ryan Fitzpatrick. In 2019, the Bills defense only allowed 28 points once, in a Week 7 loss to the Eagles. So while the defense struggled for the first time in a long time, the offense was there to pick up the slack. Usually, it's been the other way around.

“The offense, man, they just stepped it up,” Bills safety Micah Hyde said. “That’s where our offense is at now. They were able to make plays and move the football. Whether it was Josh, whether it was the receivers, the running backs, the offensive line, they did a hell of a job. I love what they’re doing on offense, they had our back today, they really did. We don’t like giving up 28 points. That’s not winning football on our side of the ball but the offense picked us up and we’re thankful for them.”

To put into perspective just how impressive Allen's first two games have been, he's only one of four quarterbacks to throw for more than 700 passing yards, six or more touchdowns, and no interceptions in the first two weeks of a season [Pro Football Reference]. The others? Peyton Manning [2013], Tom Brady [2015], and Patrick Mahomes [2019].

We'll pump the breaks on any comparisons to those guys, but it would be impossible to criticize Allen's game in Miami. Surely some will try, but they'd be wrong.