Josh Allen: The only stat I care about is the points on the scoreboard 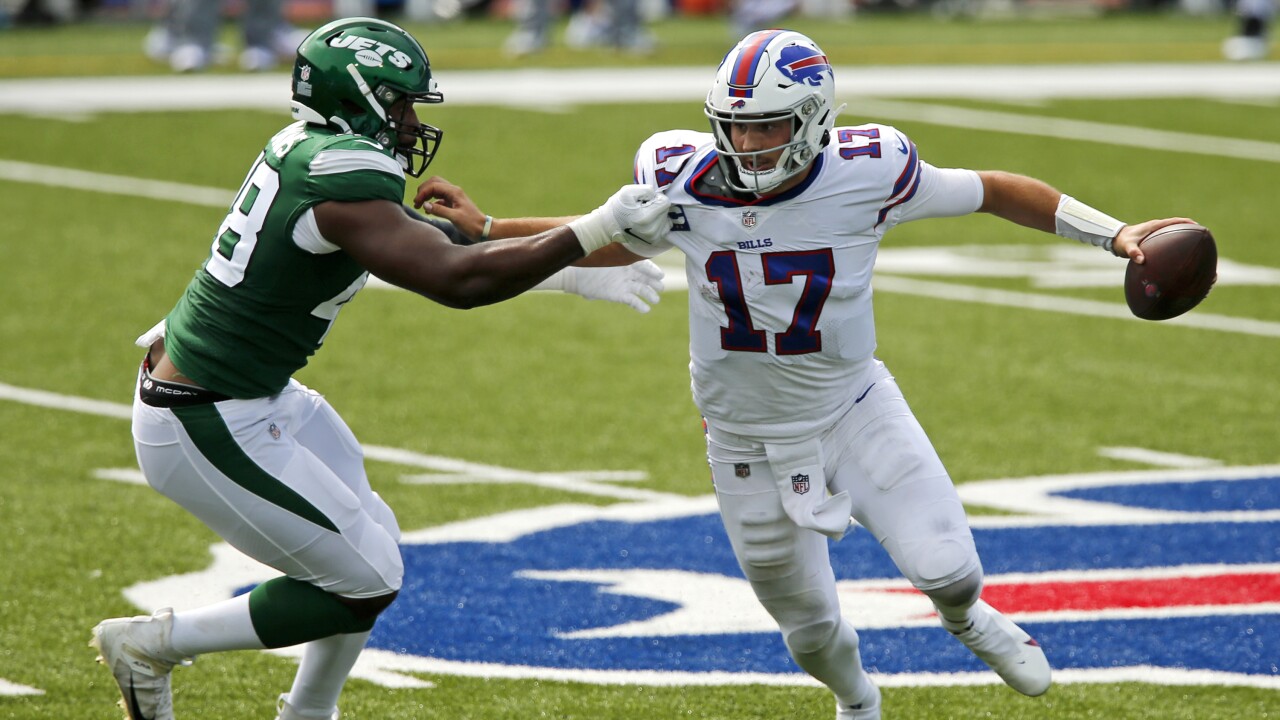 ORCHARD PARK, N.Y. [WKBW] — We're only one week into the season and we've already experienced a healthy dose of the Josh Allen experience during the Bills 27-17 win over the New York Jets. There was plenty of good, there was some bad, and there was a milestone surpassed that always seemed to fire up fans on social media.

Let's start with the good. For the first time in his career, Allen passed for more than 300 yards. Allen went 33-of-46 for 312 yards and two passing touchdowns. He added 57 yards and a touchdown on 12 rushing attempts. For some perspective, Allen's previous high was 266 passing yards in a loss to the Browns last season. 46 passing attempts are also the most Allen has attempted in a regular-season game.

If you like Josh Allen, he was awesome today. If you think he stinks, you thought he was terrible.

I think he was solid today. He needs to hold onto the ball & he missed a few throws. But he also made some nice plays. That’s what he does. But the good outweighed the bad, IMO.

“The way we won it, yes, I’m happy but at the same time we’ve got a lot to work on and a lot to grow from,” Allen said after the win. “I expected things to hit the fan at some point during the game in Week 1 with no preseason and luckily it didn’t hurt us too badly but we’ve got to be better, we left a lot out there and we know that.”

During his first two seasons, much has been made about Allen's inability to surpass the 300-yard marker. To some analysts and fans it's an important milestone. To the Bills third-year quarterback, it's just another stat. At least that's what he said after the game.

"It's one of those stats that doesn't matter. The only stat I care about is the points on the scoreboard," said Allen. "As long as we have more than the other team is all I'm really focused about."

Allen's big day impressed his new superstar wideout. In his debut with the Bills, Stefon Diggs led his team with eight receptions for 86 yards. After the game, he said the offense left some meat on the bone and needs to clean a few things up. But he was impressed with his new quarterback's debut.

Stefon Diggs on playing with Josh Allen: you want to go hard for this guy because he's damn sure going to go hard for you #BillsMafia @WKBW pic.twitter.com/oroQH757Lp

Allen becomes the first Bills quarterback since 2016 to surpass 300 passing yards. Tyrod Taylor was the last quarterback to do it when he threw for 329 against the Dolphins on Christmas Eve.

Ultimately Allen did enough to lead his team to a win against the Jets on Sunday. But you have to wonder if his early mistakes could've cost the Bills against a more formidable opponent.

“Those two fumbles early on I can’t do," Allen added. "I can’t put ourselves in a position where we have points and then take those points away from us."

Of course, there was one bad overthrow to John Brown who was open in the back of the end zone. The clip of the throw was shared hundreds of times on social media by those who don't think Allen is an above-average NFL quarterback. Perhaps this year he'll be able to prove he is. And while Sunday wasn't a perfect game for the Bills signal-caller, it was a very nice start.