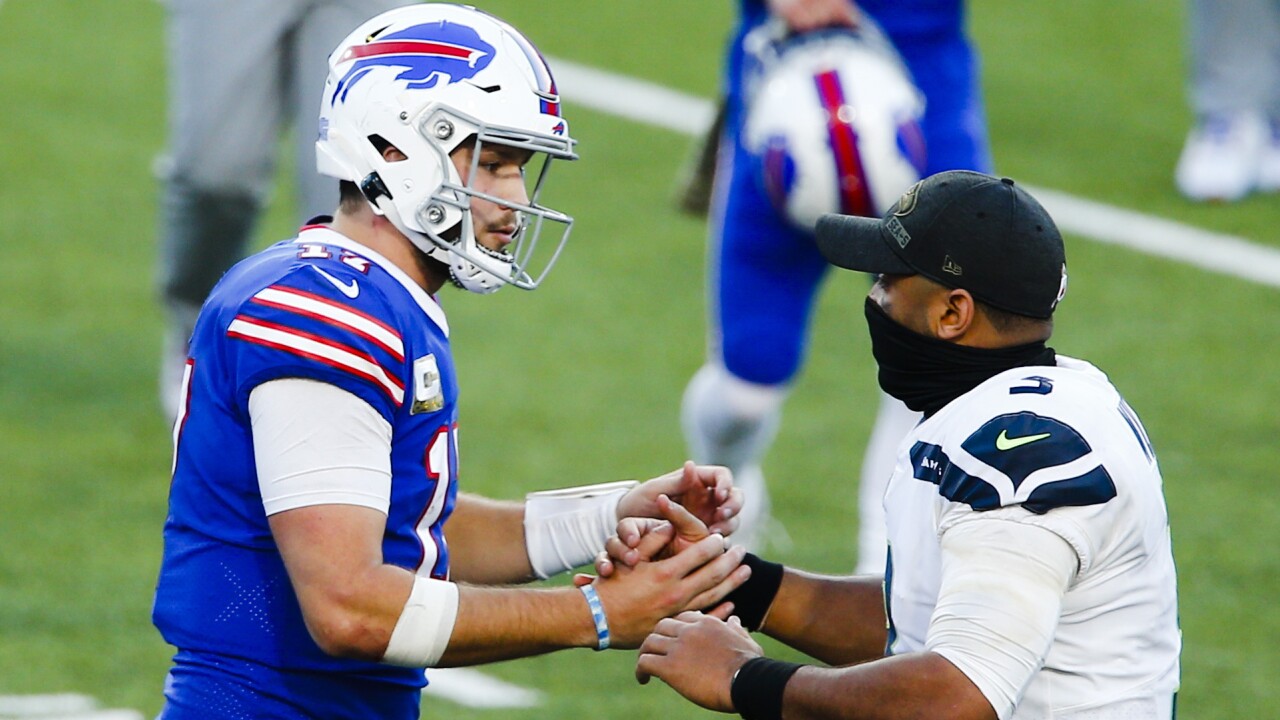 ORCHARD PARK, N.Y. [WKBW] — Josh Allen and the Buffalo Bills made a statement with their 44-34 win on Sunday against the Seattle Seahawks. After the game, players and coaches explained it was just another win. But it wasn’t — it was a message to the other teams in the NFL that the Bills can compete with anybody.

how many points did the #Bills score today? pic.twitter.com/ieSFo2cJ7q

“As a whole team we took care of business today,” Allen said after the game. “We played complementary football, our special teams gave us a short field a couple of times and so did our defense.”

Allen finished the day 31-of-38 for 415 passing yards and three passing touchdowns. He added 14 yards on the ground and a rushing touchdown in the win.

“I think the last few weeks we’ve been moving the heck out of the ball, we just haven’t been putting many points on the board,” Allen said. “It was good today that we got some touchdowns instead of field goals but we still left a lot of meat on the bone though.”

"These guys didn't even try to run the football today,” Seahawks head coach Pete Carroll said. “We didn't expect that to happen. We didn't think they would totally abandon the running game. We had a real nice plan there for how they were going to run it.”

The Bills wisely took advantage of the Seahawks struggling secondary on Sunday. How’s that for some alliteration? The Seahawks are allowing an average of 362 passing yards per game and Allen became the latest quarterback to torch them.

“If we’re moving the ball and spreading the ball around, we’ve got weapons outside that I’m not sure too many people can keep up with. So I need to make good decisions and put the ball in their hands and let them make plays.”

Yet despite Allen’s big day, he was quick to point out how he needs to get the ball out quicker. On Sunday, Allen was sacked by the Seahawks seven times. It was perhaps the only area where the Bills offense struggled.

Allen’s game is even more impressive when you consider he was playing with a heavy heart. On Saturday, Allen lost his grandmother, Patrica, yet decided that he wanted to play the game.

“We talked yesterday before meetings last night. I asked him where he was on it and I obviously expressed to him my sympathy,” Bills head coach Sean McDermott said after the game. “He said he wanted to play and we just felt like he was going to have to compartmentalize for the better part of 24 hours to get through the game. And that's what he did. He was emotional after the game, you know. [It’s] not an easy thing to play through.”

Allen didn’t comment on his grandmother’s passing, but in a video posted by the Bills official account, he told teammates “there’s no place I’d rather be, I love you guys,” as he broke the team down after the win.