Gore paving the way for Singletary in Bills' backfield 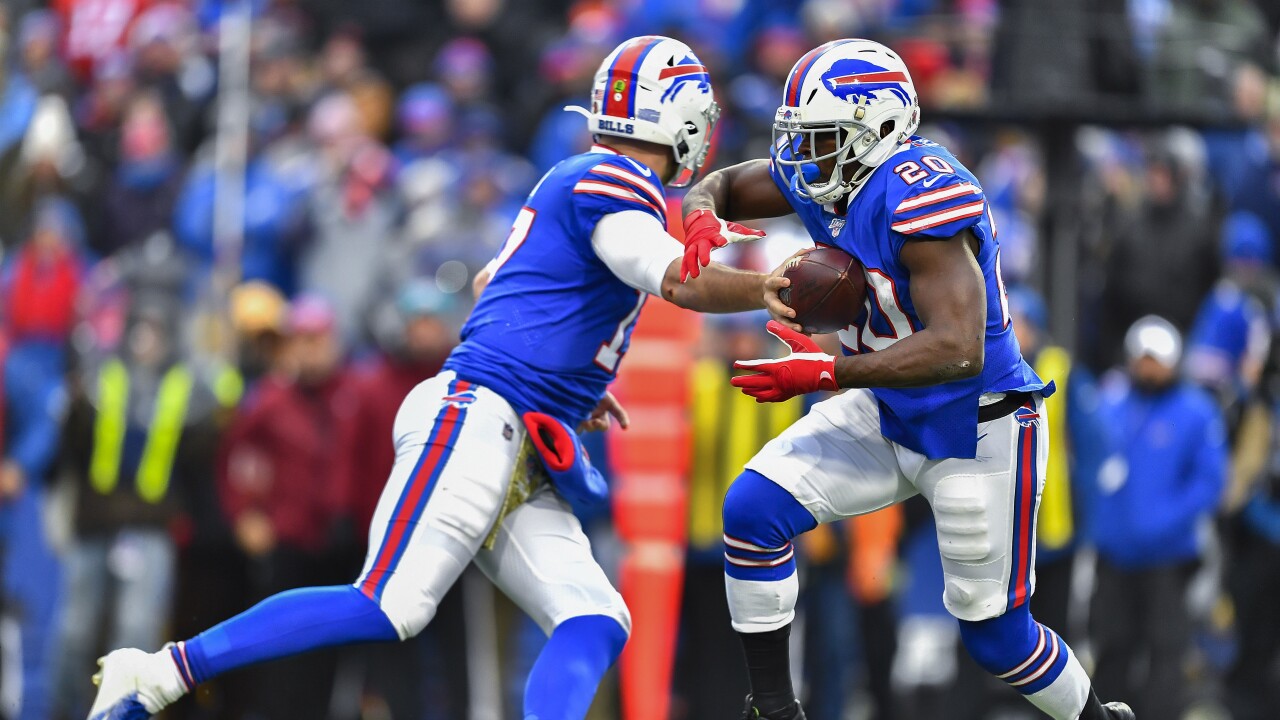 ORCHARD PARK, N.Y. (WKBW) — As rookie running back Devin Singletary praised his teammate Frank Gore, the 15-year veteran stood up and told reporters to focus on Singletary, who had rushed for more than 100 yards for the first time.

Of course, Gore knew that wasn't going to happen. While it's certainly quite the accomplishment for Singletary to rush for 106 yards, Gore just an hour earlier, became the NFL's third-leading career rusher, as he surpassed the 15,269-yard mark set by Barry Sanders.

"First 100 man," Gore said while Singletary answered questions. "I love that kid. He's very humble. He kind of reminds me of myself. He doesn't say much and he just plays ball."

Devin Singletary & Frank Gore explain what it's like sharing a backfield and why they're so close #Bills @WKBW pic.twitter.com/Vfsq9mO5Yb

"It's an honor," Singletary said about sharing a backfield with Gore. "I get to work with one of the best every day, week in and week out, day in and day out, and I get to soak up the game from him."

Gore, who passed Sanders on a 6-yard run in the fourth quarter, was emotional after the game. He said he had tried to not think about the milestone but was told he was within a few yards after he broke off a 27-yard gain at the end of the third quarter.

"For me, it’s tough to get here. It’s not an easy road to get there on the field and I’ve been doubted my whole career, not just in NFL, college but when I tore my two ACLs, a lot of people said that I wouldn’t be here for two to three years but by year fifteen, I’m still having fun, still making plays, still helping a team win games. I’m blessed."

The 36-year-old running back spent the majority of his NFL career in San Francisco, spending 10 years with the 49ers from 2005 until 2014. Gore then made stops in Indianapolis and in Miami before signing a one-year deal with Buffalo in the offseason.

"The fans are great," Gore added. "You see that Buffalo cheer, man, I love it, “let’s go Buffalo.” I’m happy I got a chance to do it at home, in front of the fans and that was big today."

After the game, head coach Sean McDermott gave Gore the game ball following the win. In a video posted by the team, McDermott said it's an honor to watch Gore work every day.

"Those names that are up those are legendary names and Frank is now right with those guys. And not that he wasn't before, but to be number three is an incredible, incredible testament to his character, to his work ethic, to his just mental toughness and proving people wrong."

Sunday was Gore's day in the spotlight. But it's becoming more evident with every passing game that this will be Singletary's backfield for a long time. And Gore couldn't be happier.

"He’s like a little brother, man," Gore said of his 22-year-old counterpart. "Ever since he got drafted I’ve had him in my hip pocket. He listens to everything I say. He’s a great kid, great natural. He has a chance to be big in this league. He has no other choice but to keep working. I’m going to stay on the phone with him every day, even when I’m done."

With his 106 yards on Sunday, Singletary now has 490 yards on 84 carries this season. The rookie is averaging 5.8 yards per carry and has three total touchdowns on the season.

"It was big. We were going hard this week and it paid off," Singletary said. "Before the game, I told him let's go get your 46 [yards] and he told me let's go get your first 100-yard game and we were able to do that today."

So as Thanksgiving approaches, be thankful Singletary has a chance to learn from someone like Gore. It's hard to imagine a more perfect role model for the Bills running back of the future.

As we were talking to Devin Singletary he was asked a lot of questions about playing with Frank Gore. When Gore heard the questions he stood up and said “ask him about his first 100-yard game, that’s a big accomplishment” #Bills @WKBW