Bové: It wasn't pretty but the Bills found a way to win and improve to 3-0 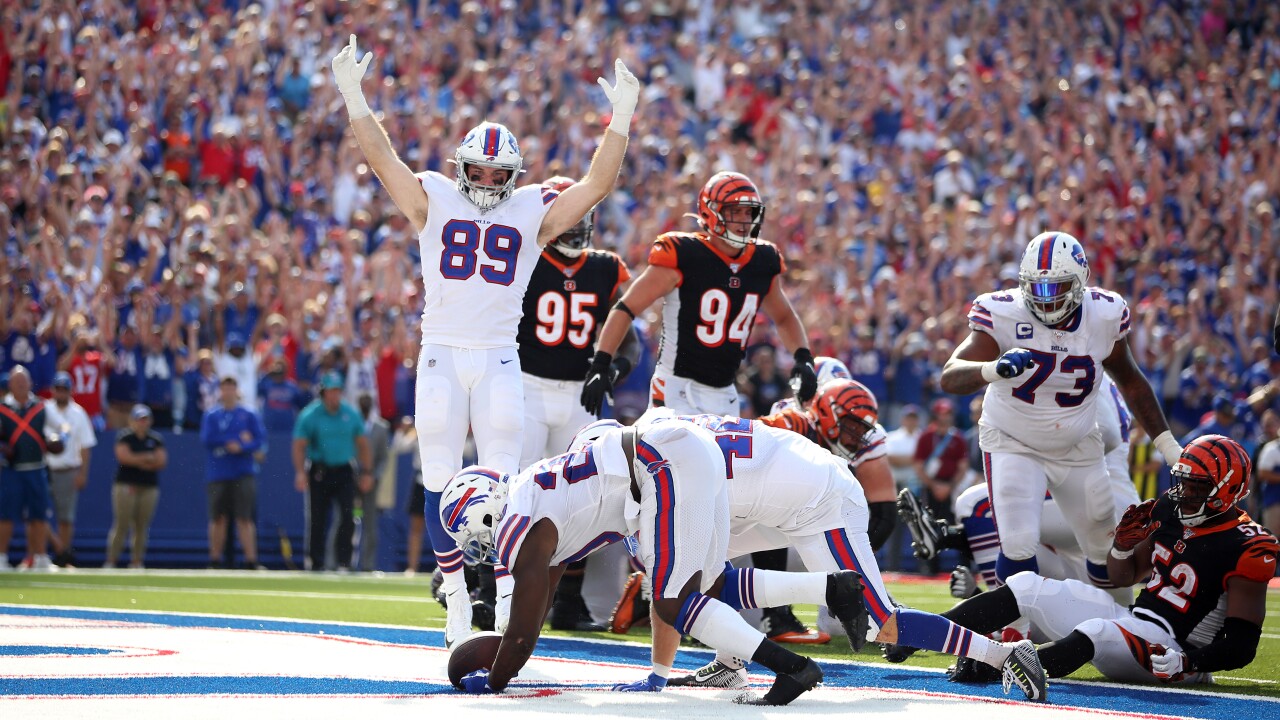 ORCHARD PARK, N.Y. (WKBW) — If you thought the Bills were going to squander away a 14-point lead to the Bengals and drop their first game of the season you weren't alone. At 1:00 p.m. New Era Field was ready to burst. A few hours later you could hear a pin drop as the Bengals scored 17 unanswered points to take the lead late.

But that's when Josh Allen and the offense woke up. It was like the GIF of the Undertaker rising from the dead.

In the fourth quarter with 4:48 left on the clock, the Bills began their march. After connecting with Cole Beasley for a seven-yard gain, Allen found rookie tight end Dawson Knox for the biggest offensive play of the game. Knox slid past the defenders and busted off a 49-yard gain after he ran over everybody and anybody in his way.

Dawson Knox. You love to see it. #CINvsBUF | #GoBills pic.twitter.com/ovMqiUTmZN

The play brought the Bills into field goal range but more importantly put them within striking distance of the lead. Four plays later the Bills regained the lead as Frank Gore plowed his way into the endzone, giving the Bills a 21-17 lead.

"He's one of those guys if you give him the ball he is going to do whatever he can to get yards," Allen said of Gore after the game.

"I'm really proud of the guys the way they battled," Bills head coach Sean McDermott said after the game. "The momentum was not in our favor, and give the Bengals credit. They battled and that's a better football team than people give them credit for."

Buffalo still needed a stop on defense and Tre'Davious White was the man to deliver. After marching the ball down to the Bills' 28-yard-line the Bengals were faced with a 3rd and 5. Cincinnati QB Andy Dalton took the snap and tried to find WR Auden Tate, but the pass was deflected by Micah Hyde and intercepted by White. It was White's second interception of the game. The play sealed the win and a 3-0 start for the Bills.

So how did the Bills get it done?

They made their biggest plays when the game mattered the most. It's a pretty simple formula that on Sunday worked in the Bills favor. Quite frankly, the home team probably should've lost this game after failing to finish the Bengals in the first half. But their most efficient drive and biggest stop came in the final minutes of the game. They seem to have a flair for the dramatic.

Josh Allen connected with Knox, he scrambled and evaded pressure at the right times, and offensive coordinator Brian Daboll called up efficient plays. It was the perfect combination for a successful game-winning drive. On defense, the unit bent, but they didn't break. Despite allowing the Bengals to move down the field the Bills best defensive player made the play to lift the team to victory. As a matter of fact, after the play when White walked off the field he yelled: "Tell Dion [Sanders] to call me!" Because when you ball, you should get the call.

Frank Gore celebrates with his son Messiah after the win! pic.twitter.com/dCBfjZVod2

Surely this formula won't win every week, especially against better teams. If the Bills think next week they'll be able to fall asleep for two quarters and still beat the New England Patriots than they're in for a rude awakening. But every time the most important trait a team can have is finding a way to win games. And in three weeks to start the season the Bills have found a way each and every game. Eventually, the magic will wear off. But the wins won't and that's what's most important.