Bové: For the Bills, a lot has changed in two years 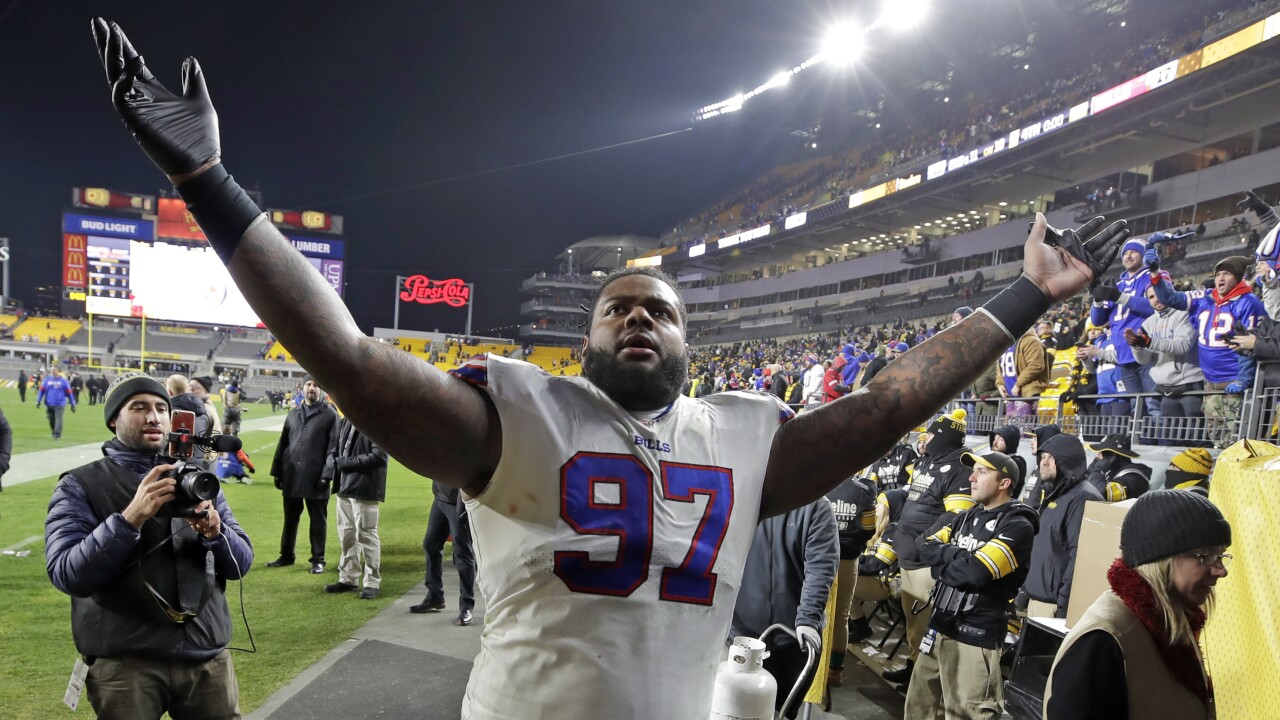 PITTSBURGH (WKBW) — When the Bills clinched a playoff spot in 2017 it was chaos. In the locker room, players and coaches jumped for joy as the 17-year drought finally came to an end.

On Sunday night in Pittsburgh, it was business as usual as the Bills clinched their second trip to the playoffs in the last three years.

The standard has changed and this team feels like they are just getting started.

Sean McDermott has taken his team to the playoffs two of the three seasons he's been the #Bills head coach -- we caught up with him after their playoff clinching win in Pittsburgh @WKBW pic.twitter.com/so66hKh9au

"This Steelers win, we can just go ahead and throw that in the back," defensive tackle Jordan Phillips said. "We've got bigger fish to fry now."

"Now with the talent, the character and the leadership we have on this team it's more of an expectation of winning games versus just seeing if we can get in," Bills captain Lorenzo Alexander added.

"There is a lot of hard work that's gone into it from everyone," head coach Sean McDermott said. "We're about changing a mindset and I've talked a lot about that this year. We expect to win and that's not just the players, it's everyone in our building and our fans. Again, we have a lot of work to do but we're going to stay after it and continue to grow and learn."

When asked if this win gave the front office any validation, GM Brandon Beane made it clear there is still plenty of work to be done.

"We're a work in progress and we've by no means arrived. We're thrilled we made the playoffs, that's obviously the first goal is to get into the tournament. But we've got two games left, a big division game against a team we haven't beat since Sean and I have been here that we would love to do it and it will be very tough at their place."

Josh Allen, who had an up and down first half, once again led his team to another fourth-quarter comeback, connecting with Tyler Kroft on a 14-yard touchdown to put the Bills ahead.

"You know, the goal isn't just to get into the playoffs," Allen said after the win. "There is a lot of work to be done and there are a lot of things we need to learn from this tape and we will. And we'll go out and apply it on the football field and try to become the best team we can possibly become."

On defense, the Bills forced five turnovers, including four interceptions. Tre'Davious White stole the show with two picks, including one he almost took back for a score. It was another impressive game for the third-year corner who is proving he's one of the best defensive backs in the NFL.

"It's for the team, I can't take all the credit for it. We have great guys around me. We've got a great group up front that gets pressure on the QB. It makes my job so much easier."

With their win against Pittsburgh, the Bills will more than likely finish the regular season as the No. 5 seed and play the No. 4 seed during wild card weekend. Their opponent will more than likely be the winner of the AFC South. After the Sunday games during week 15, Houston has a one-game lead over Tennessee in the division.

And while there are still two games to be played and a lot that can happen, one thing is certain -- the Bills will have a golden opportunity to win their first playoff game since 1995. Anything less would be a disappointment.