Bové: Eagles run early and often as Bills fall to 5-2 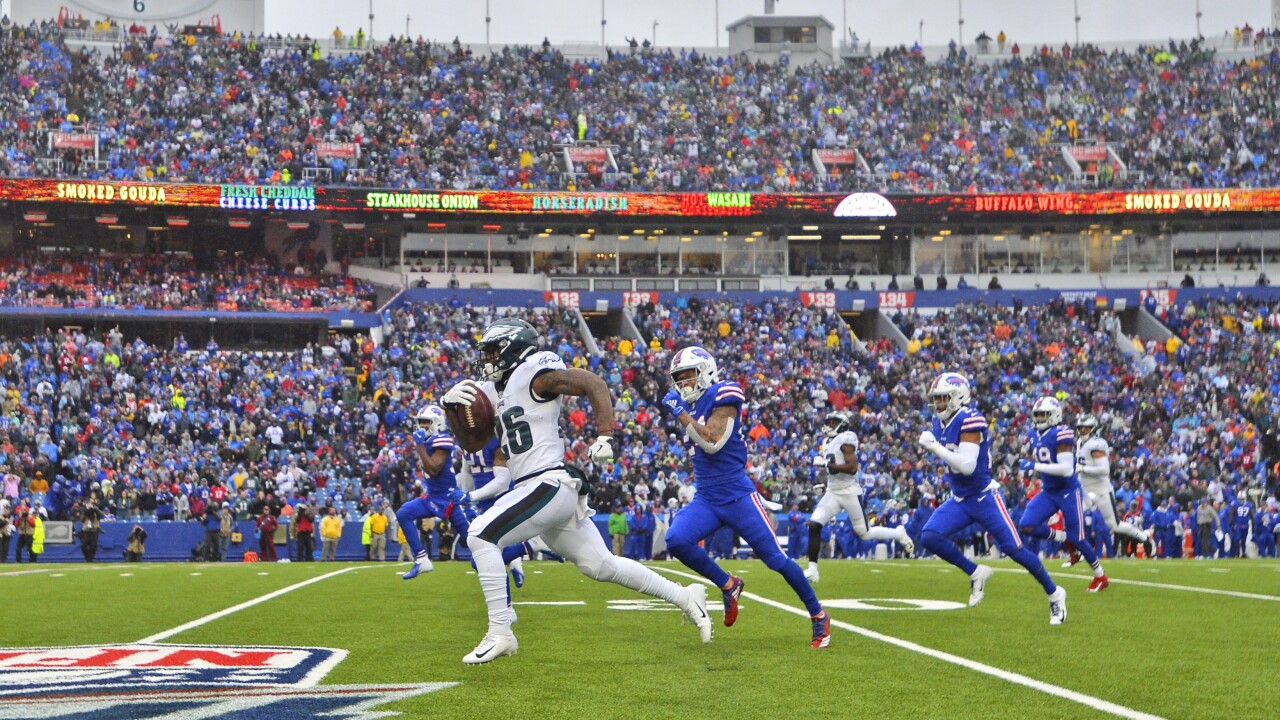 Adrian Kraus/AP
Philadelphia Eagles' Miles Sanders, left, runs for a touchdown during the second half of an NFL football game against the Buffalo Bills, Sunday, Oct. 27, 2019, in Orchard Park, N.Y. (AP Photo/Adrian Kraus)

ORCHARD PARK, N.Y. (WKBW) — As the wind whipped through New Era Field on Sunday afternoon the Philadelphia Eagles decided to attack on the ground. The Buffalo Bills had no response.

What's wrong with the #Bills run defense? I asked Sean McDermott after the game and if he was concerned it's becoming a trend @WKBW pic.twitter.com/1QGXDSg9v7

"The conditions kind of warranted more of a running game," Pederson said. "Our offensive line is very prideful group and they want to run, they'd run the ball the whole game if they could, but they just did a great job of front."

Last week, despite slowing down in the second half, the Miami Dolphins also had plenty of success running the ball, especially up the middle.

"It starts up front and we weren’t good enough," defensive end Trent Murphy said after the loss to the Eagles. "So the D line will take ownership of that and we’ll take the credit for today and we will be better and show up to work tomorrow and make the corrections."

As for the Bills rushing attack, that was nowhere to be found. Josh Allen led the Bills with 45 yards on the ground while Frank Gore and Devin Singletary combined for 53 yards on 12 carries.

The passing game wasn't much of a threat either. Allen finished 16-of-34 with 169 yards and two touchdowns.

"I have to find a way to allow ourselves to get better with moving the ball and then putting some more points on the board, and a performance like this won’t cut it," Allen said after the game.

Allen, who fumbled the ball three times on Sunday [one recovered by Eagles], made his most critical mistake at the end of the first-half as he coughed up the ball on a designed run on 3rd and 1. The Eagles went on to score their first touchdown of the game five plays later. After the fumble from Allen, the Eagles outscored the Bills 28-6.

"That's a play that coach puts in my hands and I have to be better with taking care of the football. It’s just one of those, they got a hat on it and they made a play when they need to do and it's one that shouldn't happen, that's one that's in my control that I can't let happen."

Despite the loss, the Bills didn't seem to think there was any reason to panic after their second loss of the season.

"It's not the end of the season, we still have plenty of games left," safety Micah Hyde said after the game. "Nobody was freaking out after the game, nobody was panicking, we'll watch the film tomorrow, get it corrected and move forward."

"It's just about us being truthful with each other and learning from this," Tremaine Edmunds added. "I've got great confidence in the guys in the room and I'm excited about what's to come."

Some perspective on this loss from Micah Hyde and John Brown #Bills @WKBW pic.twitter.com/23IsDY3Gm6