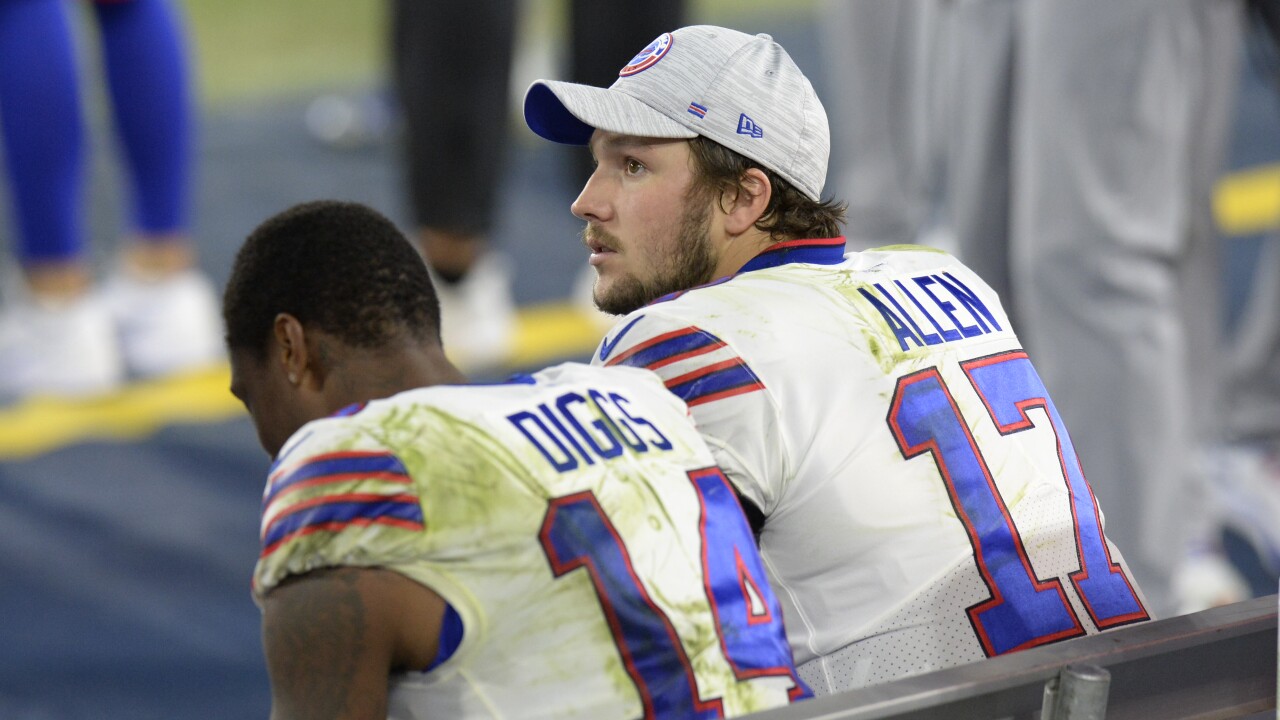 Mark Zaleski/AP
Buffalo Bills quarterback Josh Allen (17) and wide receiver Stefon Diggs (14) sit on the bench in the second half of an NFL football game against the Tennessee Titans Tuesday, Oct. 13, 2020, in Nashville, Tenn. The Titans won 422-16. (AP Photo/Mark Zaleski)

That was the message from Bills players after their blowout 42-16 loss to the Tennessee Titans on Tuesday night. Just two minutes into the game, the Bills saw themselves trailing after the Titans turned a Josh Allen interception into a touchdown a few plays later. It was the first time the Bills had to play from behind in the first half of a game this season.

"We've got to be better and that starts with me," Allen said after the game. "We'll learn from this one, we're not going to make it a bigger deal than what it needs to be, we've got a short week ahead of us and we need to learn from this one and kind of forget about it as quick as we can."

One of the biggest issues Tuesday was a lack of discipline on both sides of the ball. The Bills had three turnovers, while the Titans didn't have any. The Bills also had 10 penalties, often putting themselves into difficult situations, especially on defense.

"It was an uncharacteristic game for us, uncharacteristically poor fundamentals, poor pre-snap discipline, turning the ball over," head coach Sean McDermott said. "There's only one opponent and the opponent's on the other sideline. You can't beat yourself and again, give them credit. They were ready to go and at the same time, we beat ourselves."

Defensively, the Bills allowed the fourth-most points in the Sean McDermott era. At times, they were put into terrible situations caused by turnovers on offense, but more often than not, they were getting picked apart by Ryan Tannehill in the middle of the field.

"There are a few plays we wish we could have back, once the bleeding started, we couldn't stop it," safety Micah Hyde said. "We're not going to go undefeated, that's the one outcome of this, [it's] a good thing it's a short week so we can flush it and move onto the next one."

Players on the other side of the ball were quick to try and take some of the blame. The 16 points scored by the offense was their fewest in a game so far this season.

"We all have stuff to learn from this one," center Mitch Morse added. "It's one of those things where it's not panic, but there is definitely a sense of urgency to get this stuff fixed and go from there."

"It is what it is. We're not going to let this one loss define us," Allen added. "We understand you can't win them all so this is a game we got beat in all three phases - offense, defense, and special teams and we understand that. We've got to be better, we've got to be prepared, and we've got to come out swinging early."

When asked if a loss like Tuesday's could have a long term impact, Micah Hyde said it needs to.

Micah Hyde was asked what kind of impact a loss like this can have for a team moving forward [@Marcel_LJ's question] #BillsMafia @WKBW pic.twitter.com/kEDy2w9GO1

Whether or not the Bills can do that remains to be seen. They'll have to if they want to turn things around against the defending Super Bowl champions in Week 6.