Another week, another fourth-quarter comeback led by Josh Allen 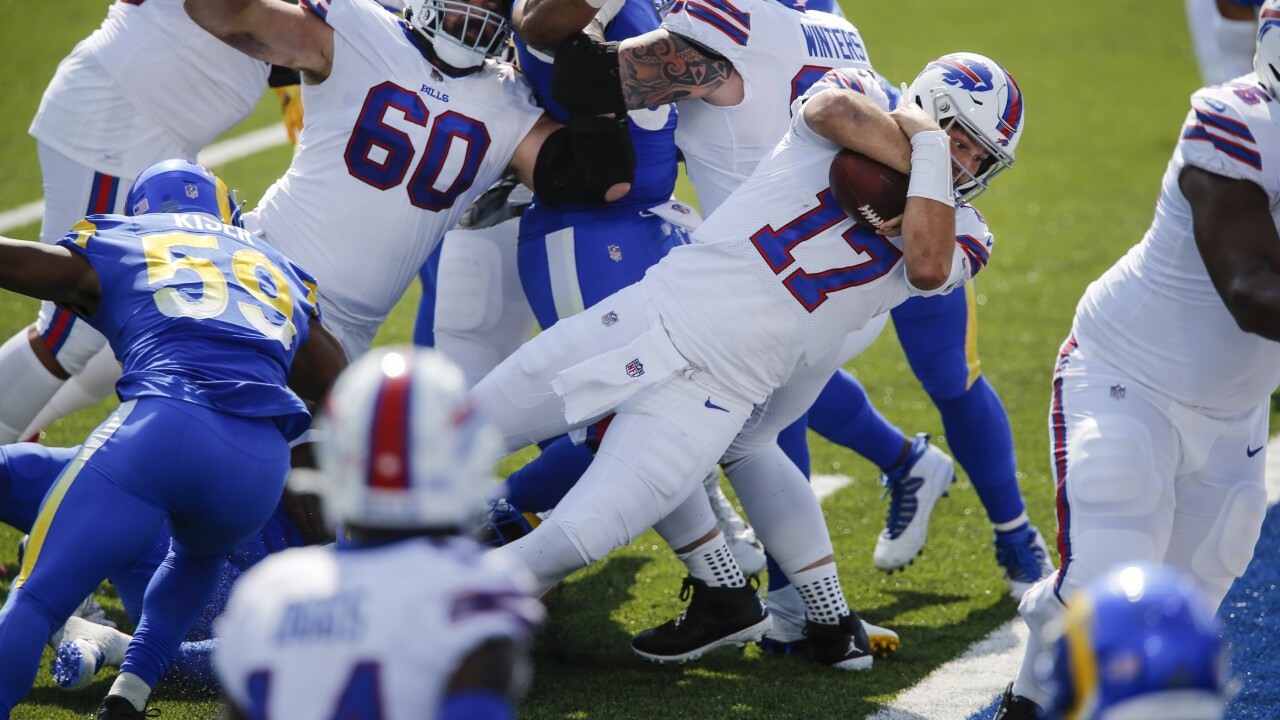 John Munson/AP
Buffalo Bills quarterback Josh Allen (17) dives into the end zone for a touchdown during the first half of an NFL football game against the Los Angeles Rams Sunday, Aug. 26, 2018, in Orchard Park, N.Y. (AP Photo/John Munson)

ORCHARD PARK, N.Y. [WKBW] — What more can even be said? For the second time in as many weeks, Josh Allen led his team to a fourth-quarter comeback as the Bills improved to 3-0 to start the season.

JOSH ALLEN GIVES THE BILLS THE LEAD WITH 15 SECONDS LEFT! 🚨

“I just want it, more than anything,” Allen said when asked about his mindset late in games.

Allen now has eight fourth-quarter comebacks in his NFL career. Sunday’s game probably shouldn’t have required a comeback for the Bills but they squandered a 25-point lead in the third quarter and watched the Rams score 29 unanswered.

“At the end of the day, to come back in the NFL and win games, it's tough to do and he's now done it twice in the last two weeks,” head coach Sean McDermott said. “So it just goes back to the belief to stay calm at critical moments in the game and have that winning mindset in those critical moments.”

For Allen, the defining play on Sunday was his conversion to Cole Beasley on 3rd and 22 on the final drive. The Bills looked dead in the water but Allen pulled out some “back yard football bull” and the two connected to keep the Bills slim chances alive.

"The guy wants to win,” Beasley said after the win. “He's got a lot of fire in him and that spreads throughout the team. We feel that. Anytime you’ve got a guy like that you’re going to run through for a wall for him. He’s a dog and you love that out of a quarterback. There aren’t many quarterbacks like that. A lot of them shy away from the physicality of the game and he does not. He’s just a baller and a grinder. So we’ll put everything on the line for him, I’ll put my body on the line for him because I know he'll do the same."

“Josh has a hell of a game,” safety Jordan Poyer said. “He was just full of confidence out there.” “I think he was poised. Extremely poised,” center Mitch Morse added. “That second half, things didn’t seem to be working out for us but the guy kept his composure and made some serious plays getting us out of some tough stuff and there’s a lot we can work on but we’re going to take this win and it was just an exciting football game.”

Allen’s game wasn’t perfect. He threw his first interception of the year, although it was certainly on a questionable call. He also had a fumble on a play when Aaron Donald blew up the Bills offensive line, forcing the ball loose as he took Allen to the ground.

“As a team, we need to be better,” Allen added. “We need to put our foot on the pedal and put that game away.”

He’s right, yet it’s hard to criticize Allen’s day after the Bills came out on top. At this rate, he’s an early MVP candidate and even when the team falls behind, Bills fans know there’s always a chance when Allen is under center.

Question: What enables you to pull out a game like this in the fourth quarter?

This is what you want to hear from the face of your franchise pic.twitter.com/tkBcxvfA7X