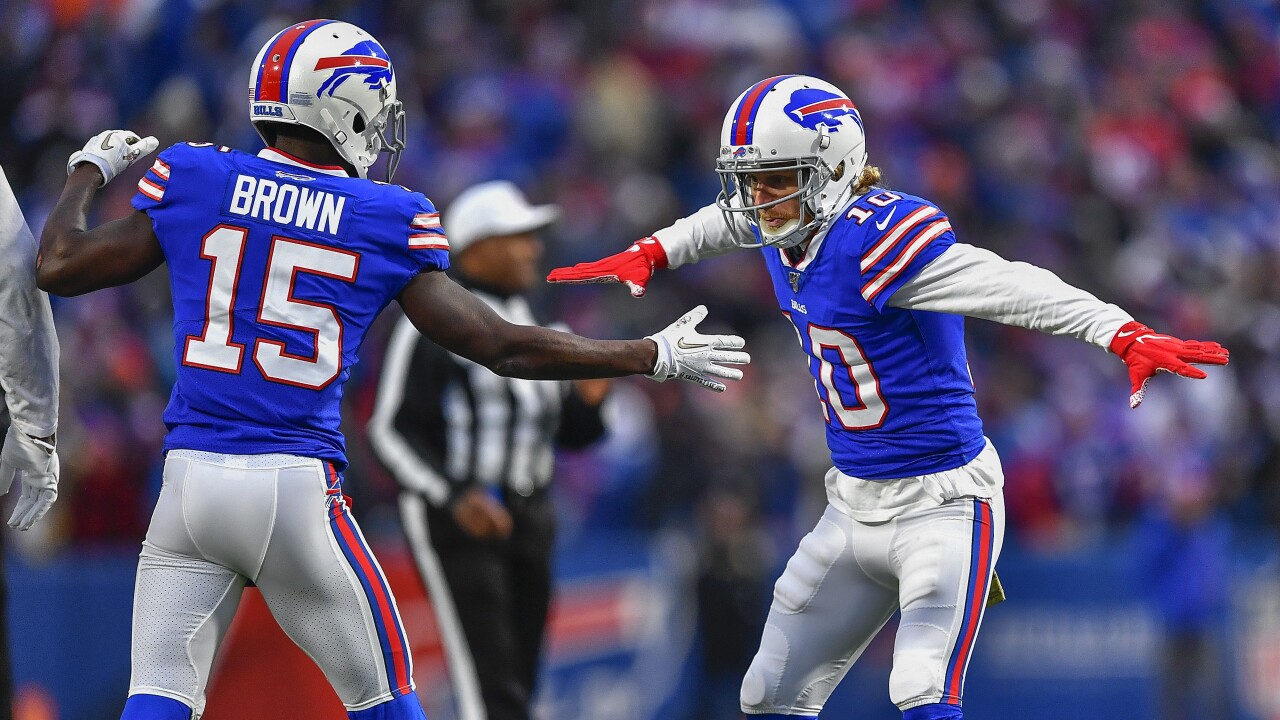 ORCHARD PARK, N.Y. (WKBW) — Regardless of what happens in the playoffs, 2019 will go down as the best Buffalo Bills team of the decade. Sad, I know.

With their second trip to the postseason in the last three seasons on the horizon, the Bills front office has built a team trending in the right direction. So as we shift our focus to wild card weekend, let's hand out some awards for the best [and worst] players in 2019.

I'm not sure the John Brown addition could've gone much better for the Bills. After pursuing the 29-year-old receiver last year, Brown signed a three-year, $27M contract in March. In his first season with the Bills, Brown led the team with 72 receptions, 1060 yards, and six touchdowns. Brown is the Bills' first wideout to surpass 1,000 yards since 2015 [Sammy Watkins, 1047].

What has been most impressive about Brown is his instant chemistry with second-year QB Josh Allen. When the pocket started to collapse, Allen often looked for Brown, who had 115 targets in 15 games. With two years left on a team-friendly deal, the bond between Brown and Allen should continue to blossom next season, especially if the Bills add a few more weapons on offense.

John Brown will finish the regular season with 72 receptions, 1060 yards and 6 TD.

Cole Beasley will finish with 67 receptions, 778 yards and 6 TD.

bUt ThIs Is HoW Bad TEAms StAY bAD

It's hard to praise Brown without giving some love to Cole Beasley. Like Brown, Beasley had an exceptional first year with the Bills, finishing the regular season with 67 receptions for 778 yards and six touchdowns. As teams started to put more of an emphasis on stopping Brown, Beasley provided the Bills with a mismatch in the middle of the field. With three-years left on his contract, Beasley should be the go-to guy up the middle for years to come.

In the Bills home opener against the Bengals, safety Micah Hyde noticed cornerback Kevin Johnson was lined up in the wrong spot. Before the ball was snapped, Hyde ran over to Johnson and pointed for him to move to the other side of the field. A few seconds later, Johnson recorded an easy sack and it was further proof of the importance of Micah Hyde to the defense.

While his stat line doesn't jump off the page, Hyde is the glue that holds the Bills' defense intact. He makes adjustments on the fly, plays a responsible game and makes everyone on the defense better.

It's easy to overlook the impact Matt Milano makes on defense until he's not able to play. In the one game the Bills played without Milano [Week 7 vs. MIA], the defense looked out of sync and a step slow. While Bills fans fully appreciate how talented the third-year linebacker is, he is still far from a household name around the league.

With only one year left on his rookie contract, Milano is going to get a hefty raise and he deserves it. Keeping both Milano and MLB Tremaine Edmunds together for the next several years should be a priority for the front office.

The Bills have their running back of the future. Devin Singletary spent the first few weeks of the season sharing the workload with veteran Frank Gore but has solidified the starting job since. The 2019 third-round pick finished the regular season with 775 yards on 151 carries [5.1 yards per carry]. Along with two rushing touchdowns, Singletary added two receiving touchdowns and 29 receptions. Barring a major surprise, Singletary will likely be the Bills feature back next season and he's earned the promotion.

Devin Singletary & Frank Gore explain what it's like sharing a backfield and why they're so close #Bills @WKBW pic.twitter.com/Vfsq9mO5Yb

On defense, it took Ed Oliver a few weeks to get going but he has been dominant since the Bills Week 11 trip to Miami. With every passing week, his role on the defense increases and he's becoming a problem for opposing offensive lineman. Arguably his best game came on the big stage, registering two sacks in the Thanksgiving win over the Cowboys. Along with rookie tight end Dawson Knox, both Singletary, and Oliver should have fans excited about the potential of the 2019 draft class.

Rookie with the most still to prove: Cody Ford

Cody Ford left a lot to be desired during his first season in Buffalo. More often than not, Ford was the weakest link on an offensive line that did a pretty good job protecting Josh Allen. Working in a rotation with veteran Ty Nsekhe, Ford took over the job after Nsekhe was injured during Week 11's game against the Dolphins.

In his first game back, Nsekhe was once again injured in the third quarter and was carted off the field with an ankle injury. If Ford is forced to start in the playoffs, that could be a big mismatch for opponents.

Ford's early struggles don't mean he won't turn into a solid starter down the line -- but it also means the Bills should consider drafting another right tackle or addressing the position in free agency. Perhaps Ford is better suited at guard.

You could argue Shaq Lawson has been the Bills' most effective pass rusher this season. Jordan Phillips leads the team with 9.5 sacks but Lawson's consistent pursuit and explosion off the line have been a pleasant surprise in 2019.

After an injury-plagued start to his career, Lawson was declined his fifth-year option by the Bills and has made an impression since. At the beginning of the season, the 25-year-old defensive end said he would use that as motivation and it has worked. With 6.5 sacks, 32 total tackles and a forced fumble Lawson is having his best season as a pro. Deciding what to do with Lawson and Phillips is going to be something to monitor in the offseason. With plenty of cap space, the Bills can look to bring both players back. But they might prefer to use their money elsewhere and keep plenty of cap space.

When Trent Murphy signed a three-year, $22.5M contract last year he was expected to bring the Bills someone who could consistently pressure the opposing QB. After missing three games last season, Murphy said at the beginning of this year he was starting to feel like himself again. But the production hasn't consistently been there.

Murphy finished the 2019 regular season with five sacks, two of which came in a meaningless win against the Jets in Week 17. While Murphy has shown flashes, more often than not he's been the forgotten name on the Bills defensive line. With a cap hit of nearly $9M next season, don't be surprised if the Bills part ways with Murphy before his final year of his contract. If he's brought back for another year, he'll need to be far more productive to be worth his contract.

This one way pretty easy. In his third season with the Bills, Tre'Davious White has cemented himself as one of the best defensive backs in the NFL. Some experts have even thrown White's name into the conversation for defensive player of the year. And while I think he should be considered, I'd be shocked if a CB from the Bills took home the award.

White finished the regular season with six interceptions, tying him with Patriots CB Stephon Gilmore and Vikings CB Anthony Harris for the most interceptions in the NFL. White added 17 passes defended, 48 solo tackles and two forced fumbles on the season. Signing White to an extension should be of the utmost importance in the offseason as the market for cornerbacks continues to rise. He's one of the best players at his position and the biggest reason why the Bills had one of the best defensive units in the league. He's also a great goalie.