Joe B: Buffalo Bills All-22 Review - Week 7 vs. Indianapolis Colts 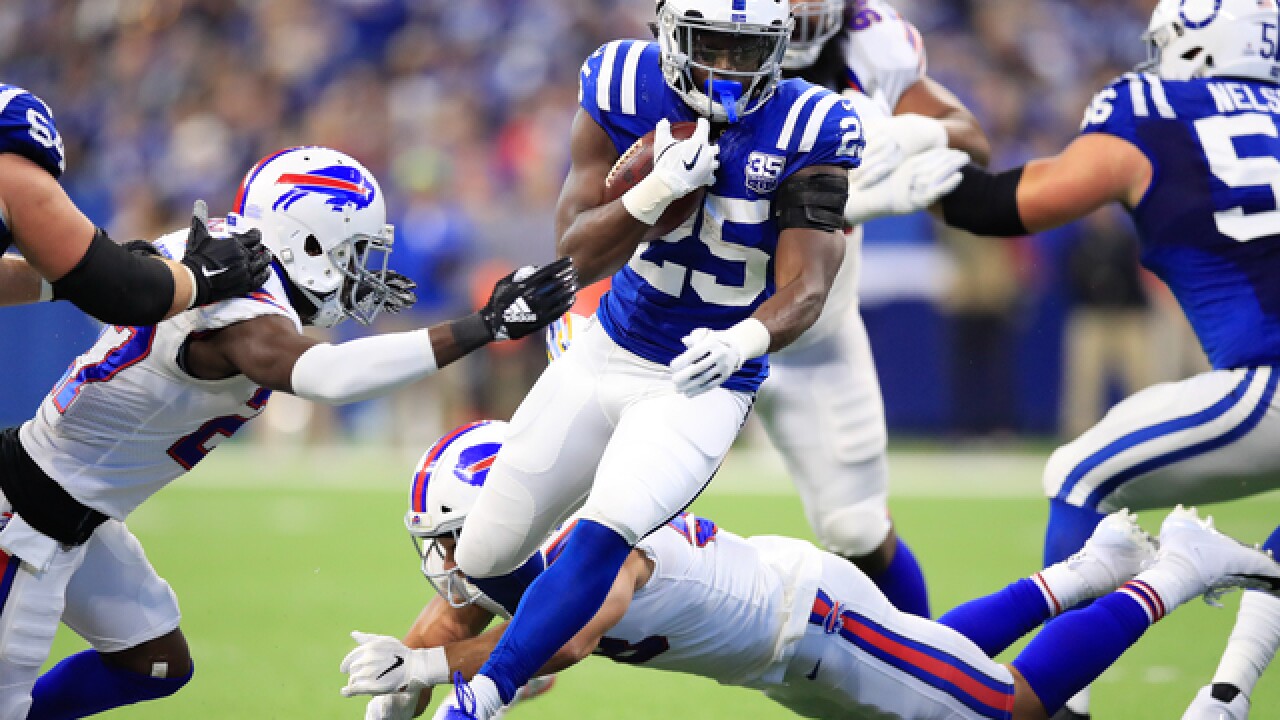 Copyright 2018 Scripps Media, Inc. All rights reserved. This material may not be published, broadcast, rewritten, or redistributed.
Andy Lyons
<p>INDIANAPOLIS, IN - OCTOBER 21: Marlon Mack #25 of the Indianapolis Colts runs the ball against the Buffalo Bills at Lucas Oil Stadium on October 21, 2018 in Indianapolis, Indiana. (Photo by Andy Lyons/Getty Images)</p>

In Week Six, the Buffalo Bills suffered a late, dramatic loss on the road to the Houston Texans. Just one week later, the Bills lost in a far less dramatic way, getting blown out by the Indianapolis Colts 37-5.

Up next, at long last, the Bills start the first of two home games in a row -- although the challenge is perhaps the toughest of the year on Monday against the New England Patriots. Before that happens, first is an in-depth look at the individual performances from the Week Seven loss to the Colts, which dropped the Bills to a 2-5 record on the 2018 season.

Each week, WKBW.com will review the film, and bring you how each player graded out in the previous week, with the help of the Game Pass app on NFL.com. You can see a full explanation of how the grades get calculated at the bottom of the article.

Before we get to the individual grades, first some takeaways from the game to help fill in some of the gaps between the grades that you'll see:

1) Dominance right through the middle for the Colts
- Among the most worrisome facets to the Bills’ performance against the Colts was, simply put, how poorly the defensive tackles stood up to the Colts rushing attack. Indianapolis has struggled to run the ball all year, but they devised a strategy against the defensive tackles that wound up working. There was a clear attempt to siphon one of the defensive tackles over one way, baiting the player to run with the line that way, while another blocker would set up going against the grain of the rest of the offensive line. That second blocker’s purpose was to serve as an essential wedge block that opened big holes on the ground time and time again. When you had that happening, plus reps where the defensive tackles were just getting pushed back at the point of attack, it led to outright dominance all game long. Kyle Williams, Harrison Phillips, and Jordan Phillips all struggled to make an impact. Star Lotulelei was the best of the bunch, but even on some reps that he won, some of his teammates let him down. And while the defensive tackles certainly let the Bills down, the next duo was a big reason why the Bills were constantly allowing big yardage.

2) Young LBs were too easily covered up
- I don’t believe there was a bigger letdown through the entire roster than from the two young linebackers against the Colts. Without question, weakside linebacker Matt Milano had his worst game of the 2018 season for multiple reasons. Against the run, Milano got caught on the second-level by offensive linemen that he frequently slips through to put a stop to the run. While he still had a few good moments, Milano got covered up far too many times, and it led to huge gains on the ground. In coverage, Milano got caught playing a couple of hunches, and it left receivers wide open elsewhere on the field — the starkest of which being the touchdown reception by Marlon Mack. Even in a down performance, Milano still flashes the ability we’ve seen for much of the season, but the Colts had his number, and it was a big reason why they dominated the game. As for Tremaine Edmunds, he also found himself getting covered up a bit too quickly by blockers. For such a big player, you’d like to see him use his length to get off the block with one arm and to try to provide any resistance possible against the run. Unfortunately, that’s been a bit of a problem for Edmunds for much of the season, getting caught in traffic. In coverage, Andrew Luck froze him over the middle of the field a few times, and it helped his target find the soft spot to come up with a relatively easy pitch and catch. Both these players have seen better days in the 2018 season, so I don’t think fans should be overly concerned. Both possess clear potential and ability but had an off game.

3) Believe it or not, there was something for Josh Allen to learn from
- I know, I know. What can a rookie quarterback really take away from a player that turned the ball over four times? Well, if you isolate the few solid plays of Anderson’s day, there are some morsels of wisdom in the film that Allen can learn from Sunday. To this point in his development, Allen hasn’t shown an overall comfort operating within the confines of the pocket on a consistent basis. We’ve seen flashes here or there, but usually, he’s in a rush to either leave the pocket or get the ball out of his hand. It’s his most significant challenge to this point. However, when looking at the film from the Colts game, Anderson shows real poise on a handful of throws to stay calm and relaxed in the pocket while feeling the rush, before eventually releasing the ball for a completion. If Allen is engaged and watches the film actively with offensive coordinator Brian Daboll, quarterbacks coach David Culley, and Anderson himself, watching the correct way to operate from the pocket on film can certainly help in his implementation of it when he returns to action. The same goes with throwing the ball into tight windows, which is something that Allen hasn't shown complete trust in either himself or his receivers to do consistently enough. With only ten days on the job, Anderson did it multiple times -- and the rewards of completions came to him on several occasions. He also did his part to look off some coverage, which then opened up his targets a couple of times. Although they weren't commonplace or overwhelmingly done, these are all things that if Allen spots and learns from a veteran in that way, that he can try to carry over into his game. It ultimately just depends on how much time all parties put into using the film to teach and help the rookie grow from the sidelines.

4) Russell Bodine was a complete liability
- Through the year, the offensive line hasn't gotten a lot of the credit it deserved -- but all credit should not link to the game against the Colts. Four out of the five starting players along the line had at least a well below-average performance, with one of them garnering one of the worst grades on the team. That member of the line was none other than starting center Russell Bodine, who the Colts routinely pushed into the backfield -- which was also a bit of his reputation in starting the last four seasons with the Bengals. Nose tackle Al Woods dominated him in one-on-one matchups, either pushing him straight into the backfield, or even on one occasion, he just held him in place and then ripped the center to the ground to easily clog the run lane. The Bills have had a tough time finding a center to steady the ship, as both Bodine and former starter Ryan Groy were amongst the lowest graded players on the roster. At this point in the season there isn't much they can do, so it will now need to be a somewhat prominent member of the offseason wishlist.

5) Bills runners had success in spite of the OL
- While the offense didn't show well against the Colts, you have to give credit to running back Chris Ivory for the job that he did against a good Colts front. Ivory didn't have a ton of help from the offensive line, even having to reroute due to poor blocking a pair of times, which wound up being the catalyst to a huge gain. Ivory also did something as simple as pushing the pile forward to pick up two, or three additional yards when there wasn't a clear running lane. The Bills also received positive contributions from Marcus Murphy, who had been inactive each of the previous three weeks. Murphy used his great speed and change of direction ability to get out into the open field to generate good gains for the offense. The Bills missed LeSean McCoy on Sunday in Indianapolis, but it was an encouraging sign -- even almost halfway through the season now -- that the primary backup Ivory got capably handle the full-load of a team that needs its running game to work to have a chance to win.

Without further ado, the individual grades:

How the grades work:

Every Tuesday, when the All-22 film becomes available, we’ll go through and watch each play and every player on each play as many times as necessary, to assess a letter grade for that game to the player. It is a subjective analysis, and it’s important to note that we do not know the play calls and full responsibilities. With that written, the grades stem from technique, outstanding efforts, and presumed liability.

The study accounts only for players that take a snap on offense or defense, and players with under 15 snaps -- unless they have a significant impact on the game -- will not factor into weekly rankings.

Season-long grades have been tallied and documented, with an individual game’s grade weighted for how much the player was on the field in a given week. Those will be available starting in Week Two.