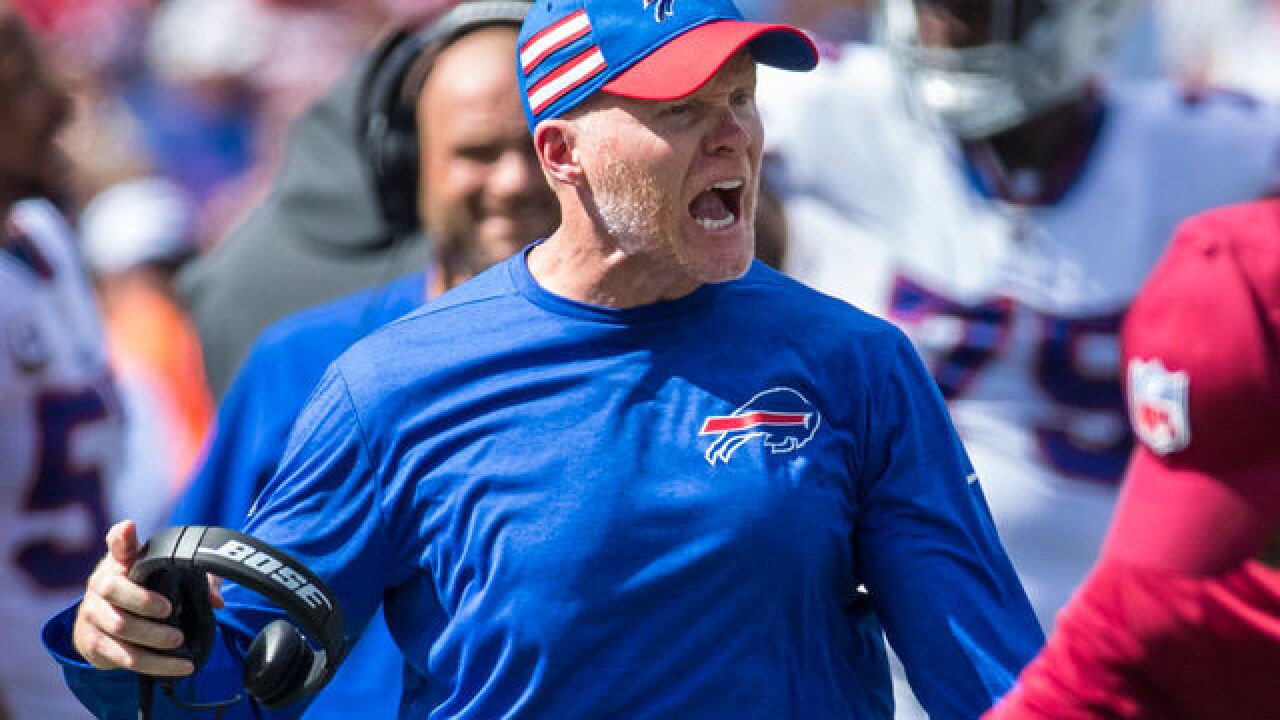 Copyright 2018 Scripps Media, Inc. All rights reserved. This material may not be published, broadcast, rewritten, or redistributed.
Brett Carlsen
<p>ORCHARD PARK, NY - SEPTEMBER 16: Head coach Sean McDermott of the Buffalo Bills yells in reaction to a failed challenge during the second quarter against the Los Angeles Chargers at New Era Field on September 16, 2018 in Orchard Park, New York. (Photo by Brett Carlsen/Getty Images)</p>

Following as weak a showing as you'll find in Week One, the Buffalo Bills returned home with a new starting quarterback, all while hoping for different results. While the start of the Los Angeles Chargers game was eerily similar to Week One, the Bills started to get things together in the second half, before losing 31-20

Up next, the Bills will take on the Minnesota Vikings in a road game where they are heavy underdogs. Before that happens, first is an in-depth look at the individual performances from the Week Two loss to the Chargers, which dropped the Bills to 0-2 on the season.

Each week, WKBW.com will review the film, and bring you how each player graded out in the previous week, with the help of the Game Pass app on NFL.com. You can see a full explanation of how the grades get calculated at the bottom of the article.

Before we get to the individual grades, first some takeaways from the game to help fill in some of the gaps between the grades that you'll see:

1) Allen's footwork, accuracy held the Bills' offense back
- You'll notice something when you look at the grades below. They aren't that bad, and not indicative of a team that was getting blown out by 25 points before the second quarter had even completed. What we ended up seeing were mostly average-to-above average individual efforts, while a pair of key positions were what ultimately held the Bills back from getting back into the game in the second half. Unfortunately for the Bills -- and perhaps it was to be expected in his first game -- one of those players was Josh Allen. The rookie quarterback got off to a slow start and the Bills were swimming upstream from that point forward, but Allen wasn't doing them any favors, either. In the first half, Allen was showing indecisiveness, he wasn't seeing the entire field and missed some wide open targets, and the footwork that the Bills had been trying to fix became an issue once more -- particularly with him opening up his left hip when throwing to the left sideline. In the second half, Allen settled in a bit more. He completed some passes with anticipation, and he continued to give his receivers chances to make a play. However, while doing so, he made two awful throws that the Chargers intercepted -- the second of which crushing any hopes the Bills had of potentially mounting a comeback. Still, there are good things to work with for Allen, and it wasn't a complete misstep. He showed off his strong arm and the ability to run -- and the Bills even showcased the latter for a bit. However, he must rein in the footwork issues and wild throws, because those throws lead to game-changing plays for the defense. All in all, there are plenty of things to work from with his debut.

2) Chargers manipulated Edmunds
- In addition to Allen, the number one reason the Chargers game got away from the Bills so quickly was due to the play of rookie middle linebacker Tremaine Edmunds. That might come across as harsh, but the Chargers targeted him in the short passing game the entire second quarter, and that's right when they built their insurmountable lead. Quarterback Philip Rivers was toying with Edmunds as the middle linebacker still hasn't found his sea legs in coverage just yet. Rivers would give a quick glance to one side, get Edmunds to either move with him or freeze in his current spot, to which the quarterback either hit an underneath target over the middle perfectly in stride or put it over Edmunds' head with a zone-beating throw. Edmunds won't see that level of mind manipulation in the quarterbacks they see every week, but Rivers is next-level from a mental perspective, and he was toying with Edmunds. The Chargers game is a definite teaching moment for Edmunds, who is still trying to get to the point where he isn't in his head and just reacting instinctively and confidently. He isn't there just yet. Fortunately for him, he has a couple of great chances to show improvement in the next two weeks against the solid Kirk Cousins and the future Hall of Fame quarterback Aaron Rodgers.

3) The player that surprised the heck out of me
- I teased this out on Twitter, but one player's performance completely shocked me, considering my initial read on his game against the Chargers on Sunday night. That player is none other than right guard John Miller (some of you were right, congratulations!). It just goes to show how vital going back and watching the game from as many different angles as you can, so that way you get an accurate picture as to how players performed. Immediately after the game, I thought Miller had another continuation of Week One, where he looked just a tick slow and was part of the reason for the offensive woes. That was only the case on a pair of snaps. The rest of the game, Miller looked confident and was controlling his one-on-one's on almost a play-to-play basis.  I even thought it might be time to see what rookie Wyatt Teller brought to the table, but after seeing the way Miller played in Week Two, I don't think the Bills should do that any longer. Along with Miller, Vladimir Ducasse had another strong showing (and debuts at number five in the season-long grades this week), Dion Dawkins played well against a tough matchup in Melvin Ingram, and even right tackle Jordan Mills had a solid day. Of the five, the biggest weakness was center Ryan Groy -- and that may be the reason that head coach Sean McDermott was hesitant to commit to the same starting offensive line for Week Three. It wasn't as bad of a performance as Week One for Groy, but with a veteran in Russell Bodine right there on the bench, the Bills could feel inclined to make the switch. In all, my apologies to Miller. I was wrong. He had a great game.

4) Phillips needs more time on the field
- Along the defensive line, overall they had a much better performance than they did in Baltimore -- and that includes defensive tackle Star Lotulelei. However, the third-round pick and defensive tackle Harrison Phillips has continued to flash big ability whenever he's on the field. They've lined him up both at one-technique and three-technique, and he continues to make plays regardless of the role. He made Chargers left guard Dan Feeney to look silly on a few plays during the game. However, the problem is that Phillips' playing level warrants a much higher percentage of snaps than what he has received over the first two weeks. Garbage time in Week One helped inflate his season-long numbers, but against the Chargers, the Bills used him on only 33-percent of snaps. The more dubious stat when it comes to the share of snaps at that position is the fact that the 34-year-old Kyle Williams had to play 75-percent. That is way too high for him, especially at this point in his career. Considering that it was almost only a three-person rotation (Robert Thomas received only six snaps), it makes Phillips' snap count that much more baffling. The easy way to adjust this is to bring Williams down to around 55-to-60 percent. If the Bills gave Phillips nine of Williams' snaps from Week Two, that would have brought Williams down to 56-percent, it would have bumped up Phillips to around 49-percent, and Lotulelei remained at his 67-percent. It just makes the most sense, considering how the rookie has played the first two weeks.

5) Chargers completely avoided Tre'Davious White
- Did you think Tre'Davious White was quiet against the Chargers? You were right. His name didn't come up on the broadcast much, if at all, and that was design by Los Angeles. The Chargers did not test the second-year cornerback, as he locked down Keenan Allen when lined up in man coverage. Allen did all of his work against zone coverage and when White wasn't lined up over him. It is now the second straight week where the opposing team has almost avoided White completely, which is a sign of respect for what he did as a rookie in 2017. Besides, why push it against an outstanding player when there are weaknesses to be had over the middle and at the other cornerback position? Teams avoiding White might wind up being a trend, though the Bills should continue to shadow him against the top echelon receivers that they go up against in games. I won't be surprised at all if White is assigned to shadow the shifty Stefon Diggs in Minnesota on Sunday.

Without further ado, the individual grades:

How the grades work:

Every Tuesday, when the All-22 film becomes available, we’ll go through and watch each play and every player on each play as many times as necessary, to assess a letter grade for that game to the player. It is a subjective analysis, and it’s important to note that we do not know the play calls and full responsibilities. With that written, the grades stem from technique, outstanding efforts, and presumed liability.

The study accounts only for players that take a snap on offense or defense, and players with under 15 snaps -- unless they have a significant impact on the game -- will not factor into weekly rankings.

Season-long grades have been tallied and documented, with an individual game’s grade weighted for how much the player was on the field in a given week. Those will be available starting in Week Two.