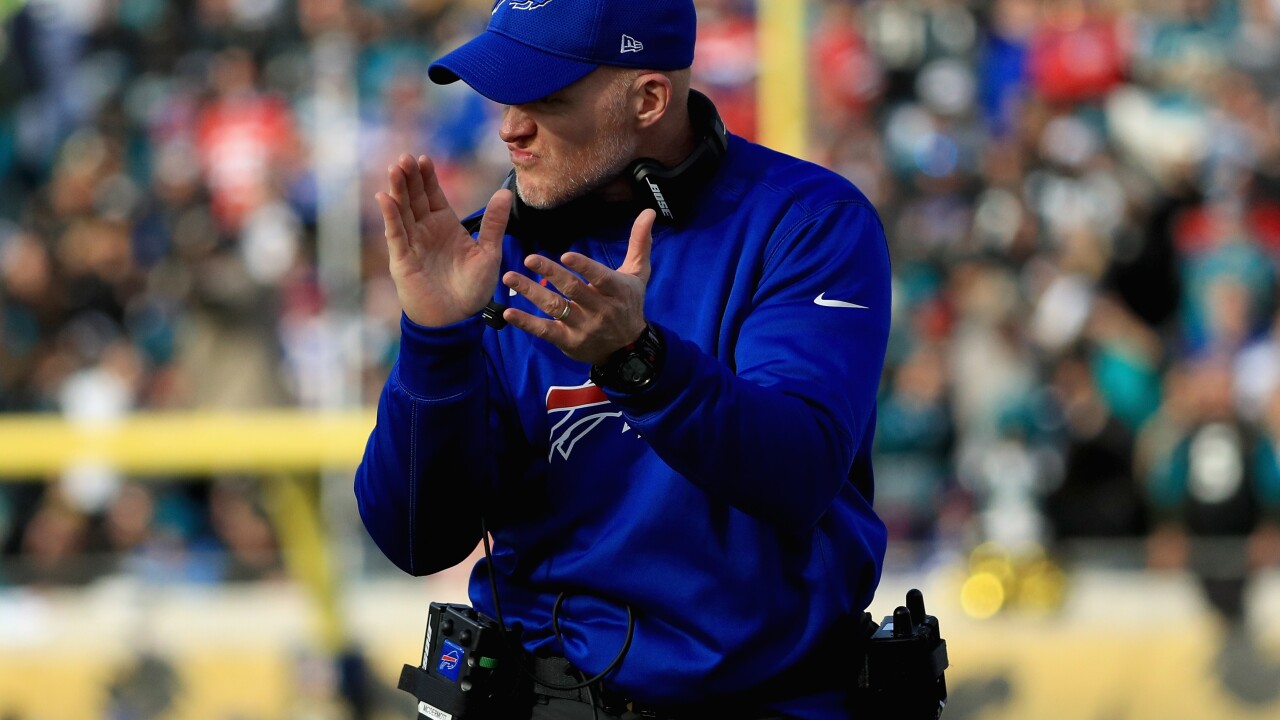 (WKBW) — In exactly one month the Buffalo Bills will begin their first training camp practice on the campus of St. John Fisher College. It's the beginning of the preparation for the 2019 season -- a campaign that many believe needs to show steps in the right direction of the rebuild.

The Bills went through with 12 spring practices -- five of which were available to the media, but had to deal with some injuries along the way. How might things have shifted since spring wrapped up?

My latest look at how the Bills roster could shape up this summer, with a slightly-early-but-not-egregiously-early 53-man projection:

Quarterback (2)
Josh Allen, Matt Barkley
- The quarterback spot is cut and dry at this point and, I think the only way Tyree Jackson could change that is by really showing the coaching staff something in all the preseason time he's bound to get. There isn't enough room on the roster at other positions to warrant the work-in-progress Jackson getting a spot.
Cut: Tyree Jackson

Running Back (5)
LeSean McCoy, Frank Gore, Devin Singletary, Sinorise Perry, Patrick DiMarco
- The running back group remains the same from the pre-spring projection. Devin Singletary received a fair share of reps with the first-team offense, which is a clear mark of intent from the team to have him involved in his first season -- health permitting. T.J. Yeldon did not work in with the first-team offense, and with three running back-first types ahead of him, he'll need to prove himself on special teams. For now, the edge goes to Sinorise Perry -- the player the Bills signed for his special teams prowess.
Cut: T.J. Yeldon, Marcus Murphy, Christian Wade

Wide Receiver (6)
John Brown, Zay Jones, Robert Foster, Cole Beasley, Andre Roberts, Victor Bolden, Jr.
- The first change from the pre-spring projection to post-spring is at wide receiver -- and with the team keeping six rather than just five. Victor Bolden, Jr. warranted enough time with the first-team offense and made quite a few plays to think that he is a real contender for a spot on the team. He'll need to couple his solid spring with outperforming all of his competition during camp and preseason, but he's off to a good start. He was on the active roster last season, so it wouldn't be a complete shock for him to make the team outright. Although I am curious as to how Duke Williams performs in training camp. The spring isn't the right setting for a receiver that wins on physicality and contested catches like him. If Williams is going to shine, it will be when the pads go on -- though it's not a sure thing.
Cut: Isaiah McKenzie, Duke Williams, Ray-Ray McCloud, Da'Mari Scott, Cam Phillips, David Sills V, Nick Easley

Tight End (4)
Tyler Kroft, Dawson Knox, Lee Smith, Tommy Sweeney
- The tight end group remains the same as last time -- even with the Tyler Kroft injury. Dawson Knox put together a solid enough spring to where you can think about him filling in during the interim if Kroft isn't ready for the beginning of the season. Of course, he'll need to continue to show that he wasn't just a spring wonder when things get more physical in the summer. However, he's off to a great start, and it could mean the end for Jason Croom in Buffalo.
Cut: Jason Croom, Nate Becker, Keith Towbridge

Offensive Tackle (3)
Dion Dawkins, Cody Ford, Ty Nsekhe
- For the Bills to keep a sixth wide receiver on the roster, another position needed to make way for the spot. This time around, it was at offensive tackle, where there isn't a huge need to keep a fourth player. The Bills signed LaAdrian Waddle to just a one-year deal, and he doesn't have a significant dead cap hit to release him ($400,000). With the Bills committing to both Dion Dawkins and rookie Cody Ford at the tackle positions, and with Ty Nsekhe as the third piece to that puzzle, the Bills have some wiggle room here. If the team elects to shift either Dawkins or Ford to guard, Waddle would be the next man in to replace as the third offensive tackle. As of today, he is squarely on the roster bubble.
Cut: LaAdrian Waddle, Conor McDermott, De'Ondre Wesley

Interior Offensive Line (5)
Mitch Morse, Spencer Long, Quinton Spain, Jon Feliciano, Wyatt Teller
- With all five players expected to be ready for training camp, this is looking like the group that will make up the remainder of the offensive line. The only potential for movement here is if Dawkins or Ford flips inside, which could mean that either Jon Feliciano or Wyatt Teller winds up on the outside looking in. That's also if the Bills only keep eight offensive linemen. It doesn't have to be the case, but there are a bunch of positions on this team that need an additional body as it is.
Cut: Russell Bodine, Ike Boettger, Vladimir Ducasse, Jeremiah Sirles, Garrett McGhin

Defensive End (4)
Jerry Hughes, Trent Murphy, Shaq Lawson, Mike Love
- At the beginning of spring workouts, Mike Love was working as a third-team defensive end. By the end of it, he was the second-unit defensive end working on the left side -- as the immediate backup for Trent Murphy. Love's rise coincides with Eddie Yarbrough's fall down the depth chart, having been with the third-team for each of the last three practices that were available to the media. Even though Love is in that fourth defensive end role right now, I would not be surprised to see the Bills be quite active near the middle or end of training camp in finding a more experienced fourth defensive end to round out the rotation. Around that time is when some unsigned free agents will make a move to sign with a team, and also when veteran players start to get released around the league. The Bills still like Love, a former undrafted player that's now in his second season, but he does have practice squad eligibility remaining.
Cut: Eli Harold, Eddie Yarbrough, Darryl Johnson

Defensive Tackle (4)
Star Lotulelei, Ed Oliver, Harrison Phillips, Jordan Phillips
- Defensive tackle remains the same as last time. Unless there is an injury of some sort, you can write this in ink.
Cut: Kyle Peko, Robert Thomas, LT Walton

Linebacker (6)
Tremaine Edmunds, Matt Milano, Lorenzo Alexander, Julian Stanford, Deon Lacey, Vosean Joseph
- All spring, fifth-round pick, and rookie, Vosean Joseph spent the majority of his reps with the third-team defense. While it isn't exactly ideal in the hopes that he can make an early impact, it's good to remember that the Bills did something similar with Siran Neal as a rookie -- also a fifth-round pick -- in 2018. Even though veteran Maurice Alexander was getting most of the time with the second-team defense in the spring, that could be the strategy to not overwhelm the rookie in his first season. GM Brandon Beane is not in the business of releasing his draft picks in their rookie season. He gives most of them at least one season to figure out life in the NFL, which is why I'm not worried about Joseph at this point. The Bills like the work that both Julian Stanford and Deon Lacey do on special teams, which means Alexander will have to stand out to convince the Bills to keep a seventh linebacker, or that he should be on the roster instead of Lacey -- who is also an outside linebacker.
Cut: Maurice Alexander, Corey Thompson, Tyrel Dodson, Juwan Foggie

Cornerback (7)
Tre'Davious White, Levi Wallace, Taron Johnson, Kevin Johnson, EJ Gaines, Siran Neal, Lafayette Pitts
- You might notice something different about this group -- the addition of Siran Neal. The Bills still classify him as a safety on the roster on the website, but that was in name only. Unless they made a dramatic shift in the practices that the media were not allowed to attend, Neal is now a cornerback -- working exclusively in the nickel role as head coach Sean McDermott's 'big nickel' for bigger receivers. As time goes on, I would expect the Bills to reclassify him on the depth chart and the roster to either 'CB' or 'DB.' I didn't see him take a single snap at safety. As for the rest of the group, it remains the same. They have youth, veteran depth, established starters, and a special teams asset in Lafayette Pitts.
Cut: Ryan Lewis, Cam Lewis, Denzel Rice

Safety (4)
Micah Hyde, Jordan Poyer, Rafael Bush, Jaquan Johnson
- With Neal not factoring into the safety room, that means there isn't a tough decision to make with this group. They'll look to develop Jaquan Johnson in the background during the 2019 season as Micah Hyde and Jordan Poyer continue their role as impact starters, with Rafael Bush being the capable veteran backup.
Cut: Dean Marlowe

Special Teams (3)
Stephen Hauschka (K), Cory Carter (P), Reid Ferguson (LS)
- In the five practices that I could see, I would give the slight edge to Cory Carter in the #CoryVsCoreyPuntapalooza. For now. Stay tuned.
Cut: Corey Bojorquez (P), Chase McLaughlin (K)