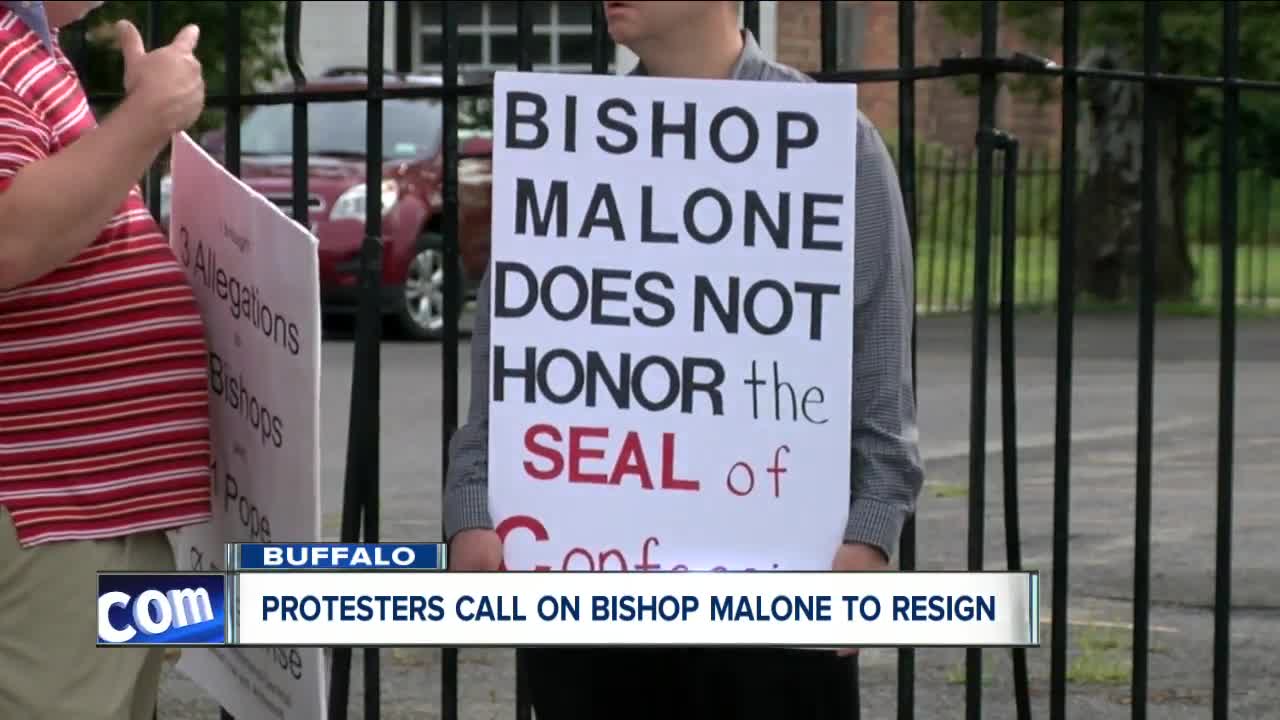 Just days after his sudden resignation from the Christ the King Seminary, Stephen Parisi took to the streets for change outside of Saint Stanislaus Church.

BUFFALO, N.Y. (WKBW) — Just days after his sudden resignation from the Christ the King Seminary, Stephen Parisi took to the streets for change outside of Saint Stanislaus Church.

"By change, the first step is [for] Bishop Malone to step down," said Parisi.

Parisi served as Dean of Seminarians, a leadership role for young men pursuing priesthood. He felt he had to resign for his own conscience.

"I'd been struggling for a while, seeing how these cases were being handled by the diocese, hearing specifics on how victims were being treated, it was absolutely revolting to me," said Parisi

Parisi and several other whistleblowers blame Buffalo Bishop Richard Malone and a culture of blackmail for corruption in the diocese.

"If the Bishop comes to them and says, there's a problem with you, that priest can say, hey I've got dirt on 10 guys you can't mess with me and it sounds like something from the mafia or something," said whistleblower and former executive assistant to Bishop Malone, Siobhan O'Connor.

Demonstrators chose Saint Stanislaus Church because of its closeness to Bishop Malone's home. Along with his resignation, they'd like to see a larger investigation.

"When is Pope Francis going to step up? When is Cardinal Dolan, in New York, the Metropolitan Archbishop of this province...when are they going to do something," asked advocate for victims of clergy sexual abuse James Faluszczak.

Protesters plan to continue speaking out against Bishop Malone until he resigns.

"If he's not going anywhere, we're not either," said O'Connor.

7 Eyewitness News Reporter Taylor Epps asked Parisi if he would consider going back to the seminary if Bishop Malone does resign.

We reached out to the Diocese for a comment and they sent this statement:

"Earlier today, while many Catholics were attending Sunday Mass, three individuals chose to gather in front of St. Stanislaus Church and Bishop Malone’s residence. These individuals were within their rights, and displayed various poster signs. The Diocese of Buffalo, has responded to these topics previously and it is unfortunate that some have not received or understood the responses. It is necessary that the truth, even if not accepted by some, be shared again:

Bishop Malone has never allowed any priest with a credible allegation of abusing a minor to remain in ministry. He has stated it is his responsibility to lead the Diocese of Buffalo and he will continue to do so by continuing to offer opportunities to bring healing to victim-survivors of abuse and renewed trust to the people of the Diocese.

In addition, there has never been an accusation that Bishop Malone violated the seal of the confessional. Mr. Parisi and others make the outrageous and unsupported claim that Bishop Malone has not honored the seal and ignored a complaint that Fr. Jeffrey Nowak violated the seal of the confessional. Bishop Malone has never ignored this complaint. To the contrary, Bishop Malone has initiated an investigation of the complaint. When the individual who made the complaint was first questioned, his response was vague and needed follow up. Fr. Nowak has been removed from ministry while the investigation continues. The Office of Professional Responsibility has tried to contact the individual making this complaint but he has yet to respond. The Diocese will continue to pursue this claim and take additional action if necessary.

Finally, in reference to Mr. Parisi’s recent interview statements regarding seminarian personal finances, students accepted in the Program of Priestly Formation (PPF) for the Diocese of Buffalo sign promissory notes for 0 (zero) percent interest loans for tuition, room and board expenses. Upon ordination to the priesthood, these loans are forgiven. For those without medical insurance, a policy for students is provided. Men discerning the call to enter the PPF are informed of these provisions. Some candidates have chosen to delay their entry into the program so they can be adequately prepared for their time of discernment and study. Seminarians who graduate from Christ the King Seminary graduate with a Master’s Degree and, like their counterparts in the secular world, it is not unimaginable that they will incur student debt which focusing on their studies. The Diocese of Buffalo and Christ the King Seminary has assisted seminarians with emergency funding when possible."

-Kathy Spangler, Office of Communications, Diocese of Buffalo
Copyright 2019 Scripps Media, Inc. All rights reserved. This material may not be published, broadcast, rewritten, or redistributed.