College faculty senate issues a vote of "no confidence" 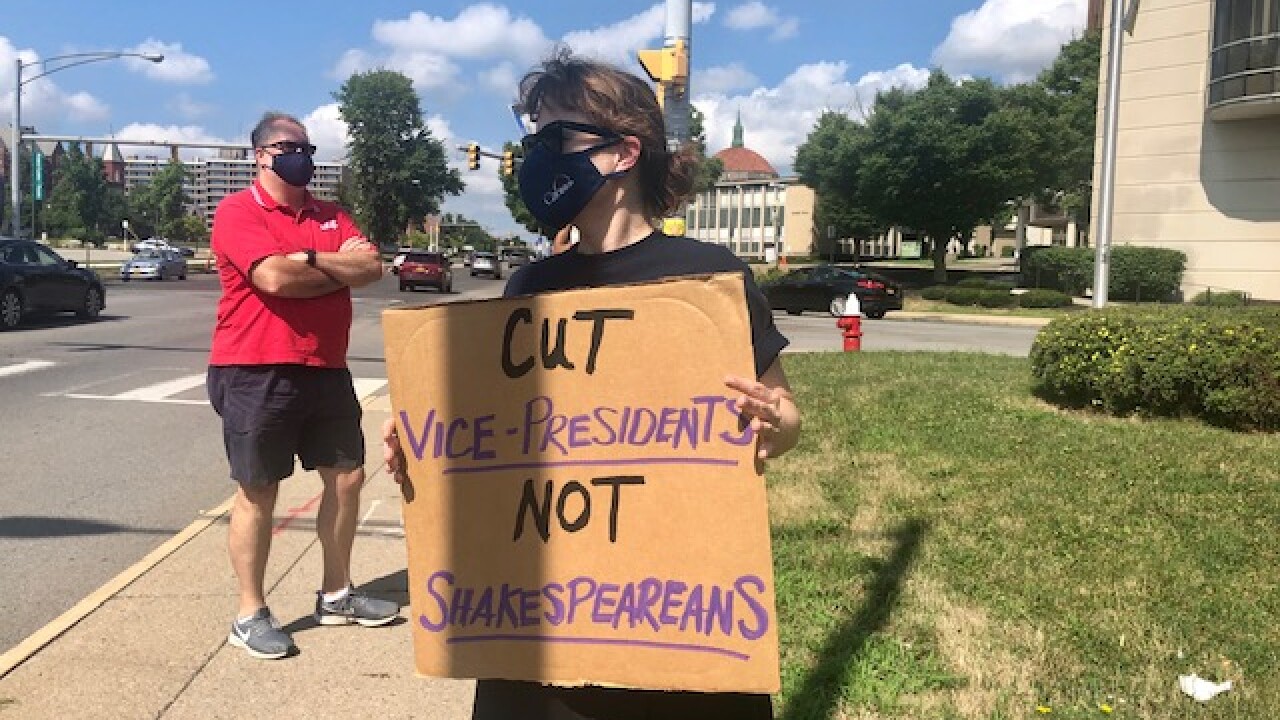 Eileen Buckley
Dr. Tanya Loughead, Canisius philosophy professor, is protesting the proposed layoffs. She is not being laid off. <br/>

BUFFALO, NY (WKBW) — Opposition is mounting against planned layoffs and cuts at Canisius College in Buffalo.

Monday the college revealed it is facing a $20 million deficit, forcing layoffs of 23-full time faculty members and 71 other staff members. The college points to the current COVID-19 pandemic as the reason for the cutbacks.

"The COVID-19 pandemic created, created a kind of, well, it created a crisis for us," stated John Hurley, president, Canisus College, in a 7 Eyewitness interview Monday.

A sit-in is being was staged outside the college campus late Thursday afternoon.

The American Association of University Professors (AAUP) issued a statement Thursday morning in response to the layoffs.

“A call for shared and equitable sacrifice the personnel cuts proposed by the trustees and upper administration fall disproportionately on faculty, academic staff, and facilities workers,” the statement reads.

The college is slashing nine majors:

The AAUP said it is calling on Canisius College President John Hurley and the Board of Trustees to “release full information about cuts across every sector of the college.

“We ask that the Board rescind the proposed cuts and engage in meaningful dialogue with the college community. Together we hope to create a more viable and equitable plan that sustains both the academic and financial health of the college.”

Dr. Tanya Loughead, philosophy professor, is an organizer of Thursday’s planned ‘sit-in’. Loughhead does not face a layoff, but is fighting to end the cuts. She said they are calling for upper-level administration cuts and referred to the AAUP statement.

“Almost no cuts seem to have been made to upper-level administration: Vice Presidents, Associate or Assistant VPs, Head Coaches, Executive Directors, and others who are among the highest paid employees at the college. Perhaps some of these high-salaried employees including the President would volunteer to halve their salaries until Canisius weathers the storm. This measure could prevent several cuts and demonstrate their commitment to the mission of the College. The proposed cuts do not reflect the “faith that does justice.” This is not shared and equitable sacrifice.”
Loughead said college diversity is also being effected by the cuts.

Loughead is an organizer of Thursday’s planned ‘sit-in’. Loughead tells 7 Eyewitness they’ve gained a great deal of support in their effort. She said the rally began as an idea from two Canisius alumni.

“Many more alumni joined the Facebook group calling for the rally. Soon after, faculty, interested people from the area, and other local unions joined the cause. We can expect today, the support of several Buffalo-area unions,” Loughead stated in an email.

About 50 to 60 protesters attended the sit-in. The marched from Jefferson and Main to the front of the campus's Churchhill Academic Tower.

At Thursday's rally Loughead carried a sign stated "Cut Vice-Presidents - Not Shakespeareans" Loughhead and other faculty who protested are against cuts to liberal arts programs.

Loughead confirmed that the college's faculty senate issued a vote of "no confidence".

Other protest signs stated "Where leaders are fired?" and "You Can do Better."

A peaceful protest against proposed cuts to faculty and majors @CanisiusCollege is underway outside the campus. @WKBW pic.twitter.com/QjPE9AvcUb

The statement from The AAUP outlines the following:

• 23 full-time faculty threatened with termination, and others urged to retire early;

• 12 administrative assistants, depriving academic programs of support across the college;

• Predominantly women and people of color (especially in the academic staff ranks), casting doubt on the College's declared commitment to diversity;

• Several of our most excellent professors (three of the four Spring 2020 award winners in the College of Arts and Sciences, along with many other award-winning faculty members).

Cuts in other areas of the college fall primarily on lower-paid staff:

• Facilities workers of the Service Employees International Union (SEIU) were terminated, including all groundskeepers, building maintenance staff, locksmiths, and painters. All union officers were laid off, and so were all people of color in the skilled trades.

• 9 Athletic staff (full-time) were laid off

In a 7 Eyewitness News interview with Anchor Ashley Rowe Thursday, president Hurley said they is disappointed in the reaction. Hurley says while they are eliminating nine majors, they are not eliminating courses.

"Our younger graduates are being led to believe that by some of the effective faculty and some of the people you are talking to that we are decimating - we're cutting this all together and that's just not the case," declared Hurley.

Hurley said he believes it has been based on "distorted" views of what is happening at the college. He tells us they are making the cuts because "enrollment has shrunk" and there is a need for fewer faculty members.

"If we don't make these cuts on the academic side - I need $1,500 per student more to cover that," Hurley explained.

Hurley also stated Monday that most of colleges revenue comes from student tuition, and that the net tuition revenue is expected to take a multi-million dollar hit.