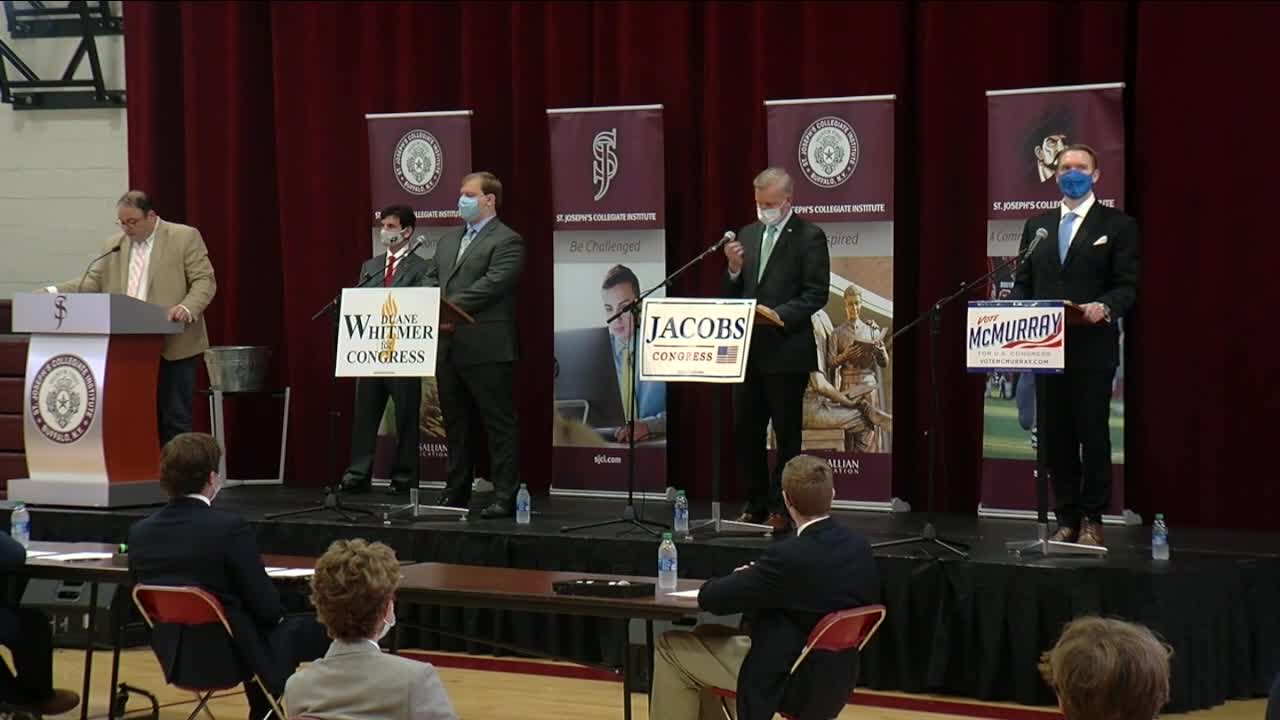 St. Joe’s teacher Ted Lina served as debate moderator and kicked off the questions, asking if they believe president trump has done a good job handling the pandemic.

“The worst crisis of our life and the government failed,” responded Whitmer.

“No one has gotten it perfect. I think the president has done a good job,” Jacobs answered.

Students also asked questions, including what the candidates think about racism and fighting for racial equity.

“Unfortunately, many of the protests were hijacked by radicals who turned them into violent episodes,” Jacobs remarked.

“Mr. Jacobs would not even say the words Black Lives Matter. In my last debate with him, he said it was a radical ideology,” McMurray replied.

“End the war on drugs — end the war on guns — get rid of the victimless crimes — it will reduce systematic racism,” Whitmer responded.

And while answering questions about whether marijuana should be legalized, McMurray use it to take a jab at Congressman Jacobs on health care.

“Mr. Jacobs signed on to funding lawsuit to take away pre-existing conditions protections that are part of the Affordable Care Act — that’s one of the things he did when he was in Congress for just three moths,” McMurray stated.

“I am for protecting pre-existing conditions. I actually, in the first couple of months, I co-sponsored legislation to do just that,” Jacobs replied.

After the debate, Whitmer took aim at Jacobs blaming him for giving Governor Cuomo executive power during the pandemic.

“But doing a move like that is absolutely insane,” Whitmer said.

McMurray filed a lawsuit this week suing his former employer Delaware North for placing him on unpaid leave several years ago.

The company is owned by the Jacobs family. But McMurray refused to discuss it when asked if it was a political move.

“Why now?” Buckley asked. “There's legal reasons for it that I’m not going to get into that will resolve in court,” answered McMurray.

“I do think it's a little ironic that he does it two weeks before the election,” Jacobs noted.

These are some of the responses on a few of those topics from the candidates:

Jacobs said there is a “need for comprehensive immigration” reform, but the southern boarder must be secured.

“We do have a crisis on the southern border with illegal immigration, with child trafficking down there with drug trafficking,” Jacobs stated.

McMurray said the borders must be secured to keep people safe, but pointed out the U.S. is a country of immigrants.

“Mr. Jacobs sounds very different today than he did a few months ago when he was running commercials vilifying immigrants — showing a pictures of a wall and how tough he was driving around in a truck,” McMurray said.

Whitmer responded to the immigration issue saying the country needs to create an “EZ-Pass” type of immigration where if you’re certified in another country, you would be allowed to come to the U.S. and travel back home.

“As far as the southern border — end the war on drugs. It takes the power from the cartel. We stop locking up African American people for victimless crimes. It stops the power of the cartel and allows Mexico to take their country back,” Witmer answered.

Should marijuana be legalized?

Jacobs said he supports “medical marijuana only. “I’m not for legalization”.

McMurray said it should be legalized.

The candidates were also asked if they support their party’s presidential candidate.

“And now in 2020 we have the chance to elect the first female president,” Whitmer replied. “I look forward to voting for her."

Jacobs said he “yes” he supports Trump for reelection.

“His major policies have been very good for this nation,” Jacobs said.

“I think it’s damming for Mr. Jacobs to stand up here and praise President Trump given the situation of our country today,” McMurray declared.