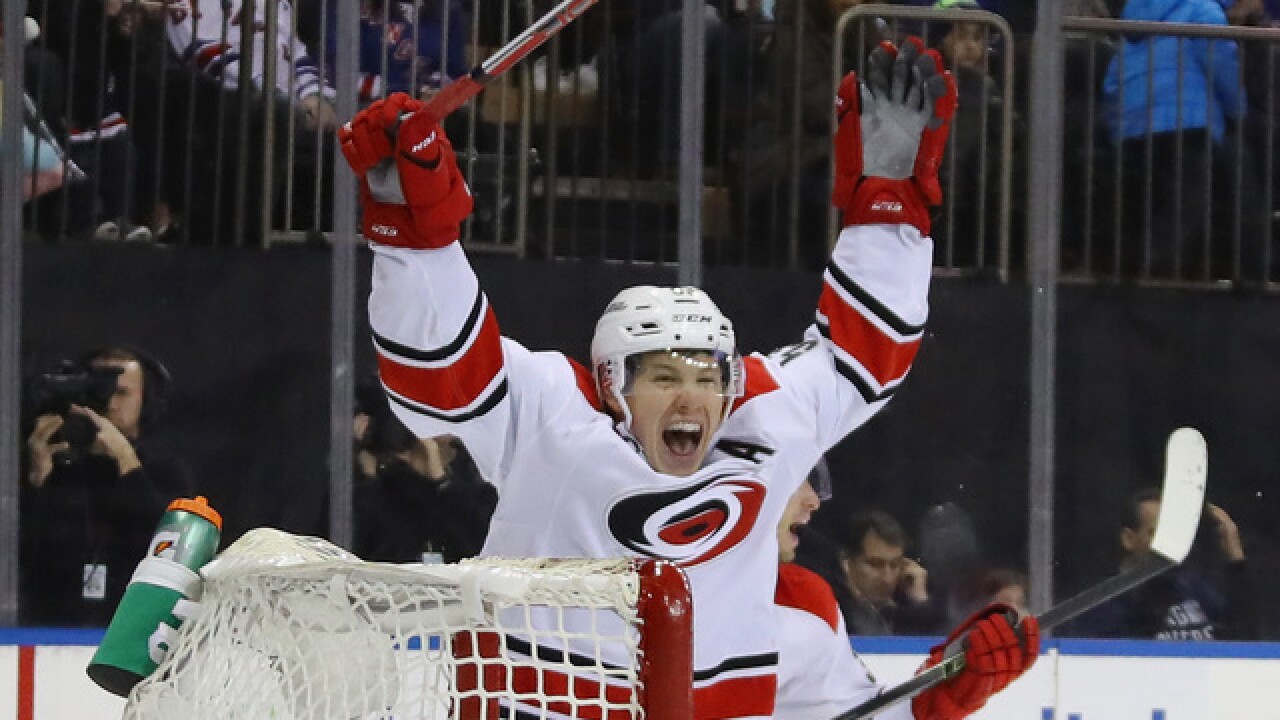 Copyright 2018 Scripps Media, Inc. All rights reserved. This material may not be published, broadcast, rewritten, or redistributed.
Bruce Bennett
<p>NEW YORK, NY - DECEMBER 03: Jeff Skinner #53 of the Carolina Hurricanes celebrates a goal by Victor Rask #49 (not shown) at 6:36 of the third period against Henrik Lundqvist #30 of the New York Rangers at Madison Square Garden on December 3, 2016 in New York City. The Rangers defeated the Hurricanes 4-2. (Photo by Bruce Bennett/Getty Images)</p>

Before the start of free agency and the NHL Draft the Buffalo Sabres had a massive void down the left side of their lineup. Have no fear, Jason Botterill is here to save the day. In the last few months the Sabres GM has made some crafty moves to add both Conor Sheary from Pittsburgh and on Thursday, Jeff Skinner from Carolina.

So what could the new look Sabres lineup look like on opening night?

Jeff Skinner has spent the better part of the last two seasons on the wing with Derek Ryan and Victor Rask at center. Both are very respectable players but neither provides the playmaking ability or incredible speed that makes Jack Eichel such an elite talent.

Together Eichel and Skinner could become a dynamic duo the Sabres have been without for years. There is no guarantee the two will gel perfectly together right out of the gate. But I'd bet the house the duo gets a look together at training camp.

Chances are, Sam Reinhart, another solid playmaker will be flanking the right side of the top line. While he doesn't have the speed that either Eichel or Skinner has, he can create opportunities for both pure goal scorers. In a perfect world, Reinhart will continue his red-hot offensive production from the second half of last season.

Reinhart is still waiting on a new deal but I'd be shocked if he isn't resigned sometime in the next month.

When acquired from the Penguins, many people [myself included] believed that Sheary would be paired with Eichel. That could very well still happen, but sliding him onto the second line might make a little more sense after the Sabres most recent splash.

Like Skinner, Sheary adds much-needed speed to the Sabres lineup and gives the team more depth than they've had in recent years. One of the Sabres biggest problems has been their lack of scoring at even strength, especially from their second and third lines. Sheary should help that issue.

At this point, you're probably wondering where is Casey Mittelstadt? We'll get to that shortly. But for now, it makes sense to protect Mittelstadt a bit and play him on the 'third' line. That means in this projection Berglund slides into the middle slot on the second line. While he doesn't have the offensive upside that Mittelstadt has, he's no slouch; last season with St. Louis, Berglund posted 26 points in 57 games. Those numbers aren't ideal for a No. 2 center but they could increase with the likes of Sheary and Okposo.

As for Okposo, entering his third season with the Sabres, they'll need more out of their big offseason addition from two-years ago. In my opinion, Okposo gets a bit of a pass for his struggles last season after his health scare in early 2017. But if the Sabres are going to have any success next season they'll need closer to the production Okposo provided in his first year with the Sabres [45 points in 65 games] rather than his lackluster numbers from last season [44 points in 76 games].

Good news Sabres fans -- this has the potential to be a pretty exciting 'third' line. The quotes around third are because this line will play just as significant of a role as the aforementioned trio, especially if the Sabres need some offense.

Mittelstadt absolutely has the skill and potential to one day become a very good top-six forward in the NHL, it just may take time. Limiting his minutes and responsibility seems like the right thing to do, at least next season.

As for Rodrigues, he's the versatile player on this line who can contribute at both ends of the ice.

By all accounts, Thompson has an exceptional shot and can thrive if he plays with someone who can create space and make plays. Mittelstadt can certainly do that. Pairing the Sabres newest prospect with one of their most coveted makes sense if Thompson has a strong training camp/preseason. If he doesn't impress, Thompson can start the season in Rochester.

Not bad at all when you consider who has played on the Sabres fourth line in recent memory. With this lineup, it's not ridiculous to think the Sabres could actually roll four lines for the first two periods of most games. Expecting a dip in production from Pominville and Sobotka is likely with a potential drop off in minutes. But this is a trio who could compliment each other well and still chip in offensively every once in a while.

It has been decades since the Sabres had a franchise defenseman, and while Dahlin is still an 18-year-old kid, you would be hard-pressed to find someone who doesn't believe he'll become one of the best defenders in the league.

Nelson had a short but impressive stint with the Sabres last season, scoring three goals and adding five assists in 37 games. As the season carried along he continued to improve, earning a two-year contract extension in May ($812,500 per). Hunwick has plenty of NHL experience and if the injury bug bites, Hunwick can easily slide into the lineup.

For weeks leading up to free agency, the Sabres were linked to Hutton and just minutes after noon on July 1, the Sabres made it official. Hutton isn't a proven starter in the league but is coming off an incredible season.

After a strong start to last season earning AHL All-Star honors, Ullmark regressed and struggled after suffering a concussion. In the playoffs, Ullmark allowed 16 goals in three games with Rochester.  Giving Ullmark 30 games next seasons would be ideal for his continued development.