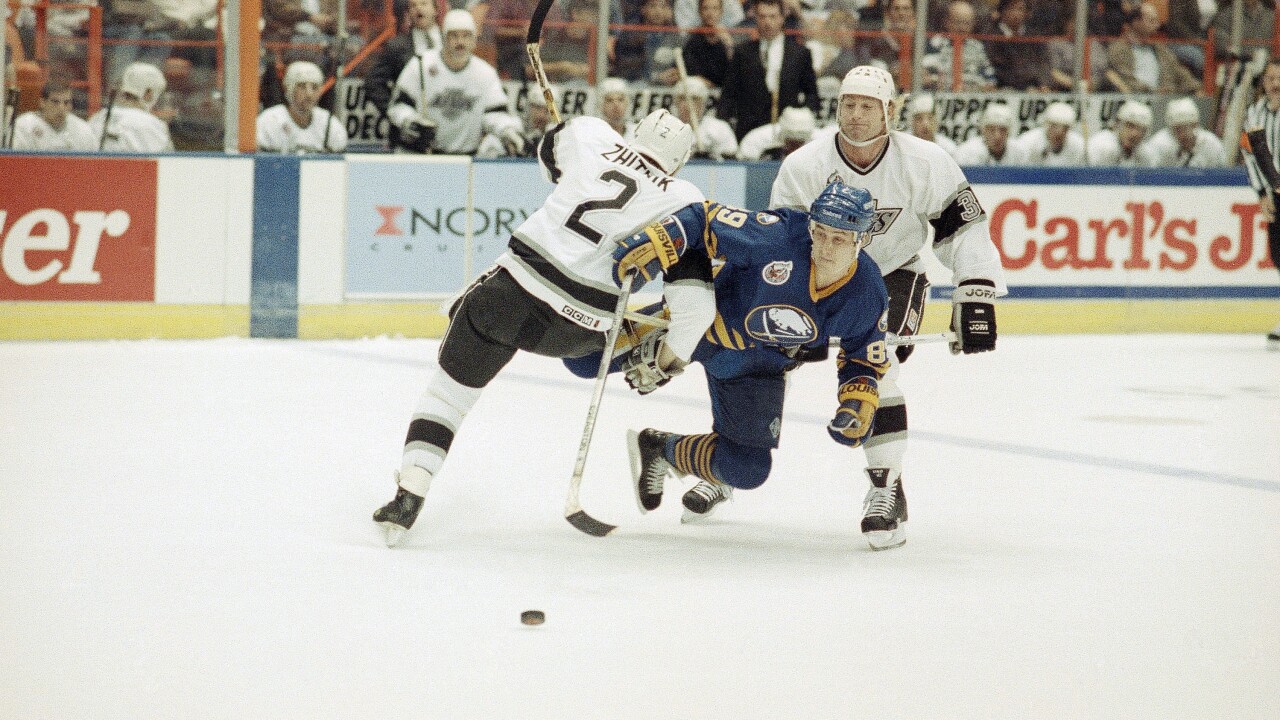 Kevork Djansezian/ASSOCIATED PRESS
Buffalo Sabres Alexander Mogilny, center, is sandwiched, in between Los Angeles Kings Alexei Zhitnik, left, and Marty McSorley, as he attacks the Kings goal during first quarter action in Inglewood, California on Saturday, Nov. 7, 1992. There was no penalty on the play. (AP Photo/Kevork Djansezian)

BUFFALO, N.Y. [WKBW] — The waiting game will continue for Buffalo Sabres great Alexander Mogilny, who learned on Wednesday he would not be part of the 2020 Hockey Hall of Fame Class. Mogilny has now been selection eligible for 12 years.

Introducing your Hockey Hall of Fame inductees for 2020

Remembered most for his defection from Russia in 1989, Mogilny spent six seasons with the Sabres, including a 76-goal performance in 1992-1993. While with Buffalo, Mogilny scored 211 goals and tallied 444 points.

"I played on quite a few teams and a question that frequently comes up is who was the most talented guy that I played with? Having played for Team Canada internationally, and my NHL teams, Alex always stood out as the most dynamic," former Sabres teammate Grant Ledyard told WKBW. "He and Pavel Bure were amazing talents! Just as good people as they were players."

After leaving Buffalo, Mogilny played for 10 more seasons with the Vancouver Canucks, New Jersey Devils, and Toronto Maple Leafs. While with New Jersey, Mogilny won a Stanley Cup in 2000. In 2001, Mogilny and the Devils came up one game short of winning again, falling in game seven to the Colorado Avalanche.

Mogilny now serves as the President of KHL club Amur Khabarovsk. Prior to joining Amur Khabarovsk, Mogilny served in the same role with Admiral Vladivostok, another KHL team.

Mogilny is one of just 29 players who make up the "Triple Gold Club" featuring players who have won an Olympic gold medal, a World Championships gold medal, and a Stanley Cup. Along with his other accolades, Mogilny is a six-time NHL All-Star, three of which came while with the Sabres. In 2003, Mogilny won the Lady Byng Trophy, awarded to the player who displays both skill and sportsmanship on and off the ice.