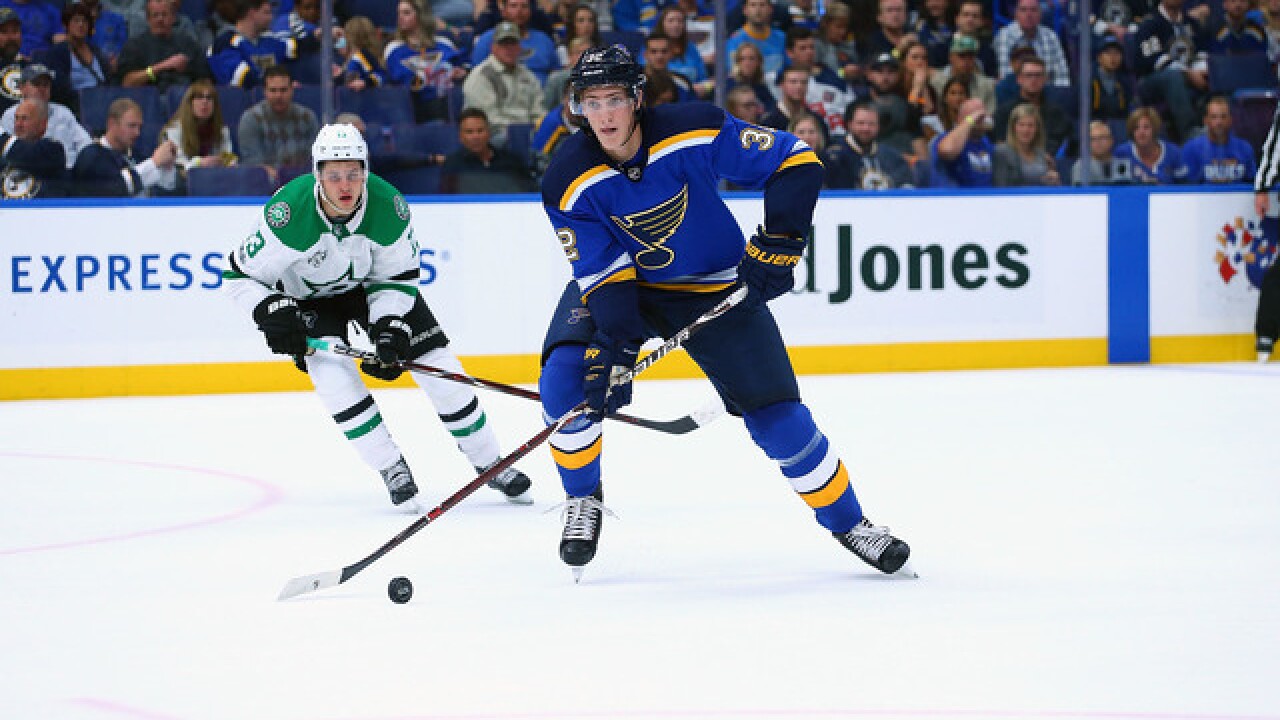 Copyright 2018 Scripps Media, Inc. All rights reserved. This material may not be published, broadcast, rewritten, or redistributed.
Dilip Vishwanat
<p>ST. LOUIS, MO - OCTOBER 7: Tage Thompson #32 of the St. Louis Blues in action against the Dallas Stars at the Scottrade Center on October 7, 2017 in St. Louis, Missouri. (Photo by Dilip Vishwanat/Getty Images)</p>

Tage Thompson has spent his entire life on the move. But he's ready to settle down and make a name for himself in Buffalo.

As a kid, he attended nine different schools. His family followed around his dad, Brent, who was playing and coaching professional hockey.

"My dad went through it for 15 years playing and coaching so my family has been moving around obviously my whole life," Thompson said Monday. "It's tough but I think it helps you for a situation like this where you're not expecting something and you've got to pick up and move to a new area with new faces and a new role."

The 6'5" 20-year-old right-winger never expected he would be dealt from St. Louis but says he's ready for a bigger role with a new team.

"We feel like this is a great fit for me and it's going to be exactly what I've been looking for as far as an opportunity to go in and play a lot and produce and help a team win. The organization thinks the same thing," Thompson added.  "So it's nice to be on the same page and be given an opportunity."

"I would describe myself as a big, power forward that has a knack for making plays, has pretty good skill with the puck and I think I've got a shooter's mentality. I love to shoot the puck and score goals, so that's kind of me as a player."

When asked where Thompson feels he needs to improve, he said every player can get stronger and add speed. In St. Louis, Thompson said he felt pigeon-holed as the Blues relied on their veteran players. In Buffalo, he's hoping to prove right away that he can be a guy the Sabres can count on.

What could the #Sabres opening night lineup look like now that Ryan O'Reilly has been traded? I don't care if it's only July, let's have some fun @WKBW https://t.co/LzzLvB9Ea7

"Based on our talks [with Jason Botterill] I think they are excited to have me and I'm excited to be a part of it," Thompson added. "They really have big plans for me to be a big part of the team and play a lot, have a lot of opportunities to be successful and put up points and help the team win in that way. So yeah, I'm really excited and hopefully, I can find a spot in the top six and produce."