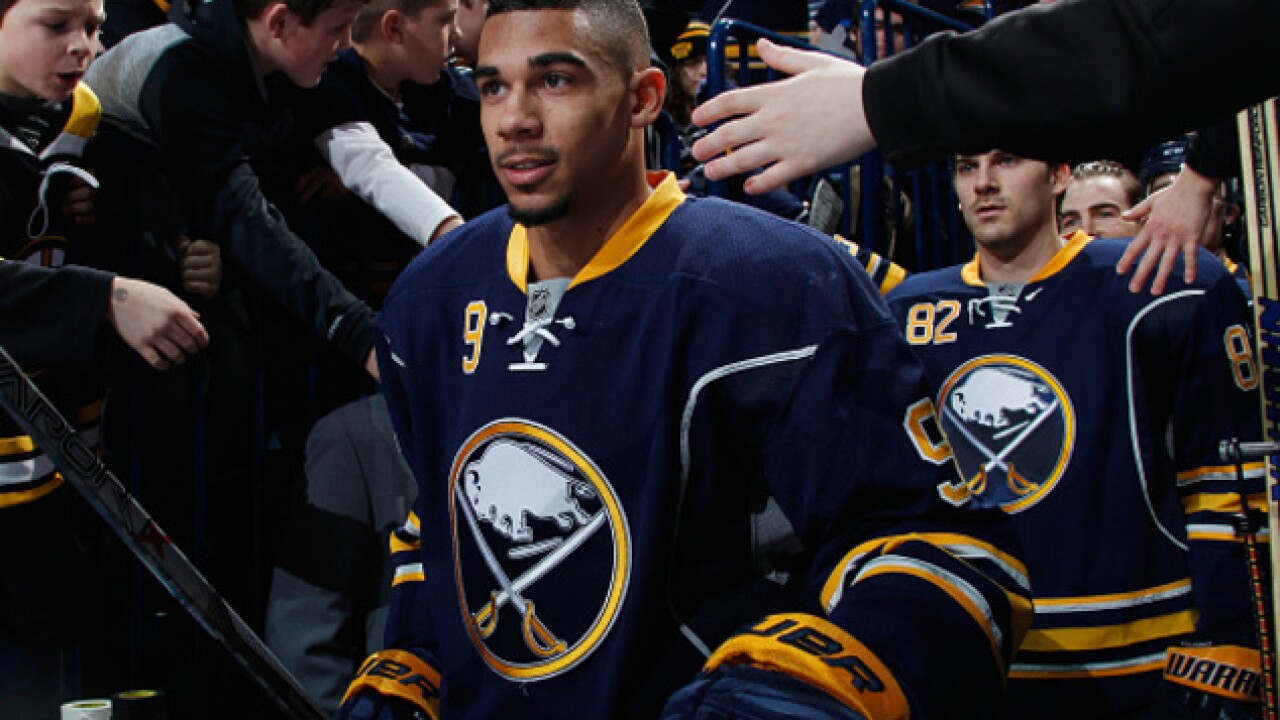 Copyright 2017 Scripps Media, Inc. All rights reserved. This material may not be published, broadcast, rewritten, or redistributed.
Jen Fuller
<p>BUFFALO, NY - JANUARY 15: Evander Kane #9 of the Buffalo Sabres heads to the ice to warm up to play the Boston Bruins at First Niagara Center on January 15, 2016 in Buffalo, New York. (Photo by Jen Fuller/NHLI via Getty Images)</p>

Trade talk centered around Evander Kane is nothing new, but Robin Lehner? That's not something you hear very often.

According to TSN's Darren Dreger, who joined 'The Instigators' on WGR 550 Friday morning, he believes the Sabres would be open to trading their starting goaltender and he thinks Buffalo wants to trade Evander Kane. Dreger went on to say that there's 'not much going on for Kane right now', but that he believes Botterill [and now Housley] can find a fit for him.

Dreger: "I believe that Buffalo absolutely would trade Robin Lehner, and I believe that they want to trade Evander Kane." #Sabres

Each NHL team is responsible for submitting their expansion draft protected lists by 5 p.m. on Saturday, June 17. Three hours before the lists are due, there will be a transaction freeze up until Thursday, June 22 at 7 a.m.

Do I expect either deal to happen?

Would I be shocked?

Do you think they should trade Kane and/or Lehner?

I was very adamantly against trading Evander Kane last season, but as the months have gone by I've accepted the fact that I don't think Kane is signing an extension in Buffalo. There's not any one reason that makes me feel that way, but I've just got a hunch.

That being said, if the Sabres can swap Kane for a top-four defenseman, I think Jason Botterill should consider making a deal, if not quickly yelling yes before hanging up the phone. As far as forwards go, he's one of the Sabres most valuable, but losing him for nothing would be silly, especially with a return that is believed to be pretty high.

Like I said earlier, I don't think he'll be moved until the trade deadline, but if he is, the Sabres are doing what they have to.

Lehner is a little more complicated and to me, it all comes down to what's the return and Cal Petersen's status.

If Botterill believes he has a deal in place with the Sabres coveted goaltending prospect, trading Lehner may be a long-term move that makes sense. In the short-term, it all of a sudden creates a massive need, unless, of course, Linus Ullmark is ready to be an NHL starting goaltender.

I don't think he is.

If someone comes calling and offers up a good, young defensemen then moving Lehner wouldn't be absurd. He'll be a restricted free-agent after this year, and will likely command a pay raise after a solid 2016 campaign. But if the Sabres make that move they better be ready for a wild ride this between the pipes. Even if they lock up Petersen, they'll be a few years away from being comfortable in the blue paint.