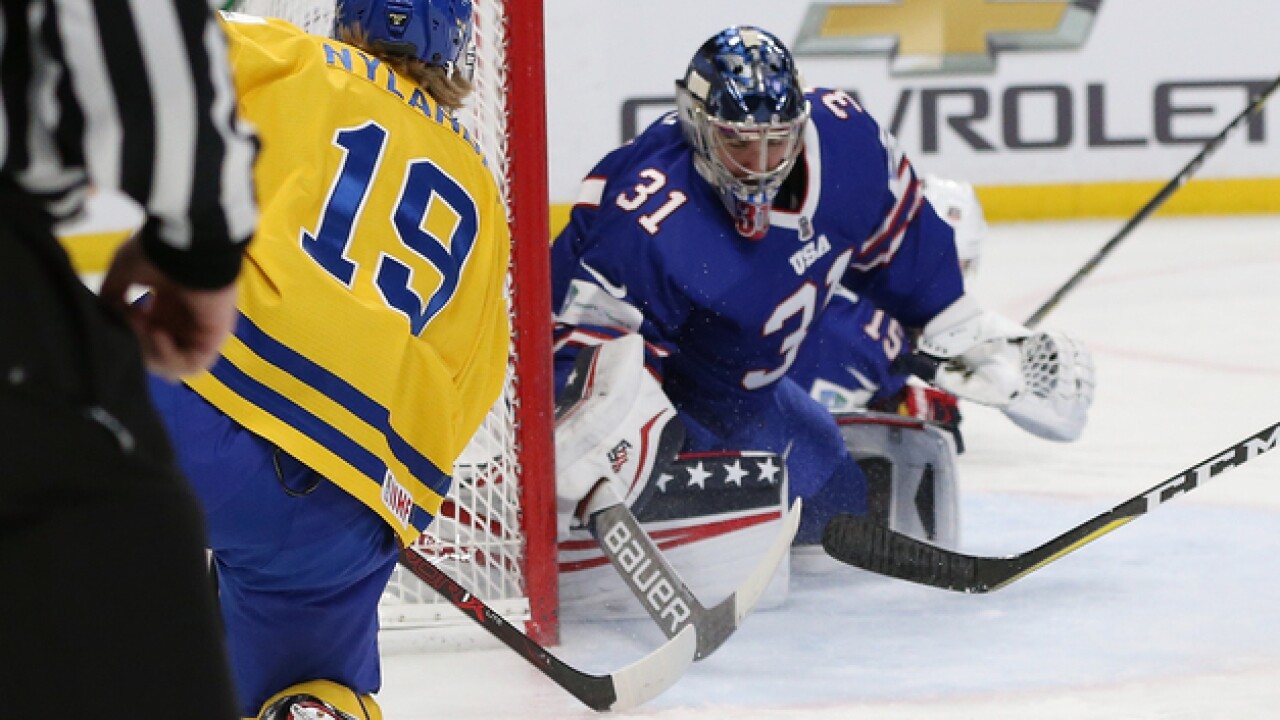 Copyright 2018 Scripps Media, Inc. All rights reserved. This material may not be published, broadcast, rewritten, or redistributed.
Kevin Hoffman
<p>BUFFALO, NY - JANUARY 4: Joseph Woll #31 of United States makes the save against Alexander Nylander #19 of Sweden in the first period during the IIHF World Junior Championship at KeyBank Center on January 4, 2018 in Buffalo, New York. (Photo by Kevin Hoffman/Getty Images)</p>

Home ice proved to be anything but sweet for Team USA, who can finish with no better than a bronze medal after falling to Sweden 4-2 in the semifinals of the World Junior Championship. With their win, Sweden will play the winner of the Canada and Czech Republic game Thursday evening. The loser will take on the U.S. in the bronze medal game on Friday at 4 p.m.

Up and down day for Mittelstadt

To many, Sabres 2017 first round draft pick Casey Mittelstadt has been the MVP of the tournament heading into the final day. On Thursday, however, Mittelstadt failed to register a point for the first time in the tournament as his team fell to Sweden. His best chance came in the finals minutes of the second period as he was stopped point blank on a 3-on-0 breakaway. Mittelstadt tried to slide a backhander five-hole but was turned away.

Not the ideal result for a 3-on-0…. pic.twitter.com/iiv66Yuuva

Despite his lack of production against Sweden, Mittelstadt still leads the tournament with 10 points in six games (leader before CAN vs. CZE game). For as awesome as Mittelstadt has been, I think many would agree that he needs to shoot the puck more. His hands are next level and he's made countless perfect passes during the tournament but while doing so missed some solid chances because he didn't shoot. We're splitting hairs here -- it has been an outstanding showing for the 19-year-old Minnesota freshman.

Alex Nylander said two weeks ago his main focus during this tournament was to win a gold medal. On Friday he'll have his chance in his third World Junior Championship.

With seven points [1G, 6A] in six games, Nylander is actually on pace to have the fewest points he's had in any of his three tournaments. While this may startle some Sabres fans, I don't think Nylander has had a bad tournament. He's been one of Sweden's go-to players in almost every scenario and has looked pretty solid defensively, an area he's admitted he needs to improve.

As good as advertised

Rasmus Dahlin, for my money, had his most impressive game of the tournament. On multiple occasions the smooth-skating defenseman made U.S. defenders look silly as he trotted down the ice with ease.

In six games Dahlin has been held without a goal but has picked up six helpers. More likely than not Dahlin will be the first overall pick in the upcoming NHL Draft and his play in this tournament will have teams running to the podium if they are lucky enough to win the draft lottery. It's a little too premature to make any comparisons but Dahlin looks like he's going to be an elite NHL defenseman for a long, long time.

You should be excited for Rasmus Dahlin, especially if your team isn’t doing so great. He will be going 1st overall this coming draft. pic.twitter.com/zWWgWEPMei