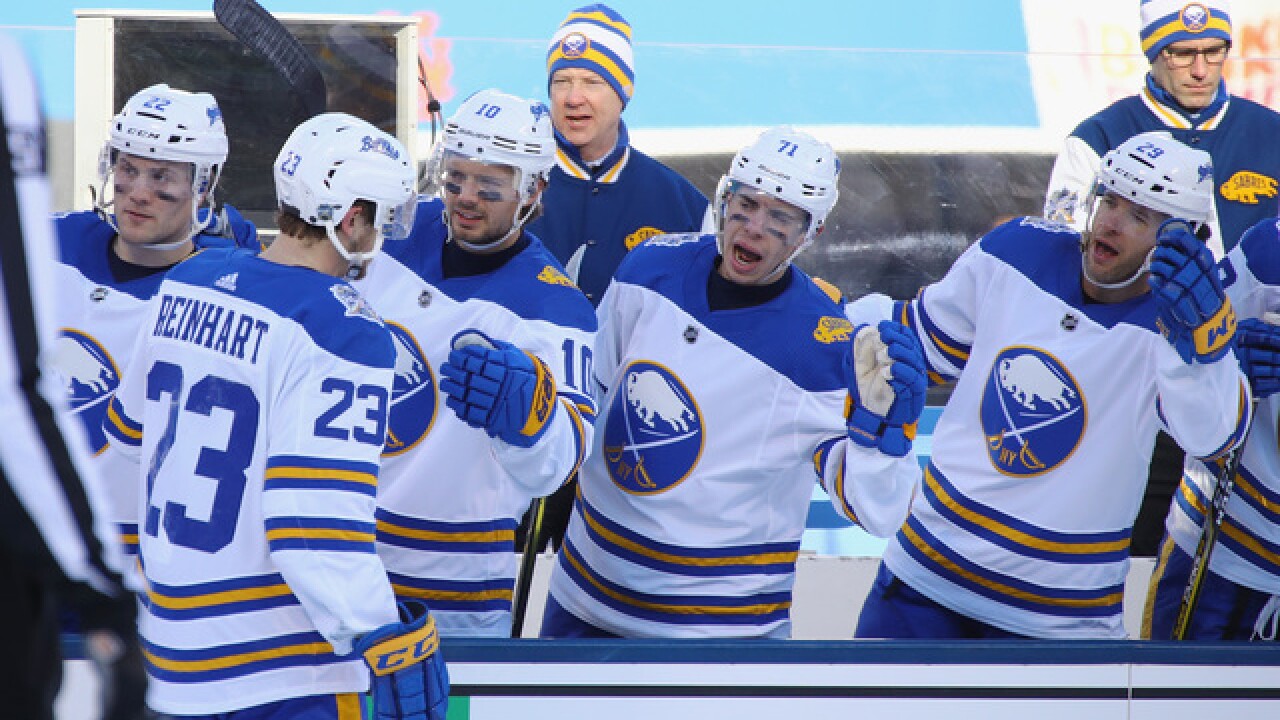 Copyright 2018 Scripps Media, Inc. All rights reserved. This material may not be published, broadcast, rewritten, or redistributed.
Bruce Bennett
<p>NEW YORK, NY - JANUARY 01: Sam Reinhart #23 of the Buffalo Sabres celebrates his second period goal with teammates during the 2018 Bridgestone NHL Winter Classic at Citi Field on January 1, 2018 in the Flushing neighborhood of the Queens borough of New York City. (Photo by Bruce Bennett/Getty Images)</p>

The more things change, the more they tend to stay the same.

After a summer filled with roster adjustments and front office modifications, many believed the Buffalo Sabres would take a step forward. Instead, they plummeted, putting together one of the most abysmal years in franchise history.

For the third time in five seasons, the Sabres finished with the worst record in the NHL. The basement-dwelling Sabres tallied 25 wins and 62 points in 82 games. For perspective, only four teams had fewer than 30 wins and no team had less than 28 [except the Sabres].

Buffalo found the back of the net less than any other team and were shut out on seven separate occasions. Defensively they were just as pitiful, allowing more goals than every team except the Ottawa Senators. Not the greatest combo if you ask me.

With another long offseason upon us, many fans are wondering what happens next. Changes are certainly coming, just don't expect any shakeups in the front office or behind the bench.

For those who have suggested that Housley will be let go after the season, this is for you. While we can never say never, it's hard to fathom that the Pegulas would cut Housley loose after one season. Regardless of how bad things were, the head coach can only control so much. Does he deserve some of the blame? Of course, but he's not the one who misses a wide-open net from point blank or allows an opponent to stand alone uncovered in front of the net.

Like Housley, first-year GM Jason Botterill also deserves another kick at the can. While he was underwhelming at the trade deadline, Botterill did a nice job getting both Will Borgen and Casey Mittelstadt signed. His offseason moves from last summer weren't great, but you have to wonder if Botterill knew this team was going to struggle.

As for the team itself, there will surely be plenty of changes.

Below are the players set to become unrestricted free agents on July 1st.

Aside from Nelson and perhaps Johnson as a returning backup, it's safe to say that everyone else on the aforementioned list will likely be playing elsewhere next season.

Reinhart will likely get the biggest contract out of the group of RFAs and will be one of the most intriguing storylines to follow in the offseason. After his second-half surge, resigning Reinhart is a priority for the Sabres, but only if the price is right. Reinhart and his agent will likely look for a longer deal while Botterill and the Sabres will fight for a shorter "bridge" deal. This is just a guess, but getting Reinhart for a three-year, $13.5M deal [with incentives added] seems like it would make sense for both sides.

Lehner for the second straight summer will be a restricted free-agent but this time around, I don't think it's a guarantee that he'll be back. Unless something changes, it appears Ullmark is the Sabres goaltender of the future, especially when you consider his contract.

For those of you locked-in on the NHL Draft, Buffalo will find out what pick they'll have on April 26th. At worst, the Sabres will own the fourth-overall pick.

Here's a handy breakdown of how the odds work:

Rasmus Dahlin is used to wearing blue and yellow -- landing the first-overall pick would be massive. But regardless of what happens, the Sabres will land a highly-skilled player.

We'll have a better idea what the Sabres and Botterill are thinking in the near future. The Sabres GM is expected to meet with reporters on Wednesday [4/11] for one last time as the season comes to an end.

To call the 2017-2018 disaster would be putting it lightly. Good news, there's always next year, or at least that's the glass-half-full way of looking at things.

***As always, thanks for following along with 7ABC this season, whether on-air or online. Here's to a great offseason!