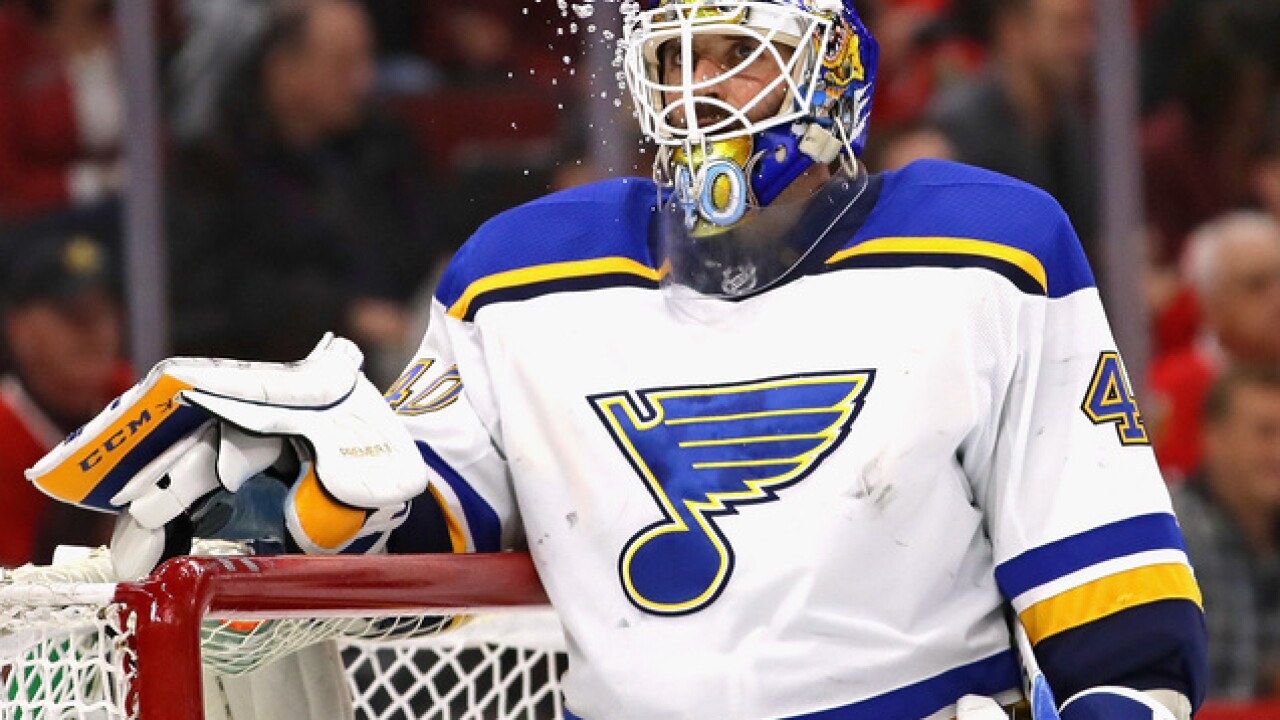 Copyright 2018 Scripps Media, Inc. All rights reserved. This material may not be published, broadcast, rewritten, or redistributed.
Jonathan Daniel
<p>CHICAGO, IL - APRIL 06: Carter Hutton #40 of the St. Louis Blues spits water during a break against the Chicago Blackhawks at the United Center on April 6, 2018 in Chicago, Illinois. The Blues defeated the Blackhawks 4-1. (Photo by Jonathan Daniel/Getty Images)</p>

For weeks the Buffalo Sabres have been linked to unrestricted free agent goaltender Carter Hutton. On Sunday the two sides made it official.

Wow, what a deal for the #Sabres if these numbers are correct. https://t.co/pykvxPnCli

The three-year deal for Hutton is worth an average of $2.75 million per season.

"With Buffalo, I was their guy and that gave me a lot of confidence in going in there and knowing I could go somewhere where they wanted me to succeed and you know I'm really excited to join a team like this," Hutton said Sunday. "We're ready to win and I'm excited to join and help out."

Hutton added that the #Sabres pushed hard from the start and his familiarity with Housley really helped his decision. He said six or seven teams reached out and expressed interest @NHLNetwork

"I just think they were close. I played them a few times over the last, three, four, five years and you know it's always kind of just a few missing pieces and I think now they are kind of becoming a whole team," Hutton added.

"Shoring up the back end here, getting the number one overall pick is amazing and I think Jack Eichel is becoming a superstar in the league, if not already. I think just adding a few more pieces and if you look back last year from doing my homework [they had] a few injuries here and there that obviously hurt them. I think moving forward that's something I think we can change next year and turn those one-goal losses into finding a way to win those games and I think that makes a big difference quickly."

Jason Botterill deserves some serious praise for this deal. For weeks I've said that I thought the addition of Hutton made sense, but only with a two-year deal.

While I don't think a third year is necessary -- it's hard to criticize the contract when Hutton's average salary is so much lower than initially expected. Frankly, I thought Hutton was going to get at least $4 million per season.

Instead, the Sabres get their new starting goaltender for less than $3 million per season, giving them plenty of flexibility with the rest of their roster. Over the years, Hutton has been a reliable backup that has stepped up and played well when given an opportunity.

Even if Hutton takes a small step back and his numbers slip in Buffalo, the Sabres are getting a reliable goaltender who can ideally start for at least a season while Linus Ullmark continues to develop. If Ullmark is ready to take over after next season, Hutton can be the familiar, reliable backup in the locker room. If Ullmark takes a little longer than expected, the Sabres will have a fringe starter on a very reasonable contract.