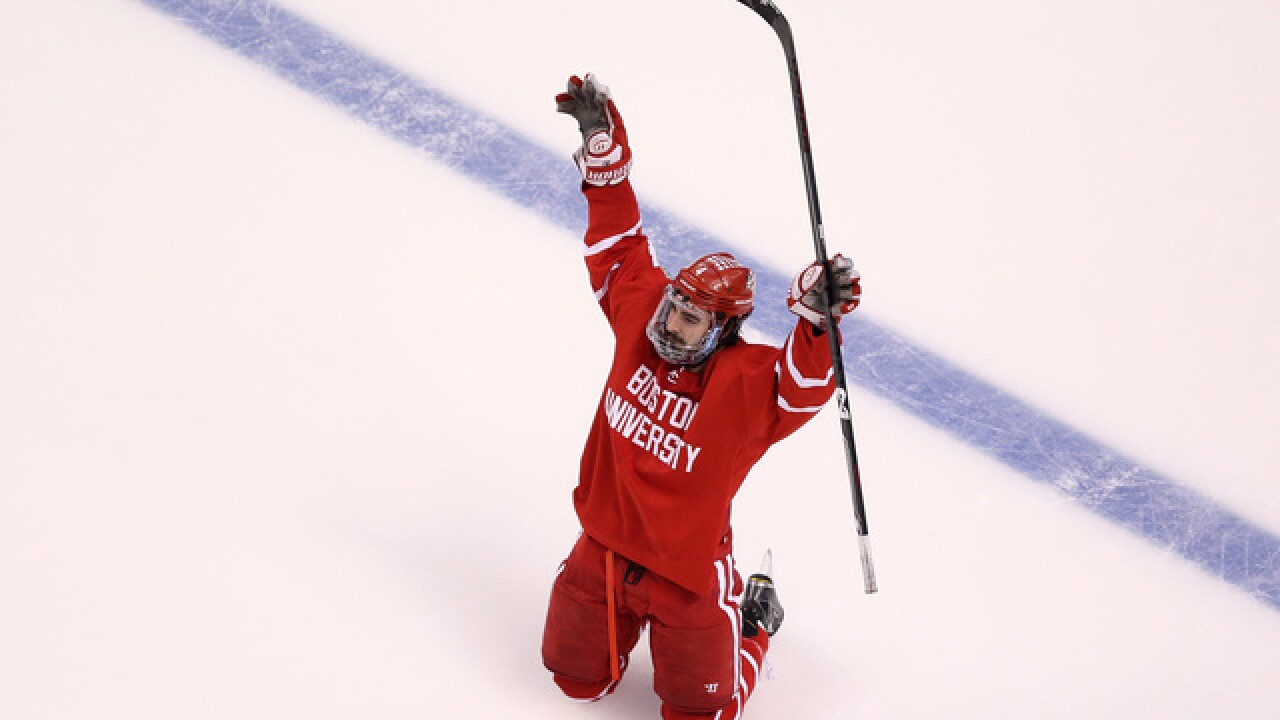 Copyright 2018 Scripps Media, Inc. All rights reserved. This material may not be published, broadcast, rewritten, or redistributed.
Mike Lawrie
<p>BOSTON, MA - APRIL 09: Brandon Hickey #4 of the Boston Terriers celebrates after scoring his team's second goal on a power play against North Dakota in the first period during the 2015 NCAA Division I Men's Hockey Championship semifinals at TD Garden on April 9, 2015 in Boston, Massachusetts. (Photo by Mike Lawrie/Getty Images)</p>

On Thursday the Buffalo Sabres made their first trade of the offseason, acquiring defenseman Brandon Hickey and winger Mike Sislo from the Arizona Coyotes in exchange for Hudson Fasching.

Hickey, 22, captained the Boston University Terriers this season, tallying 14 points in 35 games. Selected by Calgary in the third round of the 2014 NHL Draft, Hickey was traded to Arizona prior to last season.

Fasching appeared in only five games with the Sabres last season, failing to register a point. The 22-year-old winger spent the majority of the season in Rochester, scoring 30 points in 69 games.

Sislo, 30, spent last season with the Tucson Roadrunners of the AHL, registering 47 points in 68 games.

This feels the classic change of scenery trade, especially for Fasching. When Fasching was acquired in 2014, the Sabres were hoping the young forward could turn into a physically dominating bottom-six forward with offensive upside.

Over the years he's shown flashes but has often been inconsistent and underwhelming during his stints in the NHL. Arizona is surely hoping that at only 22-years-old, they can benefit from adding a big-bodied forward into their organization.

As for Hickey, he's never played a game in the AHL or NHL so he's a hard prospect to judge. A teammate of Jack Eichel, Evan Rodrigues, and Danny O'Regan while at Boston University, Hickey will certainly know plenty of players within the organization.

It's a low-risk move for the Sabres, who will hope Hickey can develop into an NHL defenseman. Chances are, he'll sign an entry-level deal in the near future and compete for a spot in Rochester to begin the year.