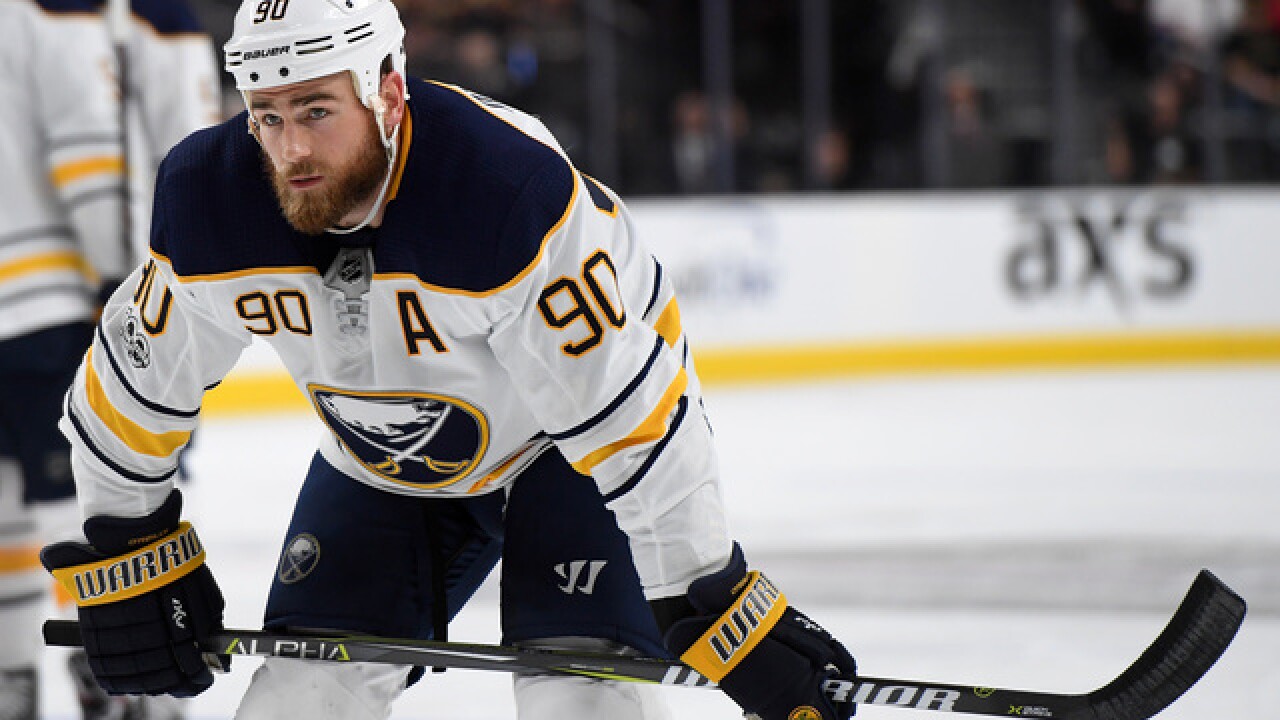 Copyright 2017 Scripps Media, Inc. All rights reserved. This material may not be published, broadcast, rewritten, or redistributed.
Ethan Miller
<p>LAS VEGAS, NV - OCTOBER 17: Ryan O'Reilly #90 of the Buffalo Sabres waits for a faceoff in the first period of a game against the Vegas Golden Knights at T-Mobile Arena on October 17, 2017 in Las Vegas, Nevada. The Golden Knights won 5-4 in overtime. (Photo by Ethan Miller/Getty Images)</p>

The Buffalo Sabres have traded Ryan O'Reilly to the St. Louis Blues.

"Ryan's gonna to go to a team that's really solidified their center ice position right now and from our perspective, we certainly liked trying to communicate with St. Louis. They've done a great job in drafting. They have some really good prospects that we were very interested in and from our standpoint, getting a first round pick, now putting us potentially with three first round picks next year was a big thing," General Manager Jason Botterill said in a conference call following the trade. "Obviously we're very excited about making the deal and I'm sure Doug [Armstrong] feels the same way and hopefully this is a deal that works out for both teams."

O'Reilly, 27, spent three seasons with the Sabres, scoring 61 points in 81 games last season. An assistant captain with the Sabres, O'Reilly has more points than every other Sabre than Jack Eichel during that stretch.

Thompson, 20, was selected by the Blues in the first round of the 2016 NHL Draft. In 41 games with the Blues last season, Thompson scored nine points in 41 games.

"We see a kid that has a great shot, great size, has a really good reach on the ice there, has played NHL games as a 20-year-old," Botterill said about Thompson. "We think he's gonna be able to step in our line-up and grow with our young centers."

"He comes in the league as a first round pick, has been in St. Louis his entire career, has played a lot of different roles -- power play, penalty killing, wing, center -- and I think that versatility is something that we were really intrigued by," Botterill said about Berglund.

"We felt there were some pieces for the future. We thought bringing in young players that can grow with our other young players who are part of our core and bringing in veteran players that can help those young players in situations," Botterill said. "We certainly want players such as Rasmus Dahlin and Casey Mittelstadt to play big roles but we also don't want them to be overwhelmed so that's why we were excited about making this trade here today."