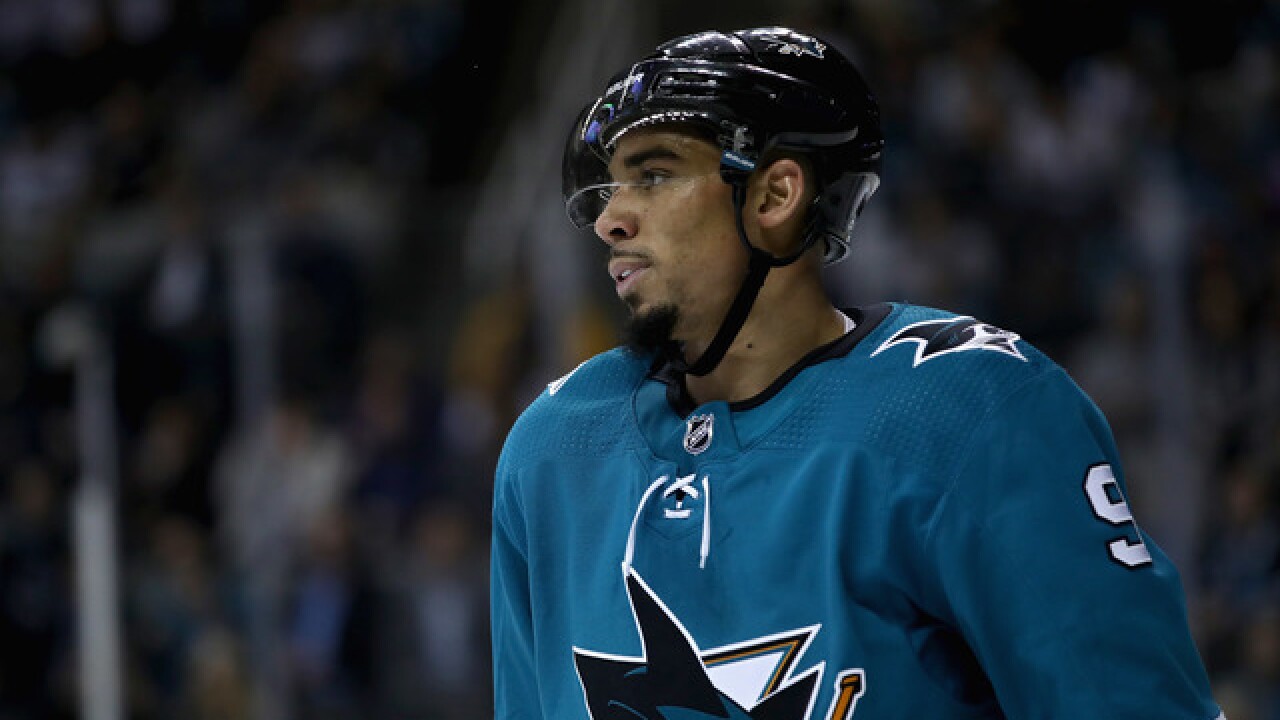 Copyright 2018 Scripps Media, Inc. All rights reserved. This material may not be published, broadcast, rewritten, or redistributed.
Ezra Shaw
<p>SAN JOSE, CA - MARCH 08: Evander Kane #9 of the San Jose Sharks skates on the ice during their game against the St. Louis Blues at SAP Center on March 8, 2018 in San Jose, California. (Photo by Ezra Shaw/Getty Images)</p>

Evander Kane is staying in San Jose, which is great news for his former team, the Buffalo Sabres.

Hearing the Sharks and Evander Kane have agreed to a long-term contract extension. Numbers may be in the 7-years 7-million per range.

On Thursday the Sharks announced that Kane has agreed to a seven-year deal. According to multiple reports, the deal is worth $49 million.

In February, Kane was sent to San Jose from Buffalo as part of a deadline day trade. In the deal, Buffalo received a conditional 2019 first-round pick from San Jose.  Buffalo would only receive a first-round pick if 1) Kane resigned with the Sharks or 2) San Jose won the Stanley Cup.

Buffalo is now owed a first-round pick from San Jose, rather than the second round pick they would've been sent if neither of the previously stated conditions were met. According to the Associated Press, the first-round pick is lottery protected, meaning if the Sharks miss the playoffs next season, the Sabres will be given their 2020 first-round pick.

Mittelsatadt, Dahlin and two first rounders in 2019? *nods head up and down* https://t.co/1cQmeUFWjy

This offseason keeps getting better for GM Jason Botterill and the Sabres.

In April Botterill found out his team would own the No. 1 pick in the upcoming draft and the chance to select consensus best player available Rasmus Dahlin. A few weeks later, Kane appears to be staying in San Jose, which will give the Sabres *another* first-round pick in the 2019 draft.

That is, of course, if Botterill doesn't decide to move the pick and use it to acquire a different prospect or player.

The Sabres need plenty of help and one of the best ways to turn around a struggling franchise is to hit on draft picks. While no pick a guarantee, the more picks a team has, the more likely they are to find a player who can help the organization.

Unless they take a step back, the Sharks will likely be sending the Sabres a late first-round pick next season. But it's certainly better than the late second-round pick they would have been sent if Kane signed elsewhere.

If nothing else, this is another valuable asset to a team that has already had a very promising, albeit early, offseason.