Is it time for the Buffalo Sabres to trade Sam Reinhart? 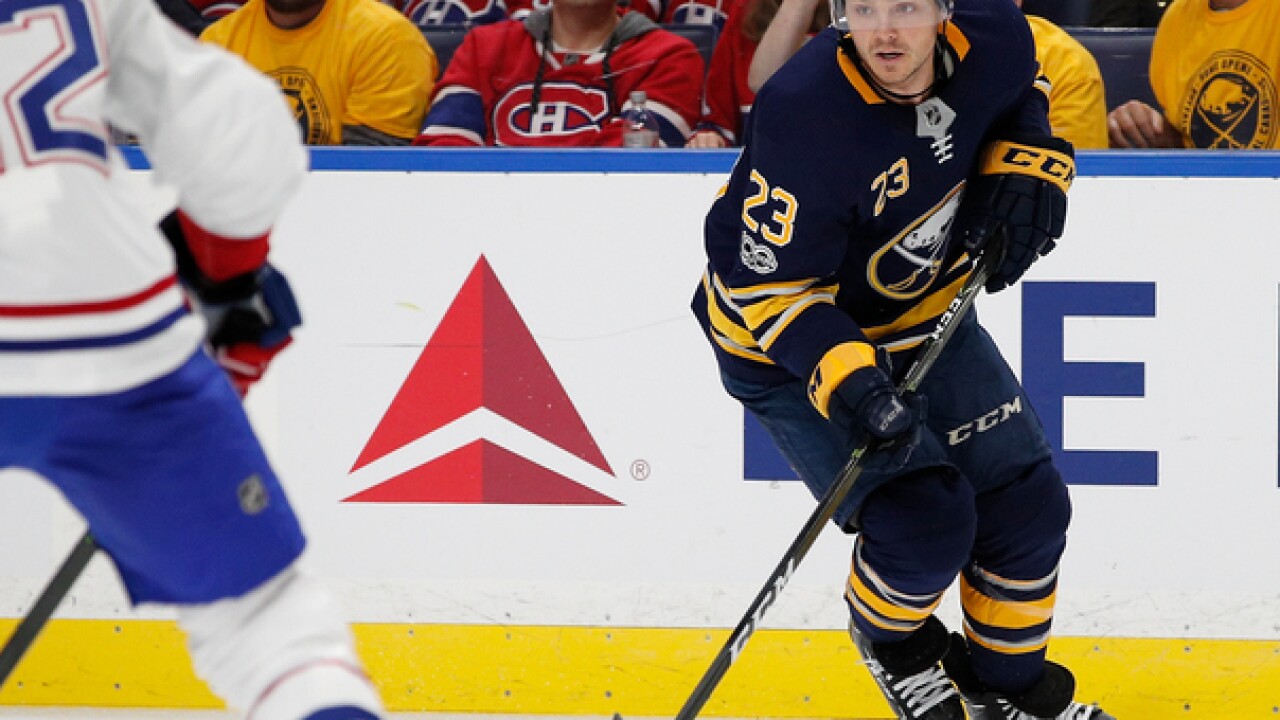 Copyright 2018 Scripps Media, Inc. All rights reserved. This material may not be published, broadcast, rewritten, or redistributed.
Kevin Hoffman
<p>BUFFALO, NY - OCTOBER 5: Sam Reinhart #23 of the Buffalo Sabres with the puck during the second period against the Montreal Canadiens at the KeyBank Center on October 5, 2017 in Buffalo, New York. (Photo by Kevin Hoffman/Getty Images)</p>

There is no player more interesting on the Buffalo Sabres roster than Reinhart. After an abysmal start to the season, Reinhart is finally playing to his potential and producing at an alarming rate.

In the Sabres last 13 games, Reinhart has six goals and ten assists, good for a team-best 16 points over that span. It's arguably Reinhart's best hockey of his three-year NHL career which has plenty of fans wondering -- is now the time to trade Reinhart?

It's a valid question for a player set to become a restricted free agent in the summer. This season Reinhart has stood out for the wrong reasons more often than he's been noticed for what he's done well. Up until his recent hot streak Reinhart had only 13 points in 44 games. It's crazy to think that after this recent tear Reinhart still has only 29 points in 57 games this season.

Sam Reinhart has 16 points in 13 games. This is fine #Sabres @WKBW pic.twitter.com/epqwuj5CrY

His struggles were most evident in a 3-0 loss to the Boston Bruins on December 19. Reinhart logged only 2:05 of ice time in the third period as the Sabres tried to mount a comeback. After the game, Sabres head coach Phil Housley was critical of the former second-overall pick and said he needed to earn his ice time.

Fast forward to Tuesday's win against the Tampa Bay Lightning. A lot has changed with injuries to key players but Reinhart had more minutes than every forward in the lineup not named Ryan O'Reilly.

"I think there is more urgency," Housley said about Reinhart on Wednesday. "I think confidence has a lot to do with it. Obviously, everybody's start was a little bit slow but he has slowly built himself into a very dangerous forward for our team and I think that goes with urgency and battle. To win those battles, going to the net, paying the price to score goals and I like that he's brought more speed to his game."

As Uncle Ben told Peter, with great power comes great responsibility. With his roommate and bicycle buddy out of the lineup, Reinhart has earned extra minutes and doesn't look like he'll cool off anytime soon. Since the tear started, Reinhart has insisted that he's done nothing different than when he was struggling.

So why shouldn't the Sabres trade him when his value is soaring? There is no way Reinhart can keep this up, right?

When Reinhart is playing his best he is cleaning up the garbage around the blue paint and causing havoc in front of the net. In today's NHL players who can do that are very valuable.

He's certainly not the fastest player and won't beat many goaltenders with his shot. But what he can do is spread the puck around to his teammates and protect the puck behind the net.

Let's say he cools off and finishes this season with around 40 points. That's certainly not good enough but everyone has a down year once in a while. As hard as it may be, try forgetting that he was a second-overall pick and think of him as a young player that will likely have three seasons with more than 40 points before his 23rd birthday.

You'd have to think most of the teams calling on Reinhart would be contenders, meaning they'll likely end up with a late first round pick. For some perspective, here are the last ten players selected in the first round of the 2014 NHL Draft (year Reinhart was drafted).

Some solid players for sure, but aside from Pastrnak, is there anyone you would rather have than Reinhart?

In the offseason, it's not ridiculous to think the Sabres can resign Reinhart to a bridge deal worth $3 or $4 million a season. At his age that contract could prove to be a steal and also gives him a few more years to develop. Sometimes it just takes a little bit longer -- not everyone is Jack Eichel or Patrick Laine.

Giving up or trading Reinhart seems premature unless the Sabres get an offer they can't refuse. Jason Botterill should absolutely listen to calls on Reinhart, but if, and only if, it's a great deal.