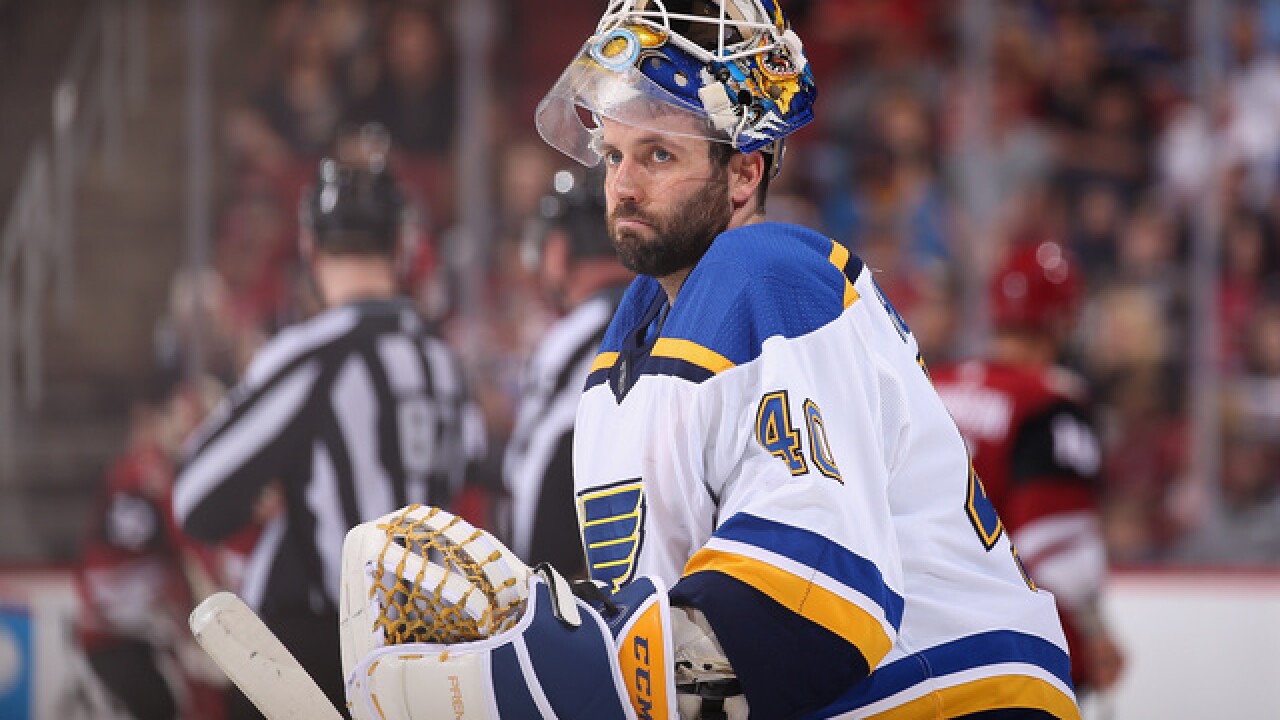 Copyright 2018 Scripps Media, Inc. All rights reserved. This material may not be published, broadcast, rewritten, or redistributed.
Christian Petersen
<p>GLENDALE, AZ - MARCH 31: Goaltender Carter Hutton #40 of the St. Louis Blues skates back to the net during a break from the third period of the NHL game against the Arizona Coyotes at Gila River Arena on March 31, 2018 in Glendale, Arizona. (Photo by Christian Petersen/Getty Images)</p>

Newly signed Sabres goaltender Carter Hutton received interest from more than a half dozen teams but decided Buffalo was the place to be.

"With Buffalo, I was their guy and that gave me a lot of confidence in going in there and knowing I could go somewhere where they wanted me to succeed and you know I'm really excited to join a team like this," Hutton said Sunday. "We're ready to win and I'm excited to join and help out."

Hutton is coming off his best season in the NHL, where he posted an impressive 17-7-3 record, along with a 2.09 goals against average and a .931 percentage. During his most recent stints in St. Louis and Nashville, Hutton has been primarily a backup goaltender on successful teams. In Buffalo, he's expecting a big workload, at least early on.

"I think my role is to come in here, step in, play well and help the team win hockey games right away."

Hutton, who turns 33 in December, added that part of his role with the Sabres will be to develop and mentor highly-touted prospect Linus Ullmark.

"What's been expressed to me is I think they kind of want to protect him [Linus Ullmark] in the sense that this is going to be a big year for him, he's a young kid coming up. Playing full-time in the NHL is a lot different than playing full-time in the AHL. I just think they don't want to make any mistakes rushing him. They know he's their guy in the future and they have a lot of faith in him."

As for his decision to join the Sabres, Hutton believes the team is ready to turn a corner and take a big step in the right direction.

"I just think they were close. I played them a few times over the last, three, four, five years and you know it's always kind of just a few missing pieces and I think now they are kind of becoming a whole team," Hutton added.

"Shoring up the back end here, getting the number one overall pick is amazing and I think Jack Eichel is becoming a superstar in the league, if not already. I think just adding a few more pieces and if you look back last year from doing my homework [they had] a few injuries here and there that obviously hurt them. I think moving forward that's something I think we can change next year and turn those one-goal losses into finding a way to win those games and I think that makes a big difference quickly."

And fear not Sabres fans -- When asked about playing against newly signed John Tavares and the Maple Leafs -- Hutton joked he's undefeated against Toronto and he's hoping to keep that up.