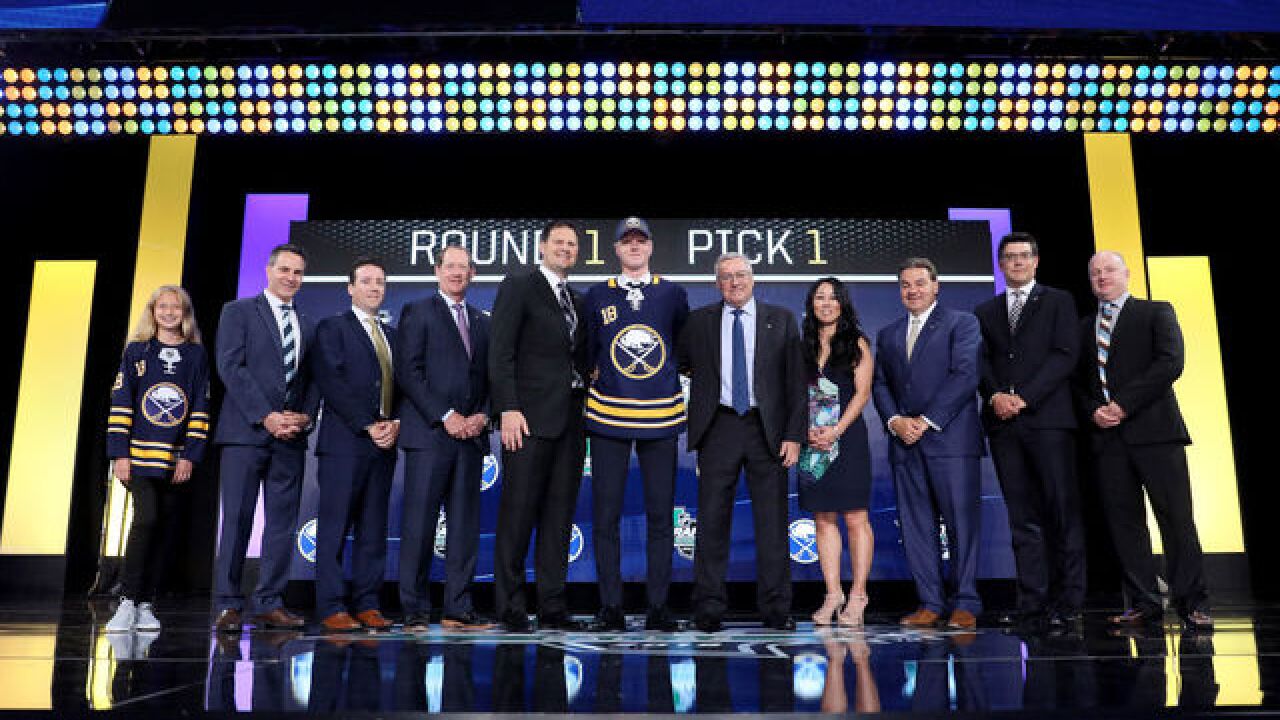 Copyright 2018 Scripps Media, Inc. All rights reserved. This material may not be published, broadcast, rewritten, or redistributed.
Bruce Bennett
<p>DALLAS, TX - JUNE 22: Rasmus Dahlin poses after being selected first overall by the Buffalo Sabres during the first round of the 2018 NHL Draft at American Airlines Center on June 22, 2018 in Dallas, Texas. (Photo by Bruce Bennett/Getty Images)</p>

At long last, Rasmus Dahlin is officially a member of the Buffalo Sabres. On Friday at the NHL Draft in Dallas, the moment Sabres fans have been waiting for finally happened just after 7 p.m. when general manager Jason Botterill announced the pick that surprised no one.

Dahlin, 18, has been called one of the most polished defensive prospects in years, if not decades. The Swedish standout first burst onto the scene as a 16-year-old, becoming the youngest player to appear in the IIHF World Junior Hockey Championships for Sweden.

Rasmus Dahlin says he likes the small town feel of Buffalo because it reminds him of his hometown in Sweden #Sabres @WKBW pic.twitter.com/MaPBa6usWR

"He's pretty much a complete package on and off the ice," Dan Marr, Director of NHL Central Scouting told 7ABC. "He's got the skills and attributes to be considered the best player available for this draft, but it's the intangibles that go along with it. His character, his work ethic, his commitment, his leadership skills. I think that's what impresses the teams the most."

While not making it seem like his landing spot was a foregone conclusion, Dahlin admitted while in Buffalo for the NHL combine, he would be happy to play for the Sabres.

"If I’m coming here then I would love to be here," Dahlin said in early June. "Great fans and everybody loves hockey so it seems like Buffalo is a great city."

Dahlin becomes the third No. 1 pick in Sabres history, joining Gilbert Perreault [1970] and Pierre Turgeon [1987] and is only the second Swede to be selected first-overall [Mats Sundin, 1989]. Certainly not a bad group of players to be linked to.

It can't be overstated how significant the addition of Rasmus Dahlin will be to the Buffalo Sabres. For decades, the Sabres have been without a true No. 1 defenseman who can log big minutes and contribute offensively.

Dahlin projects to be a player that can do both, who will surely make the jump into the NHL next season as an 18-year-old.

Not only will Dahlin inject the Sabres blue line with some serious talent. But he'll take some of the pressure off players like Rasmus Ristolainen and Marco Scandella, who were overworked for much of last season.

McKenzie on Rasmus Dahlin: "Whether it is Hedman, Karlsson or Lidstrom, none of them did the things at age 17, 18 that he has. Figure it out from there."

Don't immediately expect Dahlin to play 28 minutes a night and score 70 points every season. For some perspective, here are some of the numbers from other highly-touted defensive prospects during their rookie seasons.

Moral of the story -- be patient. Chances are, Dahlin will one day be one of the best defensemen in the NHL. But if it doesn't happen right away, there is no reason to panic.

In the near future, we'll get our first look at Dahlin on the ice at Sabres Development Camp. From there, Dahlin will continue his offseason workouts until training camp in August/September.

While adding the Swedish sensation won't fix all the Sabres problems, it's certainly a start and a great one at that.