Do the Sabres have a realistic shot at landing John Tavares? 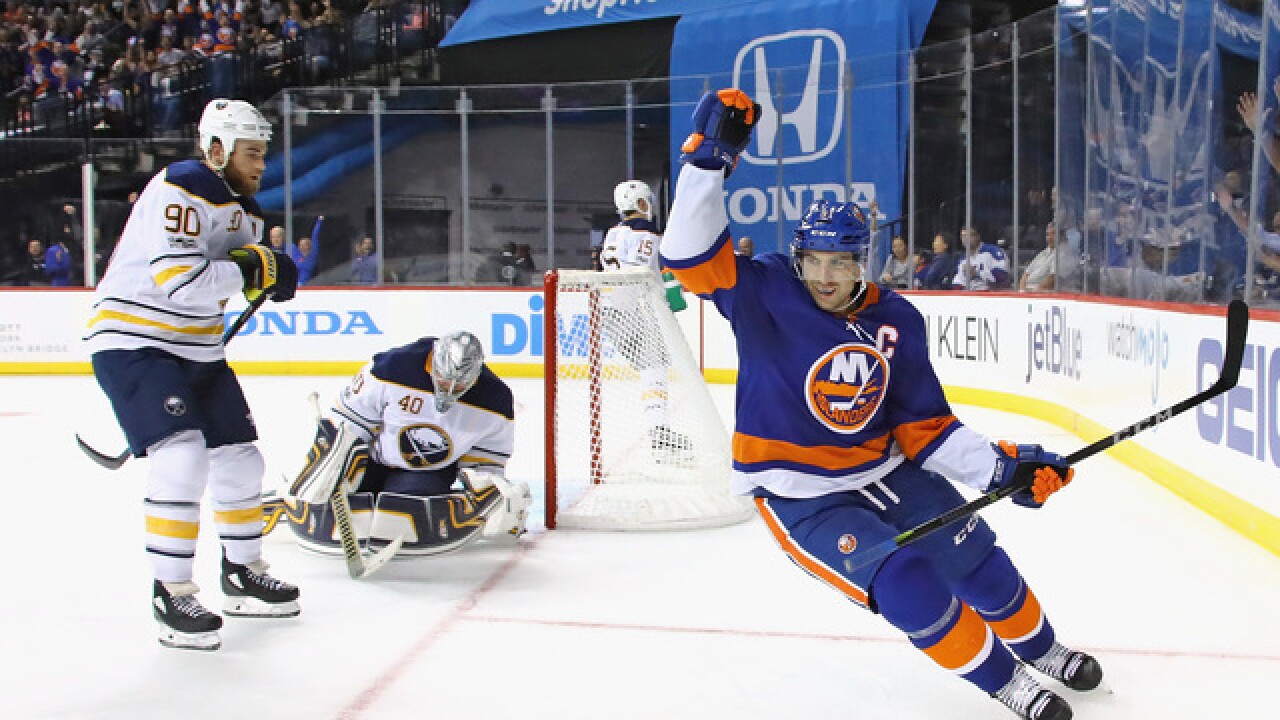 Copyright 2018 Scripps Media, Inc. All rights reserved. This material may not be published, broadcast, rewritten, or redistributed.
Bruce Bennett
<p>NEW YORK, NY - OCTOBER 07: John Tavares #91 of the New York Islanders scores a shorthanded goal at 5:13 of the second period against the Buffalo Sabres at the Barclays Center on October 7, 2017 in the Brooklyn borough of New York City. (Photo by Bruce Bennett/Getty Images)</p>

On Wednesday, TSN announcer Gord Miller appeared on Montreal radio show 'Melnick in the Afternoon' and brought up the Buffalo Sabres as a potential landing spot for John Tavares.

"I've started talking to NHL people since the lottery. I think this makes Buffalo a legitimate contender to land John Tavares," Miller told TSN 690. "If Tavares wants to win, that's his number one thing, he wants to win and he wants to play in a hockey market, well Buffalo is a good hockey market."

"Now you've got Rasmus Dahlin coming, they've already got Ristolainen, they've got Eichel, they've got an owner willing to spend money, it's close to home but it's not in Toronto with all the scrutiny, his uncle John played lacrosse in Buffalo for years and is a legend there," Miller added. "All of a sudden with Buffalo winning the draft lottery, they look like a team players would want to play for."

After connecting the dots between Tavares and the Sabres, Miller was asked about the future of Ryan O'Reilly. The Sabres alternate captain has been involved in plenty of trade rumors since his end of the season interview with reporters in Buffalo.

"The thing with O'Reilly, he was just so honest," Miller said. "I have no problem with what he said, none whatsoever. Any player that says losing doesn't get them down is lying. It's soul defeating. Losing is souls defeating."

Miller went on to say that if the Sabres add Tavares, it would likely impact O'Reilly's future in Buffalo.

"Yeah, if you sign Tavares, you might have to move O'Reilly out, sure," Miller added. " I think on a good team, Ryan O'Reilly is a really really valuable player. You know, the issue with him, like a lot of guys, is money. You love the player but do you love the money? That's the question?"

Listen to the full interview here:

It took until May 16th for our first juicy rumor of the offseason.

To be clear, Miller isn't saying that he's hearing the Sabres will sign Tavares, he's saying they are a contender, along with some other teams.

As he mentions during the interview, Tavares has plenty of connections to Buffalo. Most obviously, his uncle John Tavares is the most beloved lacrosse player in Buffalo Bandits history. Johnny Who?!

Tavares is also very close with current Sabres alternate captain Kyle Okposo, along with Matt Moulson. And then there's the proximity to home. A native of Mississauga Ontario, Tavares would be incredibly close to home if he chose to play for the Sabres. 86 miles according to Google Maps, to be exact.

Does signing Tavares seem like a good idea? Well of course it does, but only if the Sabres can make smart corresponding moves.

Tavares will likely sign a deal somewhere in the $10M per season ballpark, $2.5M more than what O'Reilly currently makes. Even if the Sabres move O'Reilly, they'll have to make a few more moves. They would likely target a top-six winger to line up with Tavares or Jack Eichel in exchange for O'Reilly, but chances are that player will also have a decently large salary.

Keep in mind, Sam Reinhart also needs a new deal and in a few years, if everything goes according to plan, Rasmus Dahlin is going to get a ton of money.

That said, it's hard not to like a team that has Tavares, Eichel and Casey Mittelstadt down the middle with Rasmus Dahlin on the blue line.