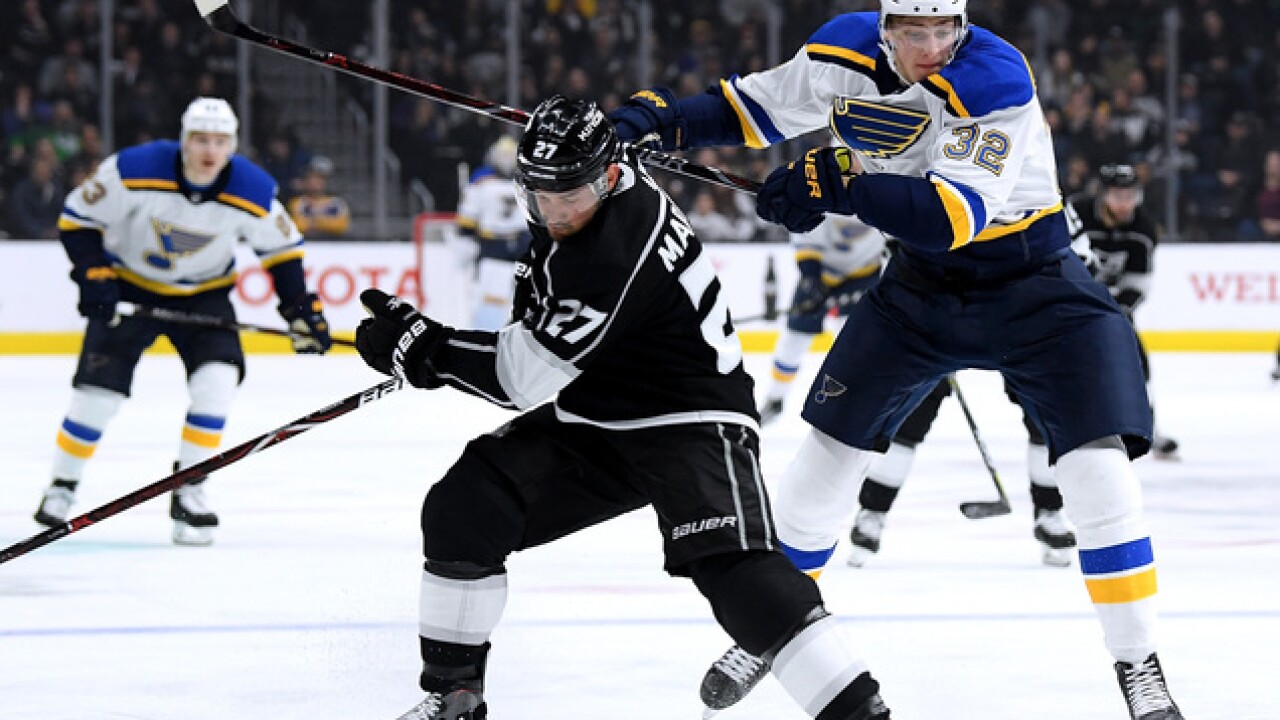 Copyright 2018 Scripps Media, Inc. All rights reserved. This material may not be published, broadcast, rewritten, or redistributed.
Harry How
<p>LOS ANGELES, CA - MARCH 10: Tage Thompson #32 of the St. Louis Blues takes a check from Alec Martinez #27 of the Los Angeles Kings during the tihrd period at Staples Center on March 10, 2018 in Los Angeles, California. (Photo by Harry How/Getty Images)</p>

When Jason Botterill said the Buffalo Sabres needed a major shakeup, he wasn't kidding. But how will the recent roster moves look on opening night? It's too early to tell but let's take a guess, shall we?

Acquired last week from the Pittsburgh Penguins, Conor Sheary is used to playing with elite players. Lining up on the left with Jack Eichel, Sheary will bring some desperately needed speed to the Sabres lineup. Sheary isn't a prototypical top-line winger, but he'll almost immediately become one of the most talented players Eichel has played with while in Buffalo.

On the right side of the top line, Sam Reinhart, who was one of the most productive players in the NHL during the second half of last season. I'd imagine Reinhart can be signed to a two or three-year bridge deal, with an average salary between $4M and $5M per season.

You don't need to tell me --- this is a pretty below average 'second' line. During their careers, both Sobotka and Berglund have thrived in bottom-six roles. With the Sabres, at least next season, they'll need to play on the second line while the Sabres continue to develop some of their younger players. If nothing else, this trio should be able to play tough minutes against skilled players while still having some offensive upside. Not a ton, but at least some.

Good news Sabres fans -- this has the potential to be a pretty exciting 'third' line. The quotes around third are because this line will play just as significant of a role as the aforementioned trio.

Mittelstadt absolutely has the skill and potential to one day become a very good top-six forward in the NHL, it just may take time. Limiting his minutes and responsibility seems like the right thing to do, at least next season.

As for Rodrigues, he's the versatile player on this line who can contribute at both ends of the ice.

By all accounts, Thompson has an exceptional shot and can thrive if he plays with someone who can create space and make plays. Mittelstdt can certainly do that. Pairing the Sabres newest prospect with one of their most coveted makes sense if Thompson has a strong training camp/preseason. If he doesn't impress, Thompson can start the season in Rochester.

Wilson won't wow anyone with his offensive production but he's a very dependable two-way player who should get a new contract in the offseason. Girgensons and Pominville both underperformed for much of last season but there isn't much the Sabres can do.

It has been decades since the Sabres had a franchise defenseman, and while Dahlin is still an 18-year-old kid, you would be hard-pressed to find someone who doesn't believe he'll become one of the best defenders in the league.

Nelson had a short but impressive stint with the Sabres last season, scoring three goals and adding five assists in 37 games. As the season carried along he continued to improve, earning a two-year contract extension in May ($812,500 per). Hunwick has plenty of NHL experience and if the injury bug bites, Hunwick can easily slide into the lineup.

For weeks leading up to free agency, the Sabres were linked to Hutton and just minutes after noon on July 1, the Sabres made it official. Hutton isn't a proven starter in the league but is coming off an incredible season.

After a strong start to last season earning AHL All-Star honors, Ullmark regressed and struggled after suffering a concussion. In the playoffs, Ullmark allowed 16 goals in three games with Rochester.  Giving Ullmark 30 games next seasons would be ideal for his continued development.