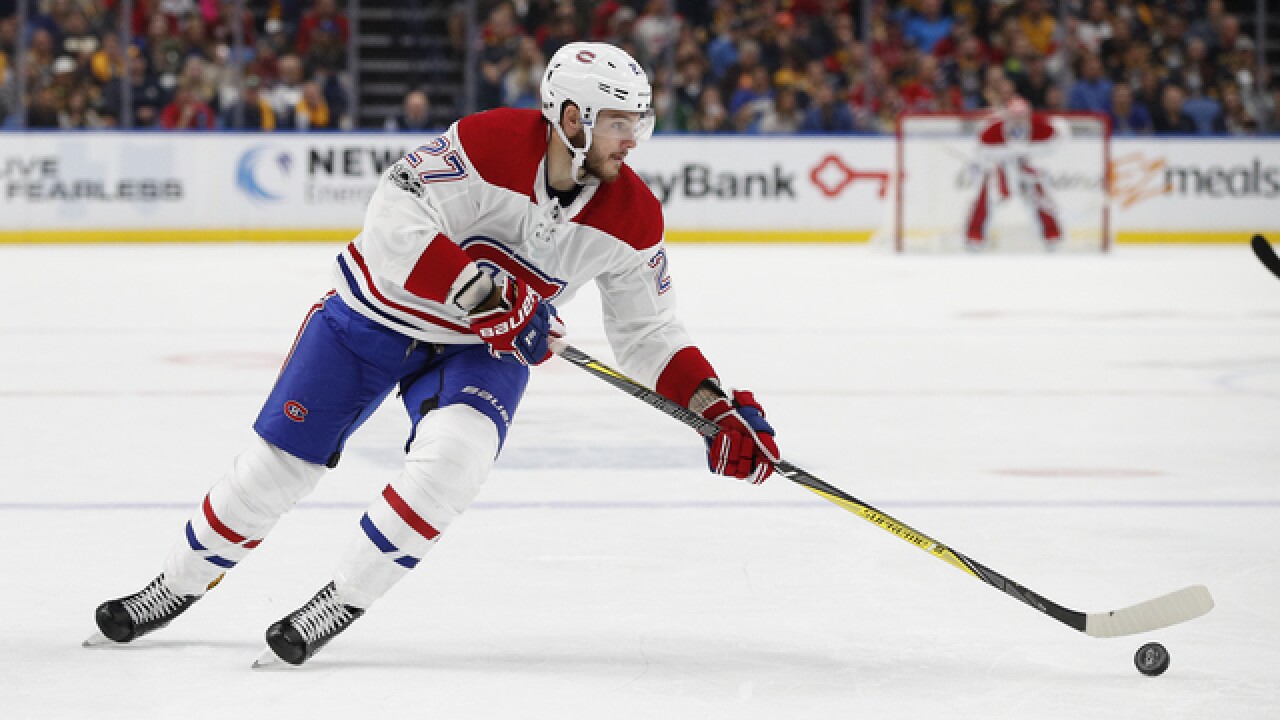 Copyright 2018 Scripps Media, Inc. All rights reserved. This material may not be published, broadcast, rewritten, or redistributed.
Kevin Hoffman
<p>BUFFALO, NY - OCTOBER 5: Alex Galchenyuk #27 of the Montreal Canadiens during the game against the Buffalo Sabres at the KeyBank Center on October 5, 2017 in Buffalo, New York. (Photo by Kevin Hoffman/Getty Images)</p>

With the NHL Draft two weeks away and rumors swirling, now seems like the perfect time for our second way too early roster projection of the offseason. Before you start searching for your pitchforks, please remember that I'm not the general manager of the Buffalo Sabres. These deals haven't actually happened, and chances are, they won't. But with the draft around the corner, it's always fun to throw some names and line combinations together.

*Gary Bettman voice* -- We have a trade

*Omar White, a contributor for Fansided, first pitched a similar trade proposal involving the Canadiens and O'Reilly. After thinking about it, I thought the deal made a lot of sense*

LeBrun: "Buffalo is taking a ton of calls, obviously mostly on Ryan O'Reilly, but people are calling on Ristolainen - who they don't want to move. But again, it's one of those things where people keep calling." #Sabres

According to multiple reports, Ryan O'Reilly is the player the Sabres are most likely to move in the offseason. At $7.5M per season, O'Reilly carries a pretty hefty cap hit but is also an extremely valuable asset. One of the rumored teams interested in O'Reilly's services is the Montreal Canadiens. Trading such an important player like O'Reilly within the division is certainly risky but crazier things have happened.

O'Reilly is an important piece to the Sabres roster but in a few years he may end up being the No. 3 center on the roster. While that would be a great problem to have, not many teams would be thrilled paying their third center more than $7 million per season, especially with such big holes at other parts of the roster.

Pierre Lebrun says Montréal is among the teams with interest in Ryan O’Reilly.

They hold the #3 pick

With a shakeup likely coming to the Sabres in some capacity, adding a young winger to play alongside Jack Eichel could pay dividends. While in Montreal, Galchenyuk has been moved all over the place. At just 24-years-old, Galchenyuk has underperformed for a former third-overall pick but he's still a talented player. In addition to Galchenyuk, the Sabres add two players with upside in Nikita Scherbak & Noah Juulsen.

Scherbak, a 2016 first-round pick, played in 26 games with the Canadiens last season, scoring four goals and adding two assists. While his NHL production hasn't jumped off the stat sheet, he's been a very productive player in the AHL. With the Sabres lack of prospects down the wing, adding Scherbak could be a nice move.

Juulsen, a 2015 first-round pick, played 23 games with Montreal last season, scoring one goal and adding two assists. A 6'2" right-shot defenseman, projects to be a top-four defender in the NHL.

Keep in mind, some of you will think the Sabres aren't getting enough of a return for O'Reilly. Others will think the Canadiens are giving up way too much. Just remember, it's hard to find young top-six centers outside of free agency. More often than not it requires a good player to get a good player. In this case, Jason Botterill is acquiring a trio of players with upside while Marc Bergevin and the Habs are adding one of the most reliable two-way centers in the NHL.

Now let's get to how the lines shake out after the Sabres big offseason move:

As it currently stands, left wing might be the weakest position on the Sabres roster. With the addition of Galchenyuk, the Sabres immediately add a scoring threat to play alongside Eichel, who has often been paired with players not deserving to be on the top line. Last season, Galchenyuk scored 19 goals and added 32 assists in 82 games played. With Eichel down the middle, Galchenyuk would have the luxury of playing with one of the best playmakers in the league. As for Eichel, he gets to play alongside someone who has proven they can convert on quality scoring chances.

On the right side of the top line, Sam Reinhart, who was one of the most productive players in the NHL during the second half of last season. I'd imagine Reinhart can be signed to a two or three-year bridge deal, with an average salary between $4M and $5M per season.

Smith immediately getting penciled in on the second line is an indication of how weak the Sabres truly are at left wing. While players like James van Riemsdyk and James Neal are intriguing free-agent options, both are going to get PAID. Smith had a strong season in the AHL, tallying 44 points in 57 games. It's certainly no guarantee that his game will translate to the NHL level, but with a strong training camp, he'll likely get a shot to start the year in Buffalo.

Olofsson is coming off a huge season in Sweden and will likely need some time to develop his game in North America. But the Sabres should certainly be excited about adding a pure goal scorer.

Just like the aforementioned van Riemsdyk and Neal, Paul Statsny will also get a big contract in the offseason after a strong playoff run with the Winnipeg Jets. His services will be desired by plenty of teams but at 32-years-old, this could very likely be his last big contract. With a ton of cap space available, the Sabres could try and snag Statsny to a three-year deal worth anywhere from $5M to $6M per season. While that's certainly a lot to pay a player who appears to be a bit past his prime, it gives the Sabres flexibility to have his contract expire at the same time Dahlin's new contract kicks in [if all goes according to plan].

Adding Statsny allows Mittelstadt to properly develop at either wing or on the third line. Throwing the 19-year-old at center on the second line seems short-sighted, especially for a GM like Botterill who has preached development.

Mittelstadt absolutely has the skill and potential to one day become a very good top-six forward in the NHL, it just may take time. Depending on what happens with O'Reilly, I wouldn't be shocked if the Sabres eased Mittelstadt into the season and put him on the wing.

Nylander is coming off another lackluster season in the AHL with Rochester and didn't really stand out in his end of the year stint with the Sabres. That said, if Nylander isn't ready to make the Sabres out of training camp after two years in the AHL, the Sabres could be in serious trouble. Some players take longer to develop and for the Sabres hopefully that's the case with Nylander.

Wilson won't wow anyone with his offensive production but he's a very dependable two-way player who should get a new contract in the offseason. Girgensons and Pominville both underperformed for much of last season but there isn't much the Sabres can do.

The significance of the Sabres winning the NHL Draft lottery and landing the No. 1 pick in the upcoming draft can't be overstated. It has been decades since the Sabres had a franchise defenseman, and while Dahlin is still an 18-year-old kid, you would be hard-pressed to find someone who doesn't believe he'll become one of the best defenders in the league.

Nelson had a short but impressive stint with the Sabres last season, scoring three goals and adding five assists in 37 games. As the season carried along he continued to improve, earning a two-year contract extension in May ($812,500 per). Pilut is a wild card, just like Victor Antipin was last season. Sabres assistant general manager Steve Greeley told WGR 550 he thinks Pilut can quickly adjust to the NHL game, similarly to a college senior making the jump from college to the pros.

One of the top goaltenders available in free agency, Bernier could prove to be a smart addition if the Sabres move on from Robin Lehner. Appearing in 37 games last season, the Sabres could hope for a similar workload next season to split time and create a true competition with Linus Ullmark. At 29-years-old, Bernier should have plenty of gas left in the tank and likely won't break the bank. Last season with the Colorado Avalanche,  Bernier made $2.75M.

At his year-end press conference, Sabres GM Jason Botterill told reporters Ullmark would be in Buffalo next season. Barring a massive surprise, Ullmark will likely get a shot to at the very least to split time with whatever other goaltender is on the roster. After a strong start to his season earning AHL All-Star honors, Ullmark regressed and struggled after suffering a concussion. In the playoffs, Ullmark allowed 16 goals in three games with Rochester.