5 options for the Sabres with the No. 32 pick 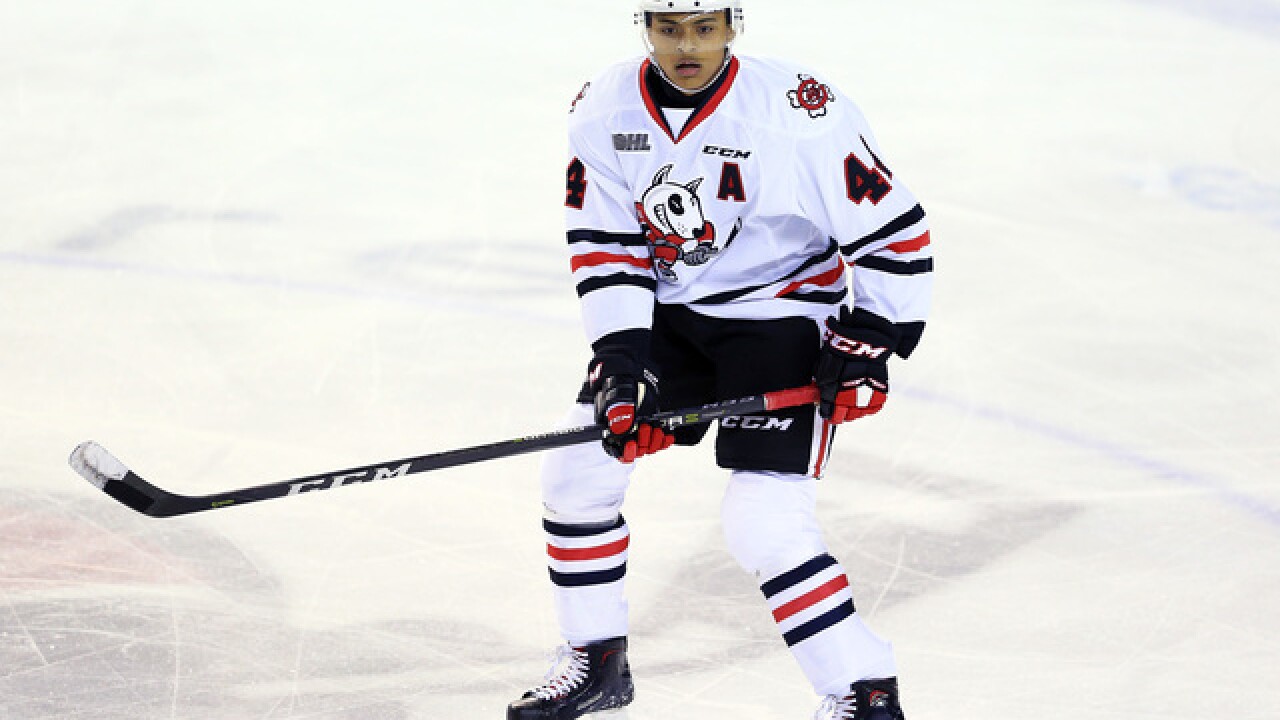 Copyright 2018 Scripps Media, Inc. All rights reserved. This material may not be published, broadcast, rewritten, or redistributed.
Vaughn Ridley
<p>ST CATHARINES, ON - OCTOBER 26: Akil Thomas #44 of the Niagara IceDogs skates during an OHL game against the Oshawa Generals at the Meridian Centre on October 26, 2017 in St Catharines, Ontario, Canada. (Photo by Vaughn Ridley/Getty Images)</p>

We all knew who the Sabres would take with the No. 1 pick.

The same can't be said for what they'll do with the first pick of the second round on Saturday [No. 32].

Jason Botterill is confident his team will add a solid player with the 32nd pick. Assuming, of course, he doesn't trade it #Sabres @WKBW pic.twitter.com/6W7SgHV2pr

With plenty of talented players available, the Sabres will have to decide whether they want to continue to bolster the blue line or add someone who can put the puck in the back of the net.

Here are five players the Sabres should consider with their first pick on Saturday morning:

Wilde has all the physical traits scouts and GM's desire. But according to experts, he often makes inexcusable mistakes. Some believe with a little time and effort, Wilde can become a solid defender in the NHL. Others believe he could likely end up a bust. At 32, he may be worth the risk.

*For what it's worth, this would be my pick*

Just look at his size. At 6'5", Noel doesn't play like your typical power forward. A speedy-forward who can play responsibly at both ends of the ice, Noel saw his production more than double last season. After a mediocre year with Oshawa in 2016-2017, Noel tallied 53 points in 62 games with the Generals last season. With the recent departure of Hudson Fasching, Sabres fans may not be excited about the possibility of adding a big-bodied forward. But Noel's speed and ability to finish should excite fans.

"I think I'm a two-way playmaker." #NHLDraft prospect Akil Thomas brings a different kind of savvy off the ice as well. pic.twitter.com/AewYCMGIxF

While with the Niagara Ice Dogs in the OHL right over the border, Thomas turned some heads. After posting 81 points in 68 games, Thomas climbed up draft boards and finished as the 15th ranked North American Skater according to NHL Central Scouting.

You want speed? McLeod has serious speed and some quick hands to match. With the Steelheads,  McLeod posted an impressive 70 points in 68 games. That said, some scouts are concerned about McLeod's hockey IQ and ability to process plays. At this point in the draft, every prospect will have some flaws. It's about determining who has the greatest upside.

Samuelsson, the son of former NHLer Kjell Samuelsson, had a strong season with the Under-18 team, posting 31 points in 58 games. At 6'3", he has ideal size and plenty of potential.