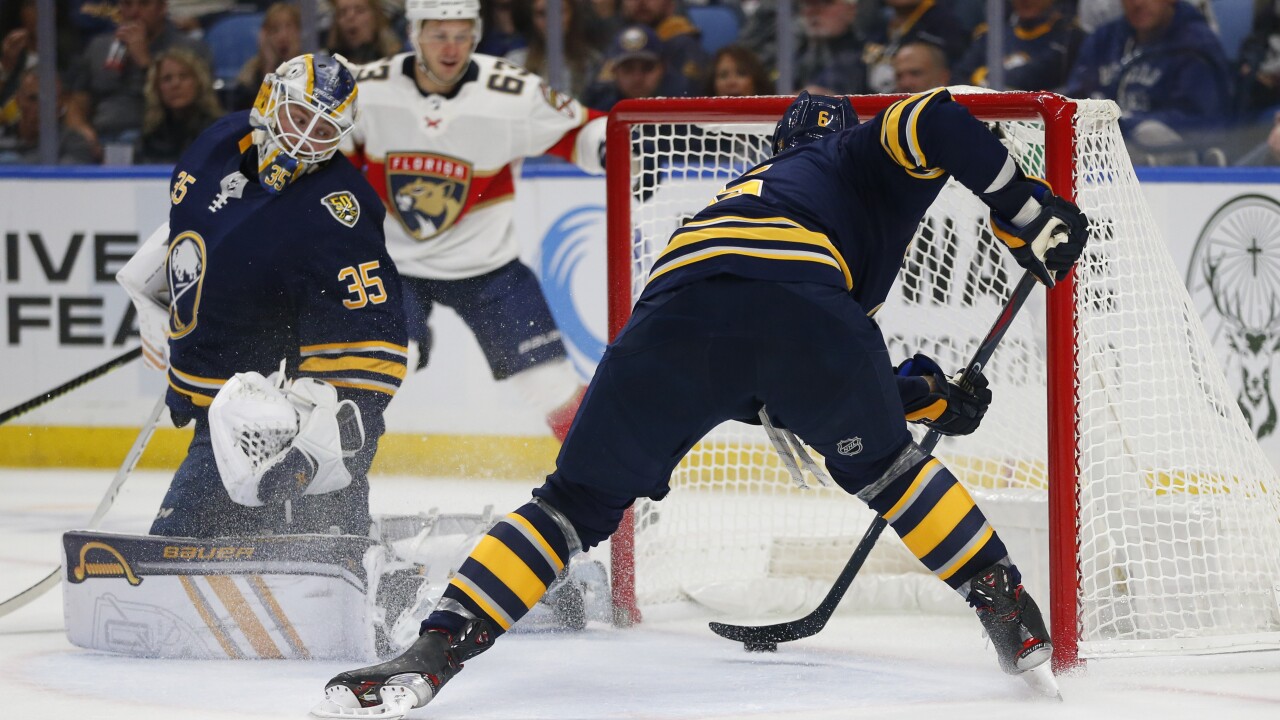 BUFFALO, N.Y. [WKBW] — With their 3-2 shootout win on Friday, the Buffalo Sabres are off to their best five-game start since the 2009-2010 season. Johan Larsson and Marco Scandella scored for the Sabres while Jack Eichel and Casey Mittelstadt sealed the win in the shootout. Buffalo is now 4-0-1 to start the season, despite squandering away two-goal leads in back-to-back games.

Linus Ullmark for his second consecutive start was exceptional. Only this time, his efforts were enough to help lift his team to victory. Ullmark turned away 41 of the 43 shots he faced and stopped both Panthers' attempts in the shootout.

"We know that when we stick to our gameplan we win," Ullmark said after the game. "Are we going to win every game? Probably not, but we have a very good opportunity to do it, as long as we stick with the process and stick with our game plan.

Both goaltenders were lights out in this game and I'm sure the Sabres are very happy with how both Ullmark and Carter Hutton have started the season.

Victor Olofsson has earned the trust of the coaching staff on the power play. He has yet to earn their trust during the crucial moments of the game. For the second consecutive game, Olofsson was glued to the bench in the third period as he watched his teammates rotate taking turns alongside Jack Eichel and Sam Reinhart. While this has some fans frustrated, it shouldn't come as a huge surprise. For a young player, it often takes a long time to adjust to the speed of the NHL game while defending. It will eventually come, it just hasn't happened yet.

Credit where credit is due

Can we please discuss how impressive the line featuring Johan Larsson, Zemgus Girgensons and Kyle Okposo has been? Don't worry, if their success comes as a surprise, you're not alone. Going into the season, I was pretty adamant that it was time to move on from Larsson and Girgensons. I'm here to admit I was wrong. As a trio, this line has been the Sabres most consistent in almost every game. When the Sabres need to regain control, this is the line that comes onto the ice. When it's time to protect a lead, these three hop over the boards. And on Friday when the Sabres needed a goal, these guys delivered. Never, ever, ever break them up.

Kyle Okposo on the early success of his line with Girgensons and Larsson #Sabres @WKBW pic.twitter.com/F1mlCnUF6T

Henri Jokiharju, who is nicknamed the Joker, has been an excellent addition to the Sabres early in the season. Playing alongside Marco Scandella, who struggled last season, the duo has been arguably the Sabres' most effective defensive pairing. In the defensive zone, the pair have looked calm and has done a great job limiting high danger chances.

Then there are the moments when make you wonder why a team traded the 20-year-old defender. One of those came in the first period as Jokiharju fed Casey Mittelstadt with a perfect stretch pass that led to a breakaway. As I said on twitter dot com after the play, there is no way Jokiharju can be sat down when the Sabres blue line starts getting healthier. Now in fairness, Jokiharju did get caught on the Evgenii Dadonov goal. I won't put all the blame on him but he could've done a better job keeping Dadonov in front of him. Nevertheless, the young defenseman has been super impressive in his first five games in Buffalo.

When the well goes dry

There will be nights when the power play just doesn't click. Friday was one of those nights. As I wrote on Wednesday, the Sabres are relying too much on their power play prowess. That's not a bad thing, it's just a reminder that on some nights you can't expect to score multiple goals with the man advantage. Friday doesn't make me think any less of the unit, it just makes me think they aren't robots.