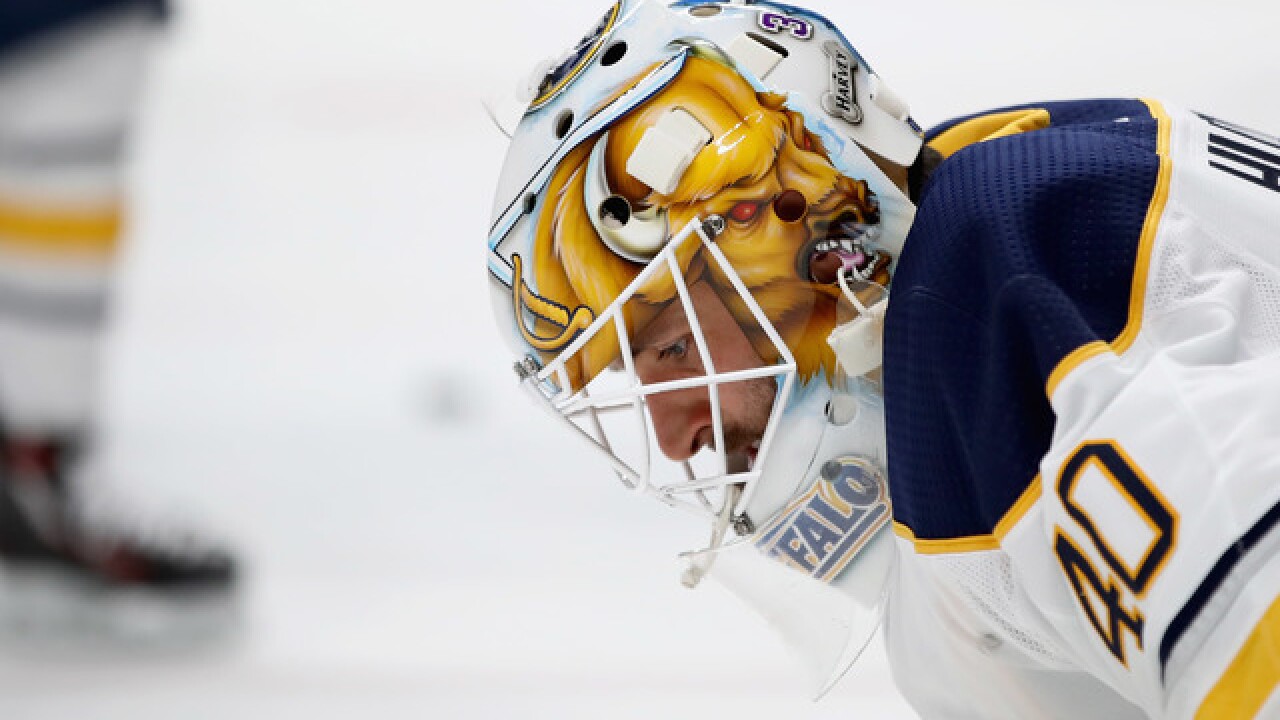 Copyright 2018 Scripps Media, Inc. All rights reserved. This material may not be published, broadcast, rewritten, or redistributed.
Ezra Shaw
<p>SAN JOSE, CA - OCTOBER 18: Carter Hutton #40 of the Buffalo Sabres warms up before their game against the San Jose Sharks at SAP Center on October 18, 2018 in San Jose, California. (Photo by Ezra Shaw/Getty Images)</p>

All good things must come to an end. For the first time since Nov 4, the Buffalo Sabres surrendered two points, snapping their 10 game win streak with a 5-4 loss to the Tampa Bay Lightning. Sam Reinhart scored twice while Zemgus Girgensons and Tage Thompson added goals for the Sabres, who fall to 17-7-2 with the loss.

#Sabres deserve a ton of credit for their turnaround this season. You’re not going to win every game. For my money, Tampa Bay is the best team in the Eastern Conference. Great run by the blue and gold.

“Don’t cry because it’s over, smile because it happened” - Dr. Seuss

Yeah, that’s probably a little dramatic but it seems like it works. Sure, Sabres fans will be upset the blue and gold couldn’t set a new franchise record with 11 straight wins. But in the last three weeks, the love affair with the Sabres in Western New York has been reignited. Sabres games are now must-see TV and ticket prices are no longer cheaper than the beers inside KeyBank Center.

To say 10 consecutive wins is impressive would be the ultimate understatement. Regardless of the outcome Thursday, the Sabres deserve a ton of credit for their recent success.

At this point, your guess is as good as mine when it comes to the severity of McCabe’s injury. But with Marco Scandella already sidelined [day-to-day upper body injury] the Sabres may need to turn to Lawrence Pilut for their game against the Florida Panthers on Friday.

McCabe has been one of the most important players on the Sabres roster so far this season. If he misses any significant amount of time the Sabres will have to do some scrambling and whoever steps into the lineup will have big shoes to fill.

It’s the perfect time of year to have some pie. Some of you may prefer apple, others pumpkin, but right now I’m cutting up a big slice of humble pie.

Two weeks ago I was pretty adamant that Tage Thompson should have been sent to Rochester. Rather than packing his bags and heading down I-90, Thompson has tallied five points in the last six games and has been a big [literally] part of the Sabres success.

I said he should be sent to Rochester lol

On Thursday he picked up his fourth goal of the season, converting on a wrist-shot in the final period to briefly give the Sabres the lead. Thompson has been playing with confidence and using his size to cause headaches for opponents. His reach can’t be taught and his release is elite. Thompson’s recent emergence is significant and if he’s starting to look like the most significant return in the Ryan O’Reilly trade from July.

Class of the East

For my money, the Tampa Bay Lightning are the top dogs in the Eastern Conference and perhaps the NHL. They are loaded up front with Steven Stamkos and Nitika Kucherov while having arguably the best defender in hockey with Victor Hedman. These two teams won’t play again until January 12 in Buffalo and then again on February 21 in Tampa Bay.

By then, I’m anticipating the Lightning will have separated themselves from the rest of the pack in East. It’ll be interesting to see how far behind [or ahead] the Sabres will be for their third and fourth meetings of the year. If nothing else, Thursday should be used as a reminder that despite their massive improvements this season, there are still areas where the Sabres need to be better.

Thursday’s matchup in Tampa Bay got pretty testy. It all started with a boarding penalty halfway through the first frame when Jack Eichel pushed Ryan McDonagh from behind into the boards. Tampa Bay immediately went after Eichel as both teams started pushing and shoving until they were eventually separated.

But wait, there’s more! In the final seconds of the first period, Zach Bogosian and Nathan Beaulieu starting chucking knuckles and a big scuffle ensued. From that moment on, the two teams went at it for the rest of the night.

New rivalry brewing between the #Sabres & #Lightning ? I dig it.

Perhaps this is the first chapter in a new Atlantic Division rivalry? If that’s the case, we’re going to be in for some fun games for years to come.